Alanis Morissette, The The, Aslan and Damien Dempsey some of the must sees 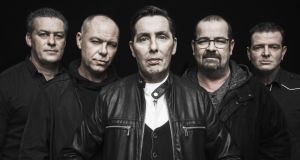 The rousing singalong: Don’t pretend you don’t know every single word to Ironic. All together, now: “It’s like raaaaaaaain . . .”

The best album: She’s had plenty of hits over the past three decades or so, but none of them have quite lived up to 1995’s Jagged Little Pill which became one of the biggest-selling albums of that decade.

Why you should bother: Because it’s been quite a while since she last played ’round these parts, and recent setlists suggest she has a hit-laden night in store.

Fun fact: Young Alanis was a child star of sorts; her career was launched with numerous appearances on Canadian teen comedy sketch show You Can’t Do That on Television.

The rousing singalong: There are some modern classics in the Eels canon, from Novocaine for the Soul to Susan’s House – but Mr E’s Beautiful Blues from 2000’s Daisies of the Galaxy, is just so damned uplifting.

The best album: Tough one. Most of the band’s 12 albums are very different to each other – but there’s no doubt that 1998’s Electro-Shock Blues, written after a period of personal crisis after the deaths of his mother and sister, is still a stunning piece of work.

Why you should bother: Because Mark Oliver Everett (aka “E”) is one of the most fascinating, versatile and complex frontmen in rock music – and they’re a superb live band.

Fun fact: When E was in seventh grade he went to see The Who in concert, where an errant laser beam caused damage to his eyes. He has worn glasses ever since.

The rousing singalong: Matt Johnson’s band have been an ever-fluctuating, constantly experimental and quietly influential force over the past four decades, but 1986’s Heartland was one of their biggest hits.

The best album: Their second album Infected (1986) remains a modern classic and a seriously underrated gem.

Why you should bother: Apart from the fact that it’s their first tour since reforming last year, Johnson’s dad passed away very recently and gig cancellations were impossible for “financial reasons”. That’s gotta be tough – so what better way to lend your support?

Fun fact: Johnny Marr, Neneh Cherry and Sinead O’Connor are just some of the musicians who’ve collaborated with, or been members of, The The over the years.

The rousing singalong: If you really need to ask, of course it’s Crazy World. But don’t make the mistake of taking a portaloo/bar break and missing This Is, either.

The best album: Considering these gigs are celebrating the 30th anniversary of their debut Feel No Shame, you’d do worse than to revisit that album, which still holds up three decades on.

Why you should bother: Because whether you’re a fan or not, Aslan is the perfect example of a band who’ve retained its integrity and still put on a killer show, packed with hits and plenty of feelgood moments.

Fun fact: Frontman Christy Dignam was destined to sing from a young age; he studied the classical art of bel canto singing as a youngster, although he turned to rock in the early 1980s when he formed Meelah XVIII, the band that would later become Aslan.

The rousing singalong: Wherever it’s heard, played or sung, Apple of My Eye never fails to bring a tear to the eye, a lump to the throat and a goosebump to the arm.

The best album: 2005’s Shots usually gets all the plaudits, but there is a rough-hewn charm to its predecessor Seize the Day, which sees the Dubliner alternate between combative and charismatic.

Why you should bother: Because when it comes to singing all your cares away, Damo is the man. It’s a form of therapy, really.

Fun fact: He has previously spoken about a collaborations album that’s in the works, featuring the likes of John Grant, Morrissey and Kate Tempest. We’re waiting patiently for the official announcement, Damo.

The rousing singalong: If you’re a radio listener, you’ll already know the catchy-as-hell Bear Claws, a track that dominated the Irish airwaves last year with its dinky little “Ayyy...oh!” chorus.

The best album: Well, the young Westmeath band have only had one so far – but last year’s debut Tales from the Backseat was a very promising endeavour, marrying perky indie-pop with memorable choruses, dazzling melodies and a songwriting maturity beyond their years.

Why you should bother: Because it’s their biggest headline show to date and they’ll only get bigger from here on in – but, as they proved with their recent support slot to The Rolling Stones at Croke Park, they’re more than capable of handling it.

Fun fact: They started out playing covers in a Mullingar pub before they were even old enough to drink – where they’d also sometimes encounter their teachers bopping away. Awkward.

For more information on shows at Iveagh Gardens, visit aikenpromotions.com.