Bringing a new drug to market takes years, costs billions and the failure rate is high 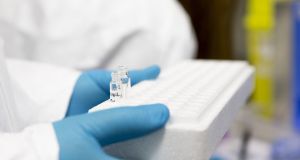 Drug development is already long, expensive and risky. With new blockbuster drugs harder to come by, the challenges facing drugs companies are set to intensify.

“It is estimated that to get a new prescription drug out into the market costs $2.6 billion,” says Tom O’Leary, chief information officer of ICON, a global clinical research organisation for drug development.

ICON develops drugs on behalf of the pharmaceutical, medtech and biotech industries by recruiting the physicians and patients into the studies required to prove the safety and efficacy of drugs, as well as seeking permissions from regulatory authorities.

Developing a new drug takes time, typically 8½ years before a drug is ready to go to market, he says. The failure rate is high. Some 88 per cent of what is in the industry’s development pipeline at any one time will likely fail, leaving only 12 per cent of those that start into clinical trials ever making it to market.

Such trials take place in phases, each more costly than the last. Phase 1 refers to the first time a drug is administered to a human, in a trial typically involving between 20 and 50 patients, “to understand how the drug or device is tolerated, and making sure there is no safety concerns”, says O’Leary.

Phase 2 typically looks at finding the optimal dosage of the drug, and the frequency at which it should be given. Trials at this stage typically involve between 2,000 and 3,000 patients.

The next stage, Phase 3, involves between 3,000 and 10,000 patients, and takes more “real-world information” into account, such as the patient’s medical history, rating scales for pain, patient diary assessments and physicians’ notes. All such data must be captured and measured.

Studies into areas such as cardiovascular or oncology drugs at this stage can take five to seven years to assess. For rare diseases, it takes even longer, typically between 10½ and 13 years, because it can be harder to find patients and additional sets of assessments may be required.

Phase 4 of drug development refers to the assessment work that is carried out after a drug has received approval. This helps identify anomalies such as the fact it might not work for specific pockets of the population, or in combination with drugs for other conditions. It’s during this period that product recalls can take place.

All of this must also be done in the face of competitive challenges – someone else’s new drug may turn out to be more effective, or cheaper to use, than yours.

A slowdown in the number of blockbuster drugs coming onto the market, and the fact that many earlier ones have come off patent, is giving drug companies additional impetus to look harder at drugs for rare diseases, helped by advances in genetics.

Technological advances are helping, including the advent of wearable devices which can feed data back into the trial in a much more efficient manner, particularly for patients suffering from ailments such as depression or degenerative neurological conditions related to ageing.

They also do away with “car park syndrome – where patients fill in their forms for the past two weeks in the doctor’s car park”, says O’Leary.

But if the failure rate for drugs going through clinical trials is high, that for drugs at pre-clinical development stage is even higher, estimated to be as high as 99.6 per cent, says Sean O’Keefe, head of KPMG Ireland’s life sciences group.

Drugs companies are also under huge pressure to bring prices down, by government and insurers, particularly as people are living longer. “Yet when you are developing drugs for smaller patient populations, the cost is high – and the successes have to carry the cost of the failures, otherwise no one would do R&D at all,” says O’Keefe.

Companies coming to market now must show how they have greater effectiveness than existing drugs. The regulatory burden is increasing too.

“The process of inventing, testing and bringing to market a new drug is complex and expensive, involving multiple layers of law and regulation,” says Ciara Farrell, senior associate at law firm Arthur Cox.

The firm works with clients to help them balance speed with attention to detail in negotiations with physicians, hospitals, contract research organisations, and government bodies.

While great progress has been made in recent years in Ireland to advance clinical trials, Ireland typically has a low participation rate compared to its EU counterparts. “Ireland is uniquely placed to take on a lead role for clinical trials in Europe post-Brexit as the only English-speaking country in the EU, our internationally regarded health professionals and the leading global CROs based here play an important role,” Farrell says.

The implementation of the new Clinical Trials Regulation will facilitate Ireland-based sponsors conducting EU-wide trials. “Submissions have been simplified from what might have been 28 submissions to just one. However, certain aspects will not be covered by the regulation and will remain country-specific, such as ethical considerations, site requirements and some administrative procedures,” says Farrell.

Closer to home, the Irish legislature is currently debating legislation that has the potential to encourage health research in Ireland by proposing a voluntary mechanism for obtaining a single research ethics committee (“REC”) approval for health research that does not fall within the scope of a regulated clinical trial.

“While getting REC approval is not a legal requirement for ‘unregulated research’, the internal procedures of the health institutions commonly necessitate researchers to submit an application for approval to the REC in each institution in which the research is conducted,” Farrell says.

This results in a fragmented and time-consuming exercise for researchers who wish to conduct research in more than one clinic. “Another aspect of the draft legislation that may encourage research is the option to make a parallel application to the Irish Data Protection Commissioner to allow for the collection and use of personal health data without the consent of the data subject taking part in the research.”

‘Ten years of innovation in 10 weeks’: the role of life sciences in Covid response

Ireland’s potential to be digital-health powerhouse

MSD Ireland inspiring the next generation in Stem

A year of world-class innovation in Ireland