Ensuring life goes on: the life sciences sector in Ireland 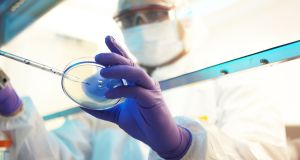 Eight out of the 10 largest medical device companies in the world – including Pfizer, Boston Scientific, Bayer and Medtronic – have substantial Irish operations

A healthy environment, allowing for both medical innovation and entrepreneurship to thrive, has been attentively nurtured through consistent government policy, making its continued success possible. In a globalised economy, however, things could change rapidly should complacency get the better of us.

Eight out of the 10 largest medical device companies in the world – including Pfizer, Boston Scientific, Bayer and Medtronic – have substantial Irish operations.

Ireland’s reputation as a good place for MNCs to do business is frequently associated with some of the more recent relationships forged in “new” industry sectors where digital technologies, ICT, social media and other web-based enterprises are the norm.

However, they represent what could be defined as the “second wave” of MNCs to play their part in the story of Ireland’s economic success. The biggest players in the Life Sciences sector have recognised the benefits of doing business here for over 40 years. Because of this, major health and medical breakthroughs have either begun or been developed right here in Ireland.

A healthy combination of state-led support for medical and health research activity, paired with the requisite business acumen, have been central to attracting large medical companies – working in the highly profitable Life Sciences sector – to choose Ireland.

Why? Deloitte Director in Consulting Tom Hynes believes a number of key developments – some by design, some by circumstance – have led to this phenomenal growth story.

“Ireland’s Life Sciences industry benefits from a number of attractive characteristics including a deeply connected life sciences community driving collaboration, networking and the sharing of opportunities across companies for mutual benefit,” he says. “Along with government agency support, the deep Irish Life Sciences network has been a key enabler in supporting companies to expand operations in Ireland.”

Secondly, low corporate tax rates have provided visible savings to business operating costs making Ireland a more competitive location for MNCs than our own international competitors. “Not only that but attractive research and development (R&D) tax incentives and funding packages have been made available to companies performing these critical functions in Ireland,” adds Hynes.

Deloitte’s Ireland Director for Consulting also stresses the importance of a consistent commitment to product quality guaranteed by stringent policies and procedures. Irish regulation is highly regarded by international regulatory authorities such as IMB, FDA and EMA.

“Irish certification agencies work in accordance with both European and global standard procedures,” he says. “Ireland’s reputation in regulatory compliance is first class and enables companies operating in the Life Sciences sector to achieve trouble-free compliance while also ensuring that all regulatory requirements are met.”

Being a small country with a shared focus has meant collaboration between government, academia and industry has been easier to realise and has created not only added value to Ireland’s image as a hub for Life Science enterprises but helped foster a culture where indigenous growth can emerge too.

The announcement that Royal College of Surgeons Ireland, Science Foundation Ireland (SFI) and Biotech company Shire, in partnership with the Irish Haemophilia Society, are jointly conducting a major new €4 million, patient-orientated study, is the most recent example of how well-established the collaborative approach has become in Ireland. The study, entitled “The Irish Personalised Approach to the Treatment of Haemophilia (iPATH)”, will “develop new and innovative approaches to improve the clinical care of patients with the inherited bleeding disorder haemophilia. Existing patients with haemophilia are still subject to a standardised treatment that was developed 50 years ago. The iPATH study seeks to revolutionise the current “and develop a new personalised treatment approach that will tailor treatments based on the needs of the individual patient”.

The iPATH partnership combines the best expertise from industry and academia to improve treatment options and outcomes for patients with haemophilia worldwide,” said Director General of Science Foundation Ireland and Chief Scientific Adviser to the Government of Ireland, Professor Mark Ferguson. “Science Foundation Ireland are committed to supporting collaborations such as these, which can significantly improve our health care services and create impactful research outcomes.”

The Role of The IDA

Of course it would be remiss to try to explain why Ireland’s Life Sciences sector continues to thrive without mentioning the pivotal role played by the IDA. “The IDA has been key in the attraction and development of FDI of all kinds into Ireland,” says Hynes. “Not only does it attract global business into Ireland but it also plays an important role in collaborating with existing foreign investors to expand their footprints ensuring global businesses that locate here, remain here.”

The Danger of Complacency

As previously stated, eight out of the top 10 largest medical device enterprises in the world have operations in Ireland. That’s an impressive accolade. But how do we maintain our position at the top? By innovating in tandem with the Life Sciences sector. “The life sciences industry is changing quickly and Ireland needs to ensure it is in a position to innovate and adapt,” stresses Hynes. “Emerging trends point to the following; The era of digitised medicine which will require new business models. In addition, Health data is becoming more pervasive requiring new tools and provider models helping to transform diagnosis and personalised treatment.”

More R&D partnerships, like the aforementioned iPATH, will also need to be created through closer ties between industry and academia as well as other, traditional and non-traditional stakeholders.