While more students are taking science subjects for Leaving Cert, a substantial increase in the number of Stem graduates is needed to fill skills shortages 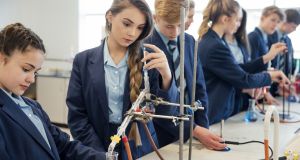 Forty three per cent of all higher-level Stem sittings are by female students, an increase of two percentage points in the past five years. Photograph: iStock

In 2017, the Government set out an ambitious plan for Ireland to have the best education and training service in Europe by 2026. A Stem education policy statement and implementation plan formed a key part of this.

Among other ambitions, it set out:

– A 20 per cent increase in the number of students taking chemistry, physics, technology and engineering at Leaving Cert level.

– A 40 per cent increase in the number of females taking Stem subjects for the Leaving Cert.

– Ensuring that all schools, learners and parents have access to high-quality information on the diversity of Stem careers.

Two years on, how much closer are we?

Caroline Spillane, director general of Engineers Ireland, says we are seeing positive indicators of improved performance in Stem education, with the total number of higher-level Leaving Cert Stem sittings up by 5 per cent from 2017 to 2019, while 31 per cent of students now take the higher-level maths paper compared to 28 per cent in 2017.

“In 2017, a survey of Engineers Ireland members found that 86 per cent of engineers believe that parents, teachers and career guidance counsellors can do more to break down the societal barriers to girls studying engineering-related subjects,” says Spillane.

“There is a growing interest in Stem among young women, but men still greatly outnumber women at each stage of engineering higher education and apprenticeships. Now, more than ever, it is incredibly important for policymakers, parents and us all in industry to play our part in building further awareness and interest in Stem, and particularly engineering, as a creative and diverse profession among female students to overcome the gender divide.”

Many of the core traits required for Stem, including curiosity, exploration, creativity, problem-solving and collaboration, overlap with the principles of early childhood education including discovery and exploration, says Spillane. “These links could be highlighted and made more prominent for teachers and parents. Learning environments which embrace the complexity of the world should be used to encourage critical thinking and problem-solving from a young age. Real-world applications of engineering should be promoted in student learning and assessment, initial teacher education and teachers’ professional development.”

Increased Stem graduate numbers are needed in many sectors of Ireland’s growing economy. Some areas, particularly civil and building engineering and computer science, are seeing ongoing shortages, while the pharmaceutical and life science sectors are constantly hiring– and, of course, very keen to get their hands on the top talent.

“We would like to see a substantial increase in the number of Stem graduates, particularly engineers from a variety of disciplines, in the coming years,” says Spillane. “To increase the number of young people choosing Stem careers, funding for coordinated national outreach should be increased. Particular attention should be paid to women and construction careers.

“Core funding per student at higher level has decreased detrimentally in the recent period and, in some institutions, laboratory equipment and other facilities have almost become obsolete. Inadequate resourcing undermines teaching, learning and research and the ability of our higher-education institutions to be globally competitive. A sustainable funding model for higher education is urgently needed, including core funding, programmatic funding, infrastructure investment and industry-academic collaboration.

“Digitalisation is becoming pervasive in our daily lives and is driving a revolution in global manufacturing generally referred to as Industry 4.0 – the fourth industrial revolution. To ensure Ireland’s manufacturing base – especially SMEs – provides high-value employment and growing exports, investment and coordination is required in higher education, re-skilling and apprenticeships. A culture of lifelong learning should be ingrained – embracing technical competence in combination with emotional intelligence, creativity, communication and ethics.”