Robo-lawyers, blockchain conveyancing and online courtrooms – welcome to the future of the legal profession 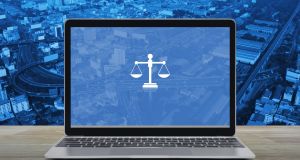 The Irish Courts Service is planning to introduce virtual courts which would allow cases to be heard without anyone having to actually appear in a courtroom. Photograph: iStock

The rise of the robo-lawyer

It may sound like something out of science fiction, but the robo-lawyer is already with us and has been fighting cases since 2015. DoNotPay was created by entrepreneur Joshua Browder in 2015 when he was just 17. Originally devised as a mobile phone app to fight parking tickets in the UK, it has since been expanded to all 50 states in the US.

The AI-powered app goes through all the usual questions such as if signage was clearly marked, if there was a medical emergency and so on and then creates a letter to send to the relevant authority.

New functionality is constantly being added and DoNotPay can also be used to seek compensation from airlines for delayed flights and to fight cases in the US small claims court.

The term Moneyball was invented by author Michael Lewis to describe the application of advanced mathematics and statistics to recruitment for the Oakland Athletics baseball team in the early 2000s. The team was able to successfully compete against much higher spenders as a result. This approach is now being brought into the courtroom.

One US IP litigation company, Lex Machina, has created software which scans millions of court decisions to identify useful trends. It can even determine with great accuracy the type of argument likely to impress particular judges or the strategies which have proved most successful for opposing lawyers. Other companies are taking the technology a step further and producing software which they claim can accurately predict the outcome of a case before it goes to trial.

Property conveyancing has long been seen as an irritating and expensive necessity for home buyers and sellers. The time-consuming process requires a legal professional to establish that the seller really does own the property and that the ownership is enforceable in a court of law – otherwise known as title.

This has to be done every time the property changes hands, but that could change if blockchain is used.

Blockchain is the tamper-proof online distributed ledger system that underpins cryptocurrencies such as bitcoin. As long ago as 2017, the UK Law Society Gazette reported on the first blockchain- based property transaction in that country.

The sale of a commercial property in Trowbridge, Wiltshire, took just three days to complete and will take just seconds next time around thanks to all the details and proofs being stored on a file in the blockchain. Good news for consumers, by the look of it.

Just last month it was revealed that the Irish Courts Service is planning to introduce virtual courts which would allow cases to be heard without anyone having to actually appear in a courtroom. Plaintiffs and defendants and their lawyers would file their papers and pleadings online and a judge would make a decision having reviewed the evidence and arguments made.

The initial intention is to use the system for road traffic offences, which account for 60 per cent of all cases handled by the District Courts while it is also hoped to use it for routine appearances in front of superior courts for scheduling cases and so on. The first virtual UK court case with a claimant using their laptop camera to appear was held back in March 2018, so it can’t be too long before this happens here.

With American lawyers, it’s not a case of asking Alexa or saying “Okay Google”, they just ask Ross, a new, automated legal research assistant. Hundreds of legal firms throughout the US have signed up for the system, which is powered by IBM’s Watson AI platform.

It responds to natural language and searches vast legal databases for answers in a tiny fraction of the time it would take a human lawyer or legal assistant. Even more impressively, the technology learns over time and gets better and faster with use.

Making the case to attract the best talent

Growing diversity and inclusion in the legal profession