Employment prospects in the brave new world? Here are 10 occupations guaranteed to keep you working 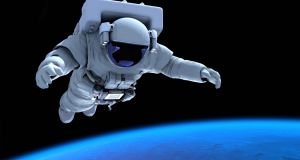 With American astronauts due to return to the moon, and plans for an eventual mission to Mars, there will be job prospects in the area. Photograph: iStock

The world’s population will tip 10 billion by 2050. That’s a lot of mouths to feed and feeding them in an efficient and sustainable manner is the challenge. All sorts of innovations will be required, from a proliferation of hydroponics, growing traditional farm produce in factory settings, to the development of entirely new kinds of livestock. The farmer of the future will likely be raising ants instead of cattle, shepherding crickets instead of sheep. All the buzz right now is about beetles, caterpillars and locusts too, given they already supplement the diets of some two billion people in parts of Asia, Africa and Latin America. Quotas will be a nightmare to manage, mind.

Farmers of a different kind are already working in labs, busy husbanding ‘meat’. In fact, whether to call lab-grown protein meat is currently being hotly debated. Also known as cultured meat, clean meat, synthetic meat or in-vitro meat, it’s a dish that has been cooking up a storm since the world’s first lab-grown burger was eaten at a press conference five years ago. It was cultivated in a lab using cells from a cow. Since then, whether for health, climate change or animal-welfare reasons, veganism has taken off so you can expect its merits to be debated until the cows come home. Except, of course, there’ll be no more cows.

In December 2017, US president Donald Trump signed a directive that marked the first step towards returning American astronauts to the moon. The aim is not to put conspiracy theorists to bed with a dose of petulance but to establish a foundation for an eventual mission to Mars. Meanwhile, Tesla boss Elon Musk, who famously expressed a desire “to die on Mars, just not on impact”, has been boldly going on ahead of them with his SpaceX mission, and plans to land his first cargo delivery on the red planet by 2020. The aptly named landing page of the SpaceX website has a lovely quote from the man himself, to wit: “I can’t think of anything more exciting than going out there and being among the stars”, which suggests he could do with a Ted talk – a Father Ted that is – explaining the difference between small and far away because, of course, Musk is already among the stars right here on earth.

Plastics in our food, contraceptive pills in our water supply or radiation from our mobile devices? Or could it just be tight underpants. Scientists across the developed world are all worked up trying to figure out our falling fecundity. Across Europe, the US and Japan, populations are struggling to keep up the replenishment rate of 2.1 children per woman. Work-creep facilitated by smartphones, the cost of childcare, and mood-killing stress all takes a toll. On top of which couples are getting together later, meaning women are having children later, but evolution hasn’t quite kept pace in terms of an ability to conceive later. It all combines to create a very fertile environment indeed for specialists selling fertility treatments.

The flip side of the low-birth-rate coin is that these same populations are getting older, fast. Even China, where fears of overpopulation led to an often brutally enforced one-child policy, the push is on to get women to now have two. The reason is a dawning realisation that someone is going to have to pay for the elder care needs of ageing populations. Across Japan – a pioneer in terms of ageing – schools are being repurposed as nursing homes and humanoid robots such as Pepper sold to old people as companions. According to manufacturer SoftBank, “Pepper is the first humanoid robot capable of recognising the principal human emotions and adapting his behaviour to the mood of his interlocutor”, which to be fair, is more than your typical adult child will do.

Anything to do with health and beauty is safe long into the future, at least until we swap ourselves for cyborg avatars. Figures from US plastic surgery organisations show the market is in great shape, with $16 billion spent in 2016 alone, and boob jobs, liposuction, nose reshaping, eyelid lifts and tummy tucks being the top five requests. But the biggest trend is in plastic surgery for men, “to enhance their looks and build confidence”. The pressure to be Insta-ready at all times ensured more than 1.3 million cosmetic procedures were performed on men in 2017 alone, as the stronger sex fall victim to the same pressures as women to be well groomed, buff, and with weirdly plucked eyebrows.

Sorry, data analyst. There is no doubt that digital technology represents a wonderful advancement in all our lives, enabling us to be on call 24/7 for work and to take confectionary orders from kids as soon as we leave the house. The trade-off for all this progress is that as soon as you mention, say, dentist, in the vicinity of your phone, you get bombarded with advertisements for implants, dentures and, shuffling in their wake with its hand cupped over its ear, hearing aids. Now we have in-home devices such as Alexa and Echo to suck up all our conversations, the last vestige of privacy is lifted from us entirely. Leaving aside the cyber risk – it’s coming next – the fact remains that someone will always be needed to make sense of all our conversations in order to digitally tip off advertisers. Or at least write the algorithms to do it.

You can’t lose with this one. Data is growing exponentially as software continues to eat the world and the internet of things ensures your fridge talks to your printer about you, and nothing good you can be sure. All the while hackers are hiding in your WiFi, figuring out your passwords and buying three-piece suites on your plastic. Businesses are particularly vulnerable and, with new data protection regulations liable to cost them millions for infractions, they’re going to need good cyber security in perpetuity. What’s great about providing it is that, even if you fail, all you have to do is blame those damn hackers for always being ahead of the game. It’s what everyone expects. In the meantime, you can make a mint safe in the knowledge that the one risk they’ll never take is getting rid of you. You know too much.

You know the hoary old chestnut about the hacker who was so good the FBI hired him? Well it managed to spawn an entirely new job that, for many of the same reasons above, is another banker for the future. An ethical hacker, sometimes called a White Hat Hacker, is employed to do his (and possibly her, though with tech you can’t assume) damndest to breach a company’s security system. It’s fun, it’s edgy and you get paid a mint. You’ll have to be certified mind you, because nothing says you are legit like a piece of paper.

First we had mumblecore, then came mumble rap, so it’s no wonder we have a generation of youngsters for whom mumbling is a badge of honour. Unfortunately, their lack of articulation is coming at a time when young people were already turning away from old-school methods of communication such as talking on the phone. Or, God forbid, in person. Elocution here has got nothing to do with accents or notions of received pronunciation. It’s about the fact that not everything can be said or done via an app. It’s about business owners who really need people with selling skills such as the ability to speak clearly while maintaining eye contact at the same time. Unless of course the whole mumble thing is a way of ensuring Siri can’t listen in to their conversations, in which case kids, as you were.

Also in Future of Work

Tapping into the new world of work

Why robots are a worker’s friend

What’s ahead for AI in the workplace?

Learning curve: the importance of upskilling

Talent spotting: the battle to attract the right people

Gyms, cinemas and robots: welcome to the workplace of the future

Older and wiser: the new generation of workers

How millennials are redesigning the future of work

Working in a constantly changing world