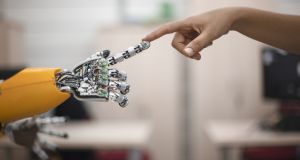 The workforce and workplaces of the future will be very different to those we know today. Few people will have their own desks as home and remote working will increase quite dramatically, while the concept of a job for life or even for a few years will disappear to be replaced by careers which are dependent on continual learning, development and upskilling. And many of the jobs which exist today will be made redundant by automation and artificial intelligence but will be replaced by new roles which have yet to be invented.

“A recent Deloitte survey found that 65 per cent of the children entering primary school today will be employed in jobs that don’t yet exist,” says MERC consultant Katy Carolan. “We have to prepare for that. There is a lot of discussion now about how the workforce is changing and a big part of that discussion is around the disruption caused by automation, artificial intelligence and so on but we have to look at what the workforce is made up of as well.”

She points out that so-called millennials – those born between 1981 and 2000 – now make up more than half of the workforce. “They have much different expectations,” she adds. “They are looking for mobile work environments and the idea of spending their entire career with one employer is anathema to many of them. They may only spend 18 months with any organisation and employers have to be aware of that.”

And while working lives will get longer, careers might actually get shorter. “People will have multiple careers for multiple employers,” says Carolan. “We are starting to see more people working as freelance consultants. Maybe job security isn’t so important any more. A lot of people are comfortable with this but lots aren’t.”

PwC director of people and organisation Gerard McDonough agrees. “We have already seen the emergence of the gig economy. People won’t be tied to organisations for 30 or 40 years any more. They might spend 20 years in one place and 40 coming and going to others.”

But there is little time to prepare for this. “The future is upon us now,” McDonough adds. “It’s not something you can wait for. And the pace of the transformation and change means that if anybody says they understand how it’s going to look in 10 years’ time they’re making it up. It’s really hard to get it right and if you’re not looking at it every six months you’re in trouble.”

He points to a recent PwC report based on a survey of 10,000 people around the world which gave some insights into what the world of work will look like in 2030. The Workforce of the future: the competing forces shaping 2030 report pointed to four future scenarios or worlds which may dominate by then.

The red world is based on innovation and the race to get ahead of everyone else and give the consumer what they want; the blue world is where corporate is king and big company capitalism rules; the green world companies care and social responsibility and trust dominate; while in the yellow world humans come first and social- and community-based businesses prosper.

“None of us can know with any certainty what the world will look like in 2030, but it’s likely facets of the four worlds will feature in some way and at some time”, McDonough notes. “Machine learning and AI will help us do a much better job of workforce planning in the future, but we can’t sit back and wait for the future of work to happen.”

Mark McKeon, global head of investment analytics with State Street Global Exchange is another who sees the change happening now. “We are already seeing the impact of new technologies and new tools on the type of jobs people are doing and that will accelerate”, he says. “For example, at State Street Global Exchange we are delivering new capabilities to clients. We are offering them new proprietary investment analytics services and this represents a huge shift. Traditionally asset managers would have seen analytics as an internal function but they are now outsourcing it and leveraging off the expertise of companies like State Street.”

This has implications for the workforce. “We will need people with academic backgrounds in areas like maths, physics and other sciences at Master’s or even PhD level. But they will be working face to face with clients so we need people who understand what clients need as well. We are also developing new ways of researching and new forecasting methodologies around things like Brexit and these will require very different skillsets.”

Employers will have to assist workers to acquire these skills but will also have to adapt the workplaces to accommodate new ways of working, according to Joe McGinley, chief executive of Iconic Offices. “The lines between work and play are becoming more and more blurred and people are now spending more time in workplace. It’s not just 9 to 5 anymore. They often stay late after work to eat, drink, or even play a few games with colleagues. They might be doing collaborative work with colleagues across the kitchen table or just hanging out with them. If employers want to attract and retain the top talent they will need to cater for these different ways of working.”

John Ryan, chief executive of Great Place to Work, believes that diversity will be key in preparing for these changes. “Organisations are going to have to build genuinely diverse workforces,” he says. “But not just in terms of gender, ethnicity and abilities. We have workplaces where the people might look different but they think the same. You need cognitive diversity, otherwise you have no innovation. In many cases, organisations are afraid to bring people in who think differently. But the new thinking is what organisations need is really smart people. It’s not just skills that are required, it’s people who want to grow and develop and have that plasticity to adapt and think differently. Employers need to grow an adaptable, diverse workforce to keep pace with change.”