With candidates increasingly judging prospective employers on their culture, what are the implications of this relatively new phenomenon 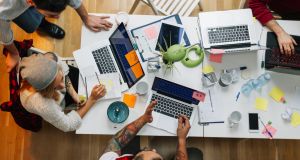 Former IBM chairman and chief executive Louis Gerstner famously said: “I came to see, in my time at IBM, that culture isn’t just one aspect of the game, it is the game.” He believed that every aspect of an organisation’s success was dependent on its culture. But how can a concept like culture be applied to something like a workplace?

“Merc consultant Katy Carolan agrees that it can be hard to define. “It is difficult to articulate what culture is,” she says. “But it does matter and it affects the bottom line. If your customers and employees buy into the culture, that builds engagement and loyalty to the business and contributes to the bottom line. But the culture piece is hard, I don’t know of any organisation that has got it 100 per cent perfect.”

Alignment is a word that comes up time and again. “There has to be an alignment between what you say and what you do,” says Gerard McDonough of PwC. “For example, organisations claim they are committed to innovation but then don’t give people time to devote to ideas.”

Carolan agrees. “There needs to be an alignment between culture and business strategy. No matter how strong an organisation’s culture is, it must align. Culture is set at leadership level and by employees. If there is a shared mission and values, then you will have a culture that works. If not, employees can become disengaged and the company becomes dysfunctional. A lot of it comes down to communications – you have to be consistently clear in your message to customers and employees.”

Workplace relationships also matter, according to Holmes. “You can have all the programmes you like but they won’t help if you are working for a poor manager. Workplace culture is very much related to the person you report to; it’s about the people in management roles. If they are promoted for their technical competence rather than leadership capability, you can have poor outcomes. This affects the culture. Organisations need to focus on strengths when promoting people. The other thing they need to do is invest in their cadre of managers and leaders in terms of leadership development and management development programmes. This will help foster a culture where they share ideas and challenge and support each other.”

Iconic Offices chief executive Joe McGinley says culture is very important to younger workers. “People coming into workforce now are really looking for a cause, not just highest paid jobs,” he says. “They want to join companies that interest them and where they believe can bring about change. They want to feel that they are part of a team working towards a common goal. In many ways, they are choosing a lifestyle through work. They also want to ensure that their vision and that of the company are aligned. Most of all, they want a sense of purpose. This means that companies have to set out a clear vision of what they do, where they are going, and what they are trying to achieve.”

And that doesn’t mean workplace frills. “It’s not all about ping-pong tables and arcade games,” he points out. “Employers have to offer people a workspace where they can move around and do their best work. Sticking a games table in the corner doesn’t do it.”

The right culture can also inspire greater loyalty among staff, according to Great Place to Work chief executive John Ryan. “People are now happier to drift from workplace to workplace, and loyalty to organisations is disappearing,” he notes. “It is being replaced by loyalty to ideas and people. This means that they will join organisations where they admire the leaders. Organisations can definitely make themselves more attractive culturally.”