Your guide to Pride 2019: the events taking place across the country 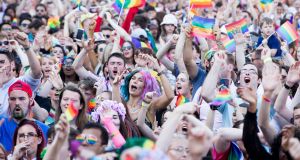 This year’s theme is Rainbow Revolution and promises to be the biggest, most colourful yet. Dublin Pride Parade enjoyed a record turnout last year, at over 60,000 people, and the hope is that this year’s will be even bigger as it returns to O’Connell Street.

Assembling at Parnell Square, the parade features floats, marching bands, colourful costumes and loads of noise as it wends its way across the Liffey at Talbot Memorial Bridge heading to Pride Village, a free outdoor event in Merrion Square.

Some 7,000 people from over 150 different groups will make up the parade, and visitors are welcome to cheer them on from the sidelines and join in and follow them.

There are loads of other events being organised in the run-up to the parade, including EPIC LGBTQ+ Tours at The Irish Emigration Museum, Custom House Quay, Dublin 1, on June 20th. Head to Dublin’s GPO on June 21st for a guided tour that celebrates the diversity of the women and men who took part in Ireland’s struggle for freedom.

The same day sees the Dublin Pride Run at the Phoenix Park, for its eighth year. The slogan for this year’s run is “We are the Champions”, it’s organised by the Dublin Frontrunners and is an Athletics Ireland-accredited run that has, since its inception, raised nearly €60,000 for LGBT charities. The designated charities this year are Belongto, ShoutOut and HIV Ireland.

Take a guided tour at the National Gallery of Ireland, on June 24th, to explore the LGBTQIA+ works in the Gallery’s permanent collection, while the next day sees the Outing Festival Geílí, a Ceílí with a twist, including gay matchmaker Eddie McGuinness, at the Pantibar, Capel Street.

There’s so much more, including a Show Tunes Pride Special at The George, Pantibar’s all-day Pride Street Festival, Trans Pride, a Ride4Pride Spin Class and a Pool Party at the Markievicz Centre.

Limerick LGBTQ Pride Parade 2019 runs from Friday, July 5th to Sunday 14th, with the Limerick LGBTQ Parade taking place on Saturday, July 13th. The event starts and ends at City Hall and organisers are calling on participants to be loud, bold and daring, and to make the most of what promises to be a riot of colour, dance, music, street performance and theatrics.

After that comes the city’s biggest ever after-party, Limerick Pridefest 2019. It’s a free family-friendly event in the gardens of the Hunt Museum, with bouncy castles, ice cream vans, cafe and bar, plus live music from Voice of Ireland’s Emmett Daly and Cork duo Sparkle, plus loads of entertainment.

Events kick off on July 5th for Limerick Pride’s Official Launch at McGettigans Pub at Limerick City Hotel at 6pm with free finger food, and performances followed by music. Other events include Mr and Ms Gay Limerick, a Tattoo Pride Pop Up, Pride Table Quiz and Print with Pride, a free event where you can make your own Limerick Pride Silk Screen artworks.

There’s a make-up tutorial with Jake Meehan, an international make-up artist, Queens on the Cobbles at Cobblestones Joes, a free entry open mic event that was a great success last year and the Limerick Pride Youth Party.

“T’was the night before Pride” is a free-entry traditional pre-pride party with guest DJs and camp classics at Mickey Martins from 9pm on Friday, July 12th. The night after, for the first time in Limerick, sees a Rupaul’s Drag Race queen, Jujubee headlining the Pride Climax Party, from 8.30pm at Dolan’s Warehouse.

This year Cork’s Gay project launched two policy papers on how to make Cork the best place to be LGBTQ+, which augurs well for it being one of the best places to enjoy Pride season. Cork Pride kicks off on Saturday July 27th and goes on until the following Sunday, August 4th.

The theme for this year’s festival is “Stonewall: 50 Years Proud” and there’ll be a Pride Village in Bishop Lucy Park with a Family Fun Day, club nights and movie events. The parade takes place on Saturday, August 3rd, followed by a parade after-party and, the following night, a closing party.

Belfast Pride 2019 runs for 10 days from Friday, July 26th to Sunday, August 4th with Pride Parade Day on Saturday, August 3rd, which organisers are hoping it will top last year’s. It was Belfast’s biggest yet, with 55,000 people coming out to make some noise and celebrate the city’s LGBTQ+ citizens.

Some 100 events are scheduled to take place this year with the parade kicking off at 1pm. In a part of the world known for its parades, it’s nice to see that the Belfast Pride parade is in fact the biggest cross-community parade in the city, and indeed the single biggest parade that takes place there each year.

Not all events are yet finalised but there will be a comedy show on Friday with Martin Beanz Ward, with the after-party taking place in Galway’s iconic Roisin Dubh. In fact, there’s a fundraising variety show taking place in the same venue on June 27th if you want to help out. The main parade, which takes place on Saturday 17th, leaves from City Hall and ends in Father Griffin Park where there will be a family fun day afterwards.

It’s a particularly proud moment for Carlow as this year the town sees its inaugural Pride parade. It takes place on Sunday, July 21st and starts at 1.30pm, with organisers asking the world and her wife to gather on the grounds of Carlow College for an official town photograph.

After that there’ll be a very colourful procession through the main streets, ending up in Carlow Town Park for a Rainbow Family Picnic with live music, entertainment, dance troupes, food, refreshments and children’s entertainment. In the evening there’s an after-party with drag queen DJs and drag shows from 7pm in Dicey Riley’s. “We are going to paint the town rainbow,” says organiser John Paul Payne.

Keeping Pride on the agenda all year long

What’s next for LGBTI+ Ireland?

LGBTI+ education key to driving change in workplaces and schools

Your guide to Pride 2019: the events taking place across the country

EY kicks off its Pride celebrations with a photo exhibition

Pride will be celebrated in many major cities this year

‘We are committed to encouraging everyone to realise their full potential’

‘Today, Ireland is a global leader in equality’