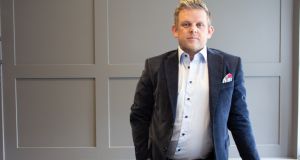 John Crowe of Voucher Connect: sales have grown 165 per cent since the outbreak of Covid-19.

When all this is over, remember to reward the food businesses that stepped up to the plate and delivered the plates to frontline workers throughout the pandemic. Organised via the Feed the Heroes GoFundMe campaign, they include restaurants and corporate caterers alike, many of which were facing an existential crisis of their own.

The initiative was set up by social entrepreneur Cian O’Flaherty, who started out hoping to raise €250 for a platter of sandwiches but by early April had topped €500,000 – and growing. Along the way, it has provided meals for nurses, doctors, fire fighters, gardaí, contact tracers, ambulance drivers and many more all across the country.

It’s a catering roll call of honour that includes Naomi’s Kitchen, which caters for corporate events of all sizes, from business meetings to festivals. Everything is homemade, using only natural and free-range ingredients, and it supports local producers, growers and suppliers wherever possible.

Others deserving of a shout out for their selfless contribution included Nandos Ireland, Bombay Pantry, East Road Cafe and F&B Catering in Killenard, Co Laois. Artizan Food, Ballsbridge Pizza Company and Camile Thai, which cooked up a storm in Dublin, while The Jam Pot in Sligo, Batch Coffee House and Bar in Donegal and Mr Waffle in Galway also helped an army of healthcare workers march on their collective stomach.

Coke Lane Pizza, Kerala Kitchen and Dollard & Co all served up sustenance while some heroic hospitality outlets, such as The Vintage Kitchen and Joburger, prepared their last meals for the cause even as the pandemic forced them to close their doors.

We salute them all and hope they open their doors really soon. And, of course, if we’re raising a toast to them, and the many more who helped Feed the Heroes create the solitary good news story in the early days of the Covid-19 outbreak, it has to be with a Jameson. Its maker, Irish Distillers, rolled up its sleeves to distil hand sanitiser. Slainte indeed.

It’s been a torrid time for restaurants but Voucher Connect, a voucher sales and management platform, reckons it can put support on the menu too. The technology company was set up in 2016 and is the brainchild of John Crowe, who has a family background in hotels. Today, it enables all sorts of service businesses, from restaurants to hair salons, to drive revenues through the sale of gift vouchers.

Since the outbreak of Covid-19, Voucher Connect has seen sales grow like a soufflé, up 165 per cent, as customers row in behind their favourite shops, spas and restaurants in what can only be described as a show of solid solidarity. For its part, the company has waived all fees for Irish businesses. Some of its clients have been topping up the value of a voucher by up to 20 per cent, or providing a percentage of voucher sales directly to staff, according to the company’s PR.

If you’re still taking the train, along with a good reason, you best bring your sarnies. In case you missed it, Iarnród Éireann catering providers have suspended operations as a result of the pandemic. Both Intercity and Enterprise services will be without catering services until further notice. Maybe pack a flask too.

Finally, if you’re looking for a nice way to feed the troops in a way that might strike a chord with socially isolating staff members across the city – or want to reward those staff members who bravely worked through – how about a gift box starter pack from Grow It Yourself? It has an array of kits, starting from just a tenner, some of which are dinky enough for urban apartments. Nothing says hope like a seedling.