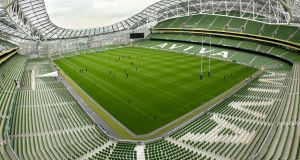 Two Irish teams will do battle for the 2023 Rugby World Cup: the starting XV on the pitch; off it, an organising group hoping to land hosting rights. At stake for Ireland: a potential economic windfall of €1.5 billion from what’s become one of the largest single sports events in the world. The winning host will be revealed on November 15th. A nation holds its breath.

A nation may also be holding its purse-strings. Lately, global sports tournaments have become shorthand for inflated infrastructure spending, eye-watering cost overruns and white elephant stadiums. Having hosted the World Cup and the Olympics two years apart, Brazil became a byword for this trend. A study by Dr Martin Muller of the University of Birmingham found sports-related expenditure for the Sochi 2014 Winter Games was $16 billion – more than twice the official figure of $7 billion.

Hosting the RWC carries lower risk for Ireland because it involves far less capital investment compared to other tournaments. “Realistically, it is the only mega-sporting event Ireland could host,” says Dr Robert Butler of University College Cork’s economics department and a commentator on sports economics. “The expenditure required by states in recent times to host the Fifa World Cup or Olympic Games would make it almost impossible for Ireland to finance either, as it would probably equate to between 25 per cent and 35 per cent of annual expenditure. The current figure of €320 million for the Rugby World Cup that has been underwritten by the Irish Government is less than 1 per cent of annual spending,” he says.

Ireland’s long-list of potential stadiums for RWC2023 are all pre-existing and regularly used, including Croke Park, the Aviva Stadium, Thomond Park, and Páirc Uí Caoimh. This should help to avoid the fate of the €350 million Estadio Mane Garrincha in Brasilia. Built for the 2014 World Cup, it’s now possibly the world’s most expensive bus depot.

While the Government guarantee of €320 million might seem like small change in the context of Olympic-scale spending, many people may still be nervous at committing taxpayers’ money to a sporting project.

Deloitte is the IRFU’s lead adviser for the bid, and the firm’s lead partner Michael Flynn says the best-case scenario would involve not calling on the guarantees. In practice, the financial guarantee is divided into £120 million (about €136 million), payable to World Rugby for hosting the tournament. The remainder of the €320 million is a guarantee against ticket sales.

“To make this commercially successful and avoid having to call on the guarantee, you need to make money on tickets, and where you make money is generally in the knockout games. We are also planning to make a good portion of tickets available for families and discounts for children, particularly in group games, to make sure it’s accessible for all and it’s not overpriced,” he says.

Deloitte forecasts €800 million of a direct economic benefit to Ireland from 445,000 expected visitors during the tournament. As Ireland’s largest indigenous industry, tourism will be the biggest beneficiary. The balance of the anticipated €1.5 billion return will come from spending within Ireland. That figure doesn’t include sponsorship agreements or corporate activity. Flynn describes the projections as a mid case. “It’s low if you look at what England 2015 looked at, and what actually happened. But it’s one that we’re comfortable with; €800 million is a deliverable number. The relative tax based on that would well exceed £120 million, so that six weeks, in terms of the tournament fee, pays for itself,” he says.

In separate media interviews, the Irish bid team claimed its financial offer would be the largest delivered to World Rugby, the sport’s governing body. England’s 2015 World Cup is said to have generated a €170 million surplus, including the tournament fee of €90.1 million.

Some academic studies question whether it’s possible to forecast the commercial benefits of hosting a major sporting event ahead of time. “It is difficult to measure economic activity because there are so many moving parts,” says Dr Butler. Economic concepts such as substitution effects, crowding out, and multipliers often only become clear after an event. “If an Irish person attends a match, they are substituting their income from one good to another. This doesn’t necessarily grow the pie – it is merely a choice as to how to spend one’s income. Obviously, there will be an impact at a local level but not at a national one. International visitors will impact nationally as their spending is additional to what may have been here, and the event will crowd out those that can’t travel due to supply-side issues such as hotel space, and those that choose not to come as the event is being held,” he adds.

When the Ryder Cup came to The K Club in 2006, it attracted more than 260,000 spectators for an event lasting just three days. It generated €143 million for the local economy – €13 million higher than pre-tournament expectations. On average, organisers and spectators spent €350 per day while at the event. Average spending by corporate guests was €500 per day. With similarly well-heeled visitors likely in 2023, business and tourism groups have lined out shoulder to shoulder behind the Irish bid.

“Previous RWCs have proven successful on a number of fronts and economically it should be a great boost for Ireland, putting us in the global FDI and tourism shop window,” says Irish Tourism Industry Confederation chief executive Eoghan O’Mara Walsh.

As anyone who has travelled to major sporting events on foreign shores can confirm, there’s a palpable buzz around a town centre in the build-up to a big match. Fans draped in their team’s colours throng pubs and restaurants near the venue. Ireland is counting on that intangible feeling translating to hard cash for the host city. “Twenty three cent of every €1 a tourist spends goes back to the exchequer in direct tourism-related taxes, so, to that end, anything that boosts visitor numbers to Ireland is of great economic benefit to the country. Last year, €1.91 billion was returned to the exchequer in tourism taxes, so as a sector it is unequivocally positive for jobs, the economy and regionality,” says O’Mara Walsh.

With 42 airlines serving more than 185 destinations, Dublin airport will play a key role in bringing visitors to the tournament should Ireland secure it. Managing director Vincent Harrison anticipates the event will attract fans from a country’s diaspora as well as the home nation. “We would expect that flights on the London-Dublin route, which is the second busiest in the world, will be busy with supporters from a whole host of countries,” he says.

Harrison believes an Irish Rugby World Cup would also deliver benefits for years afterwards. “If you have a great time on a sports trip, you’re likely to return to that location in the future and we’re certain that Ireland will provide visitors with a first-class experience.”

Because the tournament will take place outside tourism’s traditional high season – in September and October – O’Mara Walsh says Ireland’s infrastructure will cope easily. “An additional 5,000 hotel bedrooms will be in place in Dublin and a significant number of hotels will have opened in Belfast,” he adds.

Winning the right to host the tournament could also spur further investment in Ireland beyond what’s already planned, says O’Mara Walsh. “Approximately 40 hotels are due to be built in Dublin by 2021 and having the Rugby World Cup coming just a couple of years later should give further incentive to more private-sector investment in tourism.”

Bid organisers negotiated a commitment to secure hotel prices across the Republic and Northern Ireland. “This was achieved working closely with the bid team and our colleagues in the Northern Ireland Hotels Federation, ” confirms Irish Hotels Federation chief Tim Fenn. “As a sector, we are fully behind Ireland’s bid to host the 2023 Rugby World Cup and we are committed to ensuring it is a tremendous success if we win . . . we believe it has the potential to reposition Ireland as a world venue for tourism,” he says.

Dr Butler says the tournament should be seen as consumption, not an investment. “The benefits should be considered, not just in financial terms, but also include the impact it will have on society on the island of Ireland. If both implicit and explicit benefits are measured, the combination of these will likely exceed the financial costs imposed on the State. The biggest benefit will be social: the event will bestow pride and happiness on many people living on this island and will be a great advertisement for Irish sport, particularly rugby.”