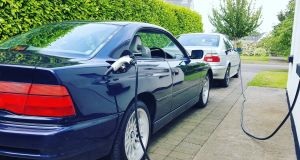 The idea is a relatively simple one: why not rent a charger from someone who has one at their home?

While sales of electric vehicles are actually up in Ireland this year, providing one of the very few bright spots in an otherwise relentlessly gloomy car market, they are perhaps not as high as they ought to be. Certainly, they’re nowhere near as high as they need to be if we’re to have any hope of meeting the target of one million electric cars on the road by the end of this decade.

That’s in spite of a glut of new EV models arriving onto the market, including some at price points much lower than has been the case for electric cars in the past. So why are we not buying?

“My dad was planning on buying an electric car,” Sarah Rust, of start-up company EVE, tells Business Ireland. “Just from looking at what was available then, it was terrible. You would lose so much of your freedom of movement, and your time in planning and trying to figure out where you could charge. My dad ultimately decided that while he wants to buy an electric car, he’s going to wait until the infrastructure catches up. And I thought, if he thinks like that there must be other people that are thinking like that. So, we started talking to friends, family, people that I knew, and it quickly turned out that this was the main reason why people didn’t buy electric cars.”

German-born Rust, together with business partner Oana Rosca, who originally comes from Romania, have set up EVE to try to help electric car buyers tackle the issue of slack charging infrastructure. The idea is a relatively simple one: why not rent a charger from someone who has one at their home? Effectively, the idea is rather like Airbnb for car chargers. While you’re out at work, during the day, your car charger is presumably not in use, so in theory, through the EVE app, you could rent it out to some poor soul in search of a charge. Life is therefore made easier for electric car owners, and potentially more profitable for those with chargers to spare.

“Our assumption was that charging infrastructure is the biggest problem that prevents people from switching,” Rosca explains. “Back in February over 400 EV drivers in Ireland and Germany confirmed that this is a problem. People don’t necessarily have a problem of finding the location of a charger, but they are worried that it isn’t going to be available when they get there. So, we’re creating a platform where you can find a charger, reserve it, and also find public chargers when you need to.”

There are other angles to the EVE idea too, including potentially drumming up business from EV owners for hotels and restaurants with charging facilities. By tempting electric car drivers in with the promise of a charge-up, hopefully a few extra coffees and sandwiches can be sold, too.

Of course, security plays a big role in all of this as well. Rust and Rosca explain that the locations of the chargers will not be disclosed until a definite booking has been made (rather similar to the way Airbnb works) and that reviews can be given for both renter and rentee, so that the process will be, up to a point, self-policing. On the reverse side, renting out a charger in a residential area might be more appealing for some drivers than using public charging points, some of which are located at the dingier end of retail parks.

Can you make money from it yourself? If depends how much you charge for your charger, but EVE reckons that, at a nominal level, and renting out your charger for an hour a day, you could rake in around €500 per year. “We’re not going to establish a pricing policy at all,” says Rosca. “We may give them some tips based on the data that we have, such as the average price for a home charger in your area. We’ll give them tips like that but ultimately it’s up to them, if they want to charge and how much they want to charge.”

EVE has just been added to the Alchemist Silicon Valley-based accelerator, which comes with some financial supports, and some Dragons’ Den-style mentoring. The app, which is currently only in its basic form, will begin beta-testing in Ireland and Germany this October, with an expected full roll-out in January. EVE has been working with the ESB here to include its public charger locations. The next generation of the app will include their availability, and EVE hopes also, eventually, to include payment services for public charging so that you’ll be able to pay through your phone, rather than worrying about remembering yet another RFID card.

It may even encourage people who don’t actually have an electric car to start fitting chargers to their house. “We’ve got some feedback from people that were saying they don’t have an electric car yet, but in the meantime, they are interested in installing a home charger and leveraging their parking spot. Perhaps they live in a nice area and they will be in a prime location for something like that,” says Rosca.

The most affordable electric cars

If you fancy going electric for your next car, but are worried about the potential costs, the good news is that those costs are coming down all the time. All fully electric cars currently come with a €5,000 grant from the Sustainable Energy Authority of Ireland (SEAI) and a further €5,000 reduction in their Vehicle Registration Tax (VRT), and those discounts are usually included in the display price.

In terms of brand new cars, the cheapest electric vehicle (EV) currently on sale is the Renault Zoe, which has a (grants inclusive) starting price of €26,720. That has a one-charge range of 395km, so should be long-legged enough for most people. Puegeot’s e-208 and Opel’s new Corsa-e, which share a common chassis, battery and electric motor, are only slightly more expensive at €27,334 and €27,338 respectively, and both have a one-charge range of about 330-340km. For those fancying something a little more sporty, there’s the new Mini Cooper S E, which costs from €27,764, but only has a range of 225km.

Also very good value right now is the Nissan Leaf. This is a significantly larger car than the Renault, Peugeot or Opel yet costs from as little as €27,595 for the most basic XE model. That said, it’s also packing less range – just 275km on a full charge, but the trade-off between range and spaciousness may well be worth making for some owners.

There are also some new compact SUV electric models coming onto the market, including Peugeot’s e-2008, which starts at €31,845, while the potentially game-changing Volkswagen ID.3 – a roughly Golf-sized hatchback with a range of 420km from a 58kWh battery, will go on sale very shortly at a starting price of €33,625.

Then again, you will be making savings. Even with the ESB now taking payment for its public charging network, the minimum you stand to save, compared to a conventional diesel-engined competitor, is at least €1,000 each year, and that’s without even taking into account the discount electric car drivers receive on toll roads. Electric cars generally have lower maintenance costs, too.

Of course, if you want to go really cheap, there’s always the second-hand market. The market for used EVs is still pretty small, but we have found cars as cheap as €4,300 for a 2011 first-generation Nissan Leaf. Now, the battery in a car of that age is likely to be on its last legs, so range will be limited to say the least, but for those looking to get an affordable foot on the electric car ladder, it might be worth checking out.