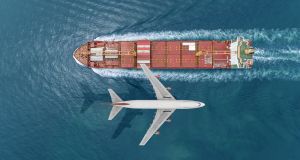 Companies struggling with these nitty-gritty of customs can avail of training courses. Photograph: Getty

Who’d be an exporter or importer in the post-Brexit world? The trade deal between the EU and the UK may mean tariff-free movement of goods between the parties but the UK has still left the customs union, the single market and the VAT area. And that means masses of paperwork before you can get goods on to a ship.

If that wasn’t enough alphabet soup for you, there’s even more when you delve into the highly complex world of international trade and customs. Against that backdrop it’s been little short of miraculous that we haven’t seen more disruption at our ports.

“That’s quite staggering,” says Enterprise Ireland regional director Giles O’Neill. “Revenue is projecting that declarations will rise to 20 million this year. In some ways, the January figure should be celebrated. According to Dublin Port, 75 per cent of traffic flowed through the port without difficulty. There were some technical issues with the systems early on, but these were quickly picked up and ironed out.”

That still leaves the 25 per cent that didn’t flow quite so freely. In some cases, these would have been subject to sanitary and phytosanitary (SPS) checks on goods of animal or plant origin, but in others the delay was simply down to problems with customs declarations.

“The tariffs may have been removed by the trade deal, but it didn’t take away the checks or the paperwork,” says KPMG tax partner Glenn Reynolds. “The rules are there, and Revenue has done a great job of education about them, but it has to apply customs law. The concept of seamless and frictionless trade with the UK is gone. There were always going to be teething problems. It takes time for businesses to become accustomed to new rules.”

Those rules have far reaching implications. “If an Irish company wants to send a laptop to a UK-based employee, it has to do a customs declaration,” says Reynolds.

At least an element of those teething problems is due to a lack of preparedness on the part of some Irish businesses. “Unfortunately, some companies were not prepared,” says Mick Curran, chief executive of the Chartered Institute of Logistics and Transport. “In one way, you can’t blame people. Up until December there was a cohort who thought it would be sorted by a deal and declarations wouldn’t be required. In fairness, businesses were coping with Covid as well and this might have been a bridge too far for them. Larger companies knew that wasn’t the case and they started planning back in 2017. The only deal that would have resulted in no declarations was a complete U-turn by the UK on leaving the EU.”

That problem is exacerbated by an even greater lack of preparedness on the other side of the Irish Sea. “The UK government was determined to give the country a hopeful message throughout the process,” says Curran. “In October 2017, Boris Johnson said it was not beyond the wit of man to solve the Irish Border question. The mood music in Britain was consistently one of ‘Keep calm, nothing much is happening’. The Irish government always presented a very honest assessment of what would happen.”

And those companies that did understand the ramifications of the changed relationship faced difficulties in accessing customs expertise. “A lot of customs clearance agents simply shut up shop in 1992 when the single market came into effect, and the capacity and experience in no longer there to meet the increased demand,” says BDO partner Carol Lynch, who is also a director of customs agent Declaron.

Mazars VAT director Alan McManus agrees. “It was never going to be seamless. There are lots of complexities involved. Some member states are demanding hard copies of everything. Ireland is accepting digital documentation but that still runs to several pages and the information has to be accurate. Any error can result in long delays or the shipment being turned back. This takes time for businesses to get used to and requires the engagement of competent advisers. But many customs agents’ books are full, and it has been a challenge to find an experienced agent.”

Declaron was established by BDO as a joint venture with Fexco to help businesses deal with that challenge. The highly automated customs clearance solution allows companies to make their own customs declarations with the comfort of having a back-up team of experienced customs agents available at all times to assist them with any issues that may arise during the process.

“There isn’t sufficient experience or expertise in the market,” says Lynch. “We looked at the problem facing companies and went back to the drawing board to design a 21st-century solution to the problem. We have scalability built in at the heart of the system, which is a cloud-based, machine-assisted, user-friendly and user-centric piece of software. This means there are no issues with capacity with Declaron.”

Just getting goods out of Ireland may not be enough, warns Reynolds. “There is an additional complexity for Irish businesses selling to UK customers on a DDP [delivered duty paid] basis,” he points out. “You can’t file a declaration in the UK unless you are established in the UK. You need an agent to do it for you if this is not the case. But customs agents have joint and several liability when they do that, and will charge more for the service or won’t take you on at all. We are now seeing a lot of UK companies saying DDP or nothing, so that is another thing to contend with.”

Companies struggling with these nitty-gritty of customs can avail of training courses being provided by the Chartered Institute of Logistics and Transport, according to Curran. “There are still places available on our Clear Customs Course, which we run in conjunction with Skillnet Ireland,” he says. “The course trains people to do it for themselves.”

And there are grants available from Enterprise Ireland to assist companies to take on additional staff where necessary. “The Ready for Customs Grant has been extended to March 31st,” says O’Neill. “Any freight forwarder, logistics company or customs clearance agent experiencing capacity issues and who needs to take more people on can apply again to get further support. SMEs really should use an agent where possible. They are in the best position to help, and have the expertise needed for companies to make customs declarations.”

Step-by-step guide to taking the complexity out of customs

Customs clearance made easy with Declaron

Brexit: The disappearance of Percy Pig is a feature, not a bug

Brexit support: Where can companies go for help?

VRAI: Irish simulation company dealing with the reality of Brexit

Brexit: Irish consumers will have to pay extra for some goods or go without

Brexit has made InterTrade Ireland even more important