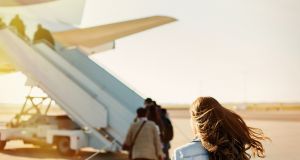 The aviation industry will double to carry over 8.2 billion passengers a year, driving a demand for between 37,000 and 43,000 new aircraft.

The robustness of the aviation sector is attracting new investment into the space from the capital markets with aircraft leasing more recognised globally for generating strong and stable returns, he says.

“The last few years have seen substantial investor interest in the leasing sector right across the capital stack. To fund the future expected growth in air travel, a whopping average of $170 billion of finance is needed each year to acquire new aircraft. The capital markets will fund a significant proportion of that,” says Greene.

Boeing projects that bank debt and capital market products will remain the largest funding sources for lessors in 2019 (34 per cent and 30 per cent respectively) with continued demand from institutional investors supporting the use of capital markets products, including unsecured debt and asset-backed securitisations. This appetite from the capital markets for investment in aviation is showing a significant increase, even compared to just five years ago.

“The appetite in the capital markets for investment in aviation has seen many established lessors also set up new side-car funds. This is specifically to marry their operational strength with third-party capital as well as to source deals through the footprint of the asset managers. This has led to a rapid expansion in the number of asset-backed securitisations, joint ventures and other sidecar structures established with aircraft lessors,” says Greene.

Furthermore, leasing companies are tapping into the secured and unsecured bond market to regularly raise operating capital. Lessors’ improved credit ratings has enhanced access to unsecured borrowings – via both the capital markets and commercial bank market – in recent years and there has been a major shift in favour of unsecured debt.

“According to Boeing 67 per cent of debt raised by lessors in 2018 was unsecured. For an aircraft leasing company borrowing unsecured has many attractions, being more flexible and having lower transaction costs than borrowing on a secured basis, though usually at the cost of higher coupons or +margins. The ratings agencies cite low levels of secured debt as being a key consideration in granting investment-grade ratings to lessors.”

Lessors are certainly taking advantage of the robust capital markets for funding aircraft as more companies seek to access unsecured funds to provide easier aircraft transitions. Interestingly, more mid-life lessors have tapped the secured markets, most notably the ABS market – both as a refinancing tool and to facilitate sales.

“Ultimately, lease yield, debt cost, asset selection, asset utilisation and remarketing capabilities have always been critical components of the aircraft leasing business and that will remain the case going forward,” he says.

“Through our work with companies in the wider aviation industry it is clear that Brexit is a major concern for all lessors, airlines, manufacturers and Maintenance and Repair Operations [MROs],” says Carol Lynch, partner at BDO. “Aircraft manufacturers and MROs purchasing parts from the UK will now need to lodge customs declarations. This will likely require the use of Customs Duty Suspension Procedures, where parts are being imported from the UK for ultimate re-export out of the EU (either back to the UK or to another non-EU country). While there are reliefs available, claiming them will add an additional layer of bureaucracy as well as leaving the potential risk of duties if not imported correctly ,” she says .

A prevailing theme over the last five years has been this deepening of the investor base in the sector. “It is a real endorsement of the returns the sector generates. The capital markets, in particular, have shown a very strong interest which has driven down costs of finance for lessors,” says Tom Woods, head of aviation finance and leasing at KPMG Ireland.

“According to Boeing, approximately 28 per cent of financing for new deliveries in 2018, totalling $30 billion, was financed in the capital markets. Aviation asset-backed securitisations have also blossomed since the markets restarted around 2014. In 2018, 14 separate deals totalling $7.6 billion were closed compared to 12 deals totalling $6.6 billion in 2017.”

KPMG interviewed more than 40 industry leaders for its Aviation Industry Leaders Report 2019: Tackling Headwinds, which it produced with Airline Economics last week. “The general view is that the capital markets will remain strong through 2019 although rising interest rates and various other geopolitical, macroeconomic and industry headwinds could create more volatility in the market,” says Woods.

Growth in passenger demand has historically tracked about 2 percentage points above GDP. “There was a decoupling of the two metrics a few years ago, largely to do with the stimulation of additional demand by low-cost carriers. Growth in passenger demand is expected to close at approximately 6.8 per cent for 2018, which is well above the 10 year average growth of 5.5 per cent and well above GDP,” says Woods.

The market and growth potential remains enormous over the long term

Growth, however, has been slowly coming down off a peak of 8.6. “The geopolitical and macroeconomic headwinds are no doubt impacting growth. We asked this question in our 2019 Aviation Industry Leaders Report: Tackling Headwinds and the general view is that these headwinds will create a more challenging market in the next few years. Airbus and Boeing forecast average growth of between 4.4 per cent and 4.7 per cent over the next 20 years. Even at these levels, the industry will double to carry more than 8.2 billion passengers a year, driving a demand for between 37,000 and 43,000 new aircraft, valued between $5.8 trillion and $6.3 trillion. The market and growth potential remains enormous over the long term.”

The near-term market outlook for trading aircraft is expected to level off with a moderation of the aircraft value inflation that we have seen over the past few years, as the number of lessors and investors chasing assets and seeking to build portfolios has grown, says Rob Murphy, aviation group co-chair at law firm Arthur Cox.

“Most commentators see some market correction on that side; indeed they consider that it has been coming for some time. Industry trend elements are also relevant, notably the significant downward pressure on lease-rate factors that we have seen for a number of years now, an expected uptick in airline financing stress and failures. We are already seeing evidence of that, over-reliance by some airlines on the liquidity generated by the sale and leaseback market and the large original equipment manufacturers’ order books out well beyond a five-year horizon. The financial performance of the industry is also heavily affected by macro factors – global economic growth, regional variations, political instability, trade wars and the like. Overall, the short to medium and even long-term outlook feels challenging for all key players – airlines, lessors/investors, OEMs especially,” says Murphy.

“The OECD BEPS report is almost universally accepted, and will be implemented internationally in different ways. Between the US tax changes, and the EU anti-tax avoidance directives, they will drive a review of leasing platforms, and this may lead to some restructuring,” she says.

While the details of these tax changes are not yet known, Ireland is expected to remain a premier location for aviation activities. “Regulation is also likely to grow in significance. Managing anti-money laundering requirements, compliance with sanctions and more recently the requirement of an Irish Central Bank registration requirement for finance lessors in late 2018 demonstrates the trend of growing supervision and compliance in the industry,” says Devlin.