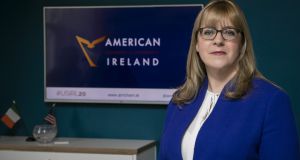 This year’s Thanksgiving comes on the cusp of the 60th anniversary of the founding of the American Chamber of Commerce in Ireland. It has been a particularly challenging year for our country and there is no better time than Thanksgiving to reflect on the challenges, achievements and lessons of the past year.

As the Tánaiste said recently, foreign direct investment is firmly part of the backbone of our economy. Global companies operating here span diverse sectors from life sciences, to finance to tech. The response to the pandemic has proven to corporate boardrooms across the US once again, that their talented teams here can be relied on to play their part in the diversified global supply chains to deliver essential products and services.

Strong confidence in the relationship is borne out by a recent survey of our members’ leadership. Fifty-five per cent told us they thought Ireland was a better place to invest than in 2015 and 41 per cent of leaders told us that their companies made investments in the last 12 months. Examples include Pfizer, who this month announced a €300 million capital investment with 300 jobs in its Irish operations. In July, Amazon/AWS announced another 1,000 permanent jobs in Ireland over the next two years.

In total, more than 260,000 families in Ireland now have somebody working directly or indirectly for the multinational sector here. For every 10 jobs created by a foreign-owned company in Ireland, a further eight are created in the wider economy and the most recent data available (from 2018) shows that the Irish operations of US companies spent almost €10 billion on payroll, more than €6.3 billion on goods and services, and more than €5.3 billion on capital expenditure. The sector has truly played a key role keeping all boats afloat during the crisis.

The relationship continues to be two-way. Ireland is now the ninth biggest investor into the US with Irish firms employing more than 106,000 people across the US. Trade and investment continue to grow, expertly supported by our world leading state agencies such as IDA Ireland and Enterprise Ireland.

On the international stage, Ireland’s profile will doubtlessly be enhanced by president-elect Biden’s strong Irish roots – Ireland’s engagements in Washington next March will be hotly anticipated events. But this has also been an historic year for inclusion. The US has chosen its first female and person of colour to be vice-president-elect, sending a strong signal around the world. AmCham Ireland demonstrates our commitment to equality by having a gender balanced board and we have extended gender balance requirements to our advocacy work.

Optimism for the future must be tempered with caution against complacency. Though being Irish can often open a door in the US, Ireland will continue to win or lose based on the strength of hard metrics of locating here versus competitor markets. Our economic future relies on the strength of our reputation abroad as a vibrant place to do business, and our inclusive and talented workforce.

Part of that reputation is a productive relationship between multinationals and the domestic economy. This year, as president of the American Chamber, I have put a strong focus on highlighting the linkages between the multinational sector and the SME sector. We have encouraged all members to support their local businesses. We have argued that businesses – regardless of size – must be enabled to participate in the digitalised global economy and multinationals have offered significant expertise in closing the productivity gap that exists between these two critical parts of our economy.

Our success is also dependent on our ability to attract and retain talented individuals to collaborate, create and innovate together here. As well as protecting Dublin’s status as a globally competitive capital, we believe there is an opportunity to rebalance Ireland’s economic development towards its regional locations and offer talented individuals more choice in where they locate. Covid-19 has shifted working dynamics and post-pandemic, we must embrace the benefits of more flexible models – where an employee can have more choice over where they spend their working week, while preserving the in-person collaboration that is fundamental to company culture.

Enabling this means getting both digital and physical connectivity right. Ireland must accelerate the National Broadband Plan, prioritising the blackspots that are blocking progress in parts of the country. Equally, we cannot continue to be hampered by poor physical infrastructure that is slowing down progress such as inadequate road and rail infrastructure.

Six decades on from the American Chamber’s founding, Ireland – once a periphery country economically – now sits at the centre of the globalised world around us. Maintaining our global reputation and competitive advantage is essential for our future prosperity.  And just as the Government and community moved through the pandemic – responding with agility – adjusting to difficult situations, let’s think big and strategically about the future with the same focus and urgency. Let’s be thankful for each other – public and private sectors – especially our front-line heroes, and all we have achieved together. 2020 has been a year where we’ve learned that our strong sense of community is our greatest strength of all.

How the pandemic has changed regional outlook to greater balance

State’s growing reputation as a reliable and trustworthy partner

Learnings from the mass migration to remote working

US business leaders in Ireland give thanks to the workers