The space for civil society is shrinking as states use the threat of terrorism and the need for security to restrict the journalism that in fact makes them free. 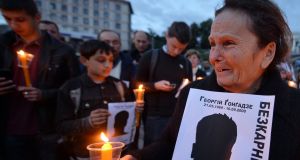 The mother of a killed Ukrainian journalist (unidentified) holds a candle and a sign reading ‘’Impunity kills’ during a memorial rally to mark the 13th anniversary of Ukrainian journalist Georgy Gongadze’s murder at the Independence square in Kiev on September 16, 2013

It’s a dangerous time for journalists, according to Dunja Mijatovic, the outgoing representative on freedom of the media at the Organisation for Security and Co-operation in Europe. Some 110 journaists were killed and 221 jailed worldwide in 2015.

Compared to when she took up the office in 2010, she says we have seen the greatest threats to free expression and media in the 57 OSCE participating states. The space for civil society is shrinking, as states use the threat of terrorism and the need for security to restrict the journalism that in fact makes them free.

The OSCE is a pan-European organisation dealing with comprehensive and sustainable security in the region, including its politico-military, economic and environmental, and human aspects. Participation by the US, Canada and Mongolia gives it a wider geographical spread. The recent revival of geopolitics in Ukraine and the Middle East underlines its role as an inclusive diplomatic forum.

Based in Vienna, it employs 2,700 people and has an annual budget of €141 million. It meets annually at ministerial level and otherwise in a permanent council of ambassadors. Major fields of activity include arms control and confidence building, election monitoring, protection of national and other minorities and monitoring freedom of expression and the media.

Ireland plays a prominent role, having chaired the body in 2012. The current chair is Germany, which wants to give the OSCE a higher profile, amid renewed East-West tensions. The OSCE originated during the Cold War in 1975 and its evolution reflects the ebb and flow of those tensions.

In her activist, vocal and courageous pursuit of the role, Mijatovic, a distinguished media regulator and academic from Bosnia-Herzegovina, draws on classical radical liberal understandings of media ethics. These affirm the centrality of media as vehicles of socio-political communication, public deliberation and access to information.

For these roles the values of accurate, truthful and balanced reporting and of commentary capable of distinguishing between facts and opinions are, she argues, socially and legally necessary, however difficult they are to attain in practice.

They help create autonomous public spheres and spaces for civil society independent of states and powerful private interests – even though these are inevitably shaped by both forces. Such norms are particularly important for states in transition from authoritarian to more democratic forms of government, with reducing state censorship and repression of journalists.

Such classical values of media ethics must also be put in the context of changing political and social circumstances in states and in international relations. These are often common and convergent issues in the region. National security imperatives, including against terrorism, constrain freedom of expression and journalistic practice, as Mijatovic trenchantly argues. The role of the media in conflict situations is a key related issue where journalism is more and more dangerous.

Social and online media pose a new challenge, particularly on the law and costs of defamation. A ruling last year on an Estonian case by the European Court of Human Rights, with whose jurisdiction the OSCE is associated, imposes strict obligations on those hosting websites to remove defamatory material as if they were classical publishers with editorial control. This is likely to limit anonymous comment and therefore freedom of expression. Questions of privacy, hate speech and surveillance are also on the OSCE agenda.

Concentration of media ownership is another constraint on media throughout the OSCE area. Pressures to make profits increase simultaneously with round-the-clock online digital journalism with fewer journalists, leading to falling standards and public trust.

The ambiguous role of public service broadcasting is highlighted by the surge of conservative illiberalism in Hungary and Poland. Such trends make it all the more important to assert the universal and continuing relevance of this radical and valuable media agenda in and by the OSCE – and for other world regions too.