It would be a symbolic move, helping to put international pressure on the Israelis and could usefully be debated in the general election campaign. 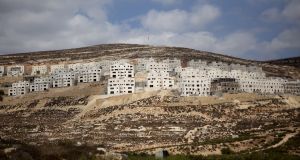 Amid the turbulence currently afflicting the Middle East and north Africa it is all too easy to overlook the continuing conflict between Israel and the Palestinians.

There is little or no prospect of talks on a two-state settlement getting going again soon. Recent violence in which more than 130 people have died warns how a political vacuum could be filled. Can anything be done internationally to avoid that?

Ten years ago many would have said the Israeli-Palestinian conflict was the key to unlocking others in the region, or made it more pivotal than now. Rarely is that case argued these days. The 2011 Arab rebellions were concerned with their own societies and dictators. Leverage by larger regional powers like Turkey, Iran, Egypt and Saudi Arabia was applied more to Iraq and later Syria. Israel’s growing economic and political strength gave it an opportunity to find common interests with some of these powers.

These had their own reasons to fear regional spillover, like the growth of Hamas in Gaza and its links to Muslim Brotherhoods elsewhere. Solidarity with the Palestinians took second or third place in such rankings.

During these years of rule mostly by Likud-dominated coalitions led by Binyamin Netanyahu (now in his fourth term as prime minister) Israeli control of the West Bank has been consolidated by Israeli settlements there and in East Jerusalem. They number half a million people in a Palestinian population of 2.7 million.

The 1.7 million Palestinians in Gaza inhabit one of the world’s most densely populated territories. As is well known the West Bank Palestinians are both divided and controlled by these settlements, which have their own reserved highway, separation wall and have security protection by the Israeli defence forces.

The Palestinian population is ostensibly ruled by the Palestinian Authority, led by 80-year-old Mahmoud Abbas. It is widely discredited by corruption and feuding over who is to succeed him, having been brought into being to oversee delivery of a two-state settlement in the 1990s, which has so conspicuously failed to emerge.

There is growing support among younger Palestinians for a one-state solution providing equal democratic right for the two peoples.

Such disenchantment is driven by Netanyahu’s refusal to engage and the failure of international efforts to put pressure on him to do so, led by the US and the UN endorsed-quartet bringing them together with the EU and Russia.

To counter this the Palestinian Authority’s international campaign for recognition of it as a state entitled to self-government has attracted support from 136 of the UN’s 193 members.

He is frustrated with the quartet and wants to see another support group for a two-state settlement emerge before Islamic State establishes a foothold among Palestinians. But after overseeing the UN climate change talks last month he may not be long more in office. Other EU states like Spain, Belgium and Luxembourg are believed by diplomatic observers to be ready to follow a French example. Ireland too should be in that category, given its long-standing support for Palestinian statehood and the need to bolster the case for a negotiated outcome.

It would be a symbolic move, helping to put international pressure on the Israelis and could usefully be debated in the general election campaign. They are already concerned by EU moves to label goods produced from illegal Israeli settlements in the West Bank. Right-wing initiatives to constrain international non-governmental agencies in Israel are a counter-move.

Supporting Palestinian statehood follows logically from a commitment to a two-state settlement of the conflict.

More radical moves to boycott Israeli goods, divest investments there and apply sanctions until it withdraws from occupying the West Bank have not attracted official international support. But their case that the occupation looks increasingly like South African apartheid overlaps with an eventual one-state outcome in which both peoples would coexist equally.

That would be the end of Zionism and a separate Jewish people with their own state. But the status quo, while it suits Israeli policy under Netanyahu, is unsustainable in the longer term. pegillespie@gmail.com

Postman Pat
British ambassador on the NI protocol
Is the HSE capable of ‘rapid’ change?
Abuse at Belvedere College
The Seanad and university representation
Davys and Central Bank
‘Vaccination passports’ – time for action
Golf courses are safe places for exercise
Sheltered housing and older people
The price of alcohol