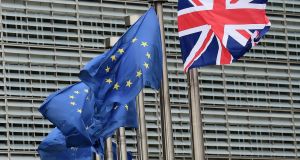 The recent negotiations between the UK and the EU were highly centralised, with little or no specific Scottish, Welsh or Northern Irish input. Photograph: Emmanuel Dunand/Getty Images.

From an Irish perspective, it helps to read the forthcoming British referendum on whether to remain in or leave the European Union through a Scottish lens. Irish-Scottish relations have been transformed for the better in recent years and are set to become much closer as the UK makes this decision and then decides on whether and how it can hold itself together.

The uncanny resemblance between the unionist case for keeping Scotland in the UK to preserve access and influence and the case for the UK staying in the EU for the same reasons is now more frequently recognised. The two issues are organically linked in a dual sovereignty crisis faced by the UK . If the UK votes to leave the EU, Scotland will have to decide whether it wants to follow suit even though it prefers to remain a member.

A recent British Social Attitudes survey indicates that Scots are only 5 per cent less Eurosceptic that the rest of Britain, measured by support for reducing EU powers or leaving; but a higher proportion want to remain than in England. Other polls show a 5-6 per cent swing to independence if the Leave side wins. Support for Scottish independence is diminishing even as the SNP looks set to sweep May’s Scottish Parliament elections. Realists point to the collapse in oil prices from $110 to $30 a barrel since the independence referendum in 2014. A fear factor about the Scottish economy affected votes then and is set to permeate the debate on Brexit at UK level.

Whatever the outcome, Scotland will have to adjust to a British decision increasingly at odds with its own preferences. The sense of Scottish nationhood has strengthened enormously and with it a desire to fashion its own international role alongside the UK’s or independent from it. The tussle between the two sentiments was visible at a recent meeting in Edinburgh organised by a university group determined to put the question in a European and Irish setting as well as a British one.

Should Scotland want to maintain a relationship with Brussels, it might open talks for a deal separate from London’s, short of independence. If that proved legally impossible Scotland could claim successor state status as an EU member if another independence referendum were passed. And if the UK votes to remain an EU member, Scotland could seek its own powers to deal directly with Brussels as well as claiming more power to determine the UK’s negotiating stance. The UK negotiations on the package concluded last week were highly centralised, with little or no specific Scottish, Welsh or Northern Irish input.

The effects of these changes on Northern Ireland are potentially cathartic. Letter writers to this newspaper underline how strange it is to see the Democratic Unionist Party supporting a Brexit vote that could trigger Scottish independence. Where would they then be in a diminished UK minus their historical Scottish inheritance and which is less willing to support a weak periphery? It is not scaremongering but prudent foresight to say this decision could undermine the powersharing arrangement and disrupt cross-Border relations in Ireland with risk and uncertainty.

Structural change in the British state’s external and internal sovereignty can have unanticipated effects on Ireland North and South. It would put Irish unification on the political agenda more rapidly than is expected or desired. More political debate and research on these issues are urgently required.

1 Coronavirus: Ireland plans for massive increase in tests
2 Coronavirus: What we know so far about how Ireland is affected
3 ‘I woke up the next day in a guy’s house covered in bruises’
4 Coronavirus: Italy-Ireland match behind closed doors may be option, says Harris
5 Dublin stabbing: Parking space was at centre of previous rows, gardaí told
Real news has value SUBSCRIBE