Will exodus of firms from Catalonia economically influence voters? 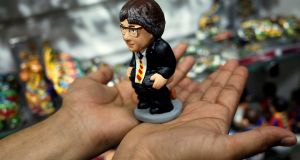 A mud figure of Carles Puigdemont, known as caganer (Catalan for defecator): More than 1,300 firms have moved their headquarters from Catalonia in the three weeks following its illegal referendum for independence. Photograph: Jon Nazca/Reuters

The secessionist process initiated by Catalonia’s regional government has prompted companies to relocate in other Spanish regions to ensure continued free-market access to the rest of Spain and the European Union.

Over 1,300 companies have now moved their headquarters outside Catalonia in the three weeks following Catalonia’s illegal referendum for independence of October 1st. The traditional concern that multinational affiliates are “footloose” applies equally to local companies. The moves resulted from the political uncertainty triggered by secessionist movements, as also happened in the case of Quebec in the 1980s and 1990s.

The Catalan government claims this is nothing to worry about, just mere corporate makeup with no significant effect on the region’s economy. But this argument is very questionable.

The first to leave were the banks. Caixabank and Sabadell, the third- and fifth-largest banks in Spain by assets, respectively, were fast to move their headquarters outside Catalonia, amid fears of a flight of capital associated with the risk of becoming ghost institutions outside the supervision of the European Central Bank in the event of secession.

A cascade of other small and large firms from different industries followed suit. Out of the seven Catalan companies listed in the Ibex 35, the Spanish stock market index, only one now still has its headquarters in the region.

These departures underscore fears that Catalonia would be left outside the EU and the euro zone if it became independent, leading to the restoration of tariffs and other barriers to the free circulation of goods, capital and people. Catalan companies are also citing concerns over borrowing costs, credit ratings, and legal and regulatory issues in the aftermath of a move to independence.

The Catalan government has lost its credibility in managing business affairs. Before the referendum, it said that the region’s firms would not leave. But they have done so massively. The government also claimed (and continue to do so) that Catalonia would never exit the EU following secession. But EU leaders insist that the region would have to reapply for membership in a process that would take years.

Catalonia is among Europe’s most advanced regions and its economy holds great promise, if properly managed. Its capital, Barcelona, has become not only a magnet for tourists but also for international investors, technology companies and talent. With current developments in the secessionist movement, however, Catalonia risks missing the opportunity of becoming a central hub in global production and innovation networks.

To be sure, decisions to move out headquarters do not imply significant job losses for Catalonia in the short term. They do not result in lower tax revenue either, since the Spanish central government currently administers corporate taxes anyway. Yet they may have substantial negative impacts in the medium to long run. The international business literature has shown that the “headquarter effect” has a strong influence over corporate decisions to locate future investments, especially when it comes to high-value-added activities such as strategic planning or innovation centres.

Perhaps more importantly, the exodus of Catalan firms produces a very negative “signalling effect” for prospective international investors. Catalonia is the second-largest recipient of foreign direct investment in Spain, after Madrid, but many such projects have now been frozen. How can foreign firms be persuaded to locate in Catalonia against the stampede of local firms? Naturally, the odds that new investments by multinationals will gravitate instead towards other Spanish regions have increased substantially.

In any case, these kinds of reputational and signalling effect are difficult to quantify and will therefore remain debatable. What’s clear is that their magnitude will depend on the final outcome of the secessionist movement. The longer that the current uncertainty lasts, the more acute the effects on business decisions will be. In the most negative scenario, if the process concludes with an independent Catalonia outside the EU, the effects on the Catalan economy would be devastating. But even if things return to normal fast, this episode will remain in the memory of investors, whose decisions will be influenced by the risk of a future return to political unrest and of an eventual secession. Unfortunately, it will take years for the Catalan economy to fully recover its reputation.

On October 27th, following a declaration of independence by the Catalan parliament, the Spanish central government exercised its powers to cease the Catalan government and call for regional elections, now set to take place on December 21st. The deposed Catalan president, Carles Puigdemont, has said he will accept the result of this election.

Catalan firms have already voted with their feet. Will Catalan citizens follow by voting with their pockets in the forthcoming regional elections?