Opinion: Missing from this debate is real scrutiny of the EU Water Framework Directive 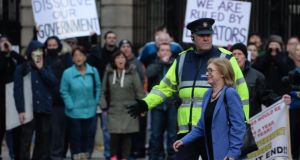 Despite all that has been said about water charges three very important issues have been strangely absent from the debate.

First, the Government claims it must charge for domestic water because it is required to in the EU water framework directive. This is not true.

EU directives are binding. Member states must implement them through national legislation. Article 9 of the water framework directive requires charging for domestic water. There is one exemption. It is known within the European Commission as the “Irish Exemption” because it was won by the Irish and only Ireland qualifies for it. It is found in article 9.4 of the directive.

In 2000, the Irish government brokered this exemption and the inclusion of article 9.4 which formally and legally absolves Ireland and only Ireland from the requirement to charge for domestic water.

This Bertie Ahern government stood up to Brussels and insisted that the Irish people have the water they need uncharged. Among other points it took great pains to explain our water-soaked climate to officials from dryer member states.

As an MEP I brought this to the public attention in 2008 when the last government was introducing water charges for schools. On April 17th of that year minister John Gormley stated in the Dáil that “The only exemption available to Ireland, and availed of, is contained in article 9.4 and relates to dwelling houses using water for ordinary household purposes”.

At that time I was assured by the EU Commission that the “Irish Exemption” was ours to keep. Brussels could not take it away. In fact it could only end if Ireland cancelled it. This exemption belongs to us, the people of Ireland. It protects us from having an essential resource financially controlled by private or public interests.

Water is unquestionably a primary requirement of the common good. The EU water framework directive informs our national water legislation. The directive gives the EU control of all water in Europe. This includes the water that falls from the sky, that flows in rivers, springs and underground, water that fills our wells, lines our coasts and stretches out to sea and presumably the water that makes up 60 per cent of our bodies.

It is this claim to EU ownership of a God-given resource, essential to humans, plants and animals which is so dangerous. It allows government to act as if water is its to control; to lease, to sell, to contract and tax.

Finally, the requirement of the directive to charge for essential use of water in homes, schools, and hospitals is based on the UN “polluter pays principle”. This is a false premise when applied to the essential everyday use of water.

This principle may be applicable for industrial processing and those who abuse water by contaminating and wasting it. But it is absolutely wrong to define in law every use of water as “polluting” and to define anyone who uses water as a “polluter”. We must have water. It is a requirement of life. In fact our use of water is part of nature’s water cycle which replenishes and refreshes water. It is an insult to our human dignity to be deemed a “polluter” because we wash or take a drink of water.

The Government cannot be allowed to cancel the hard won “Irish Exemption”. Since the Government is not acting on our behalf nor is it acting on behalf of the EU, why and for whom is it trying to force us to pay for water?

Kathy Sinnott was an MEP from 2004 to 2009 and member of the European Parliament’s environment, public health and food safety committee

1 Covid-19: Travel restrictions to stay and 'green list' put on hold amid fears of second wave
2 Ruth Negga: ‘People who say they don’t consider skin colour... are you f**king blind?’
3 If you are young and live outside Dublin you could be in trouble
4 If hairdressers ran our schools every child would be going back in September
5 Fintan O’Toole: On this Fourth of July, the American republic is in grave danger
Real news has value SUBSCRIBE