Why le ‘Fair-Play’ will never get us anywhere against France 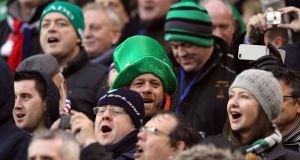 ‘It wasn’t just in their boisterousness that the French supporters showed us up at the weekend. In their company, especially, The F ields of Athenry is exposed as a rather inadequate rallying cry.’ Photograph: Inpho/Colm O’Neill

There was a comic but telling moment during the rugby match on Saturday when, with Ireland leading 13-3, French scrum-half Morgan Parra prepared to take a kick at goal.

On cue, a section of the home supporters, demonstrating the sense of fairness for which they’re world-famous (or think they are) started hushing the rest of the crowd into silence, out of respect for the kicker.

Then, tragically, the hushing was strangled in throats. Not by the boos of other Irish fans, but because, instead of being quiet for their own player, the French supporters chose that very moment to launch a rowdy chorus of La Marseillaise .

Two things were simultaneously illustrated: (a) that silence for kickers is not part of French sporting culture; and (b) that the visiting fans fully expected Parra to put the ball between the posts – what with him being a well-paid professional sportsman and all – regardless or anything they or the Irish fans might do during his preparation.

Sure enough, Parra thumped it over, thereby setting France up for the ill-deserved draw, the snatching of which they would complete nearer full-time.

This is not, by the way, to suggest that I would have favoured booing him. On the contrary, the booing or whistling of opposition kickers is behaviour of which I too disapprove. In fact, I consider it on a par with the Mexican Wave: something that has no place at games, and in which I would never participate myself.

But it seems to me there is a certain class of Irish rugby supporter (upper-middle class, if I had to guess) for whom the ostentatious suppression of impolite noises aimed at the opposition is more of a priority that the creation of noise, polite or otherwise, for the home team.

Alan Quinlan has said all that needs to be said on that last subject, and there was nothing on Saturday to suggest the Lansdowne Roar’s imminent revival. In the meantime, given the home supporters’ general placidity, the insistence on being even quieter than usual for kicks at goal just seems prissy.

Yes I know it’s what they do in Thomond Park, which is to Irish rugby what the Golden Temple of Amritsar is to Sikhism. And I don’t pretend to speak for Munster supporters. I can barely understand most of them, God knows.

But I like to think there is a subversive quality to Thomond Park’s uniquely deep silences, of which the fans are well aware. Expecting at least some distraction, a visiting kicker is instead treated only to the sound of his own heartbeat. At the very least, this causes more kicks to be missed than scored. And the genius is that it’s done under the cover of etiquette.

Anyway, it wasn’t just in their boisterousness that the French supporters showed us up at the weekend. In their company, especially, the Fields of Athenry – which was given several outings, none to great effect – is exposed as a rather inadequate rallying cry.

Comparison with La Marseillaise , which doubles as official anthem and supporters’ chant, is apt, because that too is about fields. But its keynote idea – the wish to irrigate those fields with the blood of invaders – is somehow more suitable as a motivational tool for rugby players. Whereas, even as Athenry rang out for first time on Saturday, with its message of poignant fatalism, you just knew that 13-3 wouldn’t be enough.

I say this as an ardent Francophile. But the truth is we are far too respectful of the French, which must be part of the reason we almost never beat them at rugby. I know there are historic explanations for the affection. Yet for all that they were often our allies against imperialist aggression, the relationship usually delivered less than it promised.

That’s why, at the risk of overstatement, I thought another key moment of Saturday’s game was a reenactment in miniature of Irish 17th- and 18th-century history. Yes, I mean the 76th-minute Flight of the Earls (Keith) towards the French line: recalling the countless thousands of Irishmen who, for generations after the fall of Gaelic Ireland, served in the armies of France.

Here at last was a chance for a small payback on the investment. The polite thing would have been for the visitors to just let him score, or at least not illegally impede him. It wasn’t their fields he was invading, after all. Instead of which, the chance of a small Irish victory were obliterated by a “fair shoulder”. And if that was a fair shoulder, I’m Napoleon.