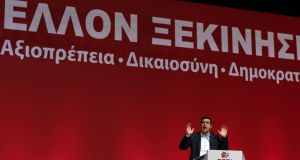 ‘A spectre is haunting Europe – the spectre of Syriza’. Above, Alexis Tsipras, leader of the Syriza party, speaking to his supporters at a pre-election party congress in Athens, last week. Photographer: Kostas Tsironis/Bloomberg

A spectre is haunting Europe – the spectre of Syriza. The likelihood that the left-wing party will come first in Greece’s election on January 25th has driven politicians and commentators across Europe into a frenzy of alarm. Angela Merkel’s government in Berlin has hinted that Greece could be booted out of the euro if Syriza wins power (conveying the message in its usual way, by leaking it to Der Spiegel and then denying it). Some of the outrage focuses on the party’s promise to roll back some of the harshest austerity measures Greece has endured and to reverse part of the country’s privatisation programme.

But the greatest fears aroused by Syriza among Greece’s neighbours concern its approach to restructuring the country’s debt. Such fears are ill-founded because Syriza’s debt proposals would not only be good for Greece but for the euro zone as a whole.

Contrary to many reports, Syriza is not threatening a unilateral default but wants Greece’s debt burden to be considered within a broader restructuring of sovereign debt in the euro zone. Its leader, Alexis Tsipras, has called for a “European Debt Conference”, based on the 1953 London Conference that wrote off half of post-war Germany’s debt and extended the repayment period for the rest over a number of decades. As Hans-Werner Sinn, one of Germany’s leading economists and president of the Ifo Institute for Economic Research, acknowledged recently, the 1953 conference was, along with the Marshall Plan, a key factor in enabling Germany’s post-war economic miracle.

The conference met from February 28th to August 28th, 1952, with the final agreement signed the following year and involved representatives from 20 creditor nations (including Greece, Portugal and Ireland) as well as Germany and the Bank for International Settlements. The United States, Britain and France took the lead, making clear from the outset that one of the aims of the conference was to strengthen the German economy. The preamble to the agreement said it should help to “remove obstacles to normal economic relations between the Federal Republic of Germany and other countries and thereby to make a contribution to the development of a prosperous community of nations”.

The final deal wrote off more than half of Germany’s debts, stretched out repayments on the remainder for 30 years and agreed that, from 1953 to 1958, Germany would only make interest payments. Finally, it was agreed that repayments in any given year should not exceed 5 per cent of Germany’s trade surplus. The agreement was a success – Germany paid off its remaining debts on time and with great ease and its economy rebounded to become the strongest in Europe.

Greece is not Germany and post-war Germany’s debt amounted to a much smaller proportion of its gross domestic product than Greece’s does today. Germany was, however, regarded internationally as a deadbeat debtor, having welched on various debt repayment deals between the two world wars. And the creditor nations’ forbearance in 1953 is all the more remarkable given how recently Germany had led Europe into a catastrophic war that also plunged its antagonists into debt.

Syriza’s proposal to deal with Europe’s collective debt problem multilaterally recognises that sovereign debt within the euro zone can no longer simply be viewed as a national issue. It also reflects the view of many mainstream economists that much of Europe’s public debt is unsustainable and that austerity policies are not only causing hardship but damaging the economy. In a paper published last November, the party’s chief economist, John Milios, suggests that a new debt conference should write down all euro-zone public debt over 50 per cent of GDP – more than €4 trillion. Under his plan, the European Central Bank would buy up all debt above the 50 per cent threshold and convert it to zero-interest bonds which would be repaid by creditor governments over many decades.

The plan involves no transfers of money or loans from one euro-zone country to another and Milios argues that the expanded role of the ECB is a less revolutionary idea now that the central bank has signalled its readiness to buy up private sector debt and has already massively expanded its balance sheet.

Regardless of the Government’s view of Syriza’s proposal on how to restructure public debt, Ireland should support the idea of a European Debt Conference based on the 1953 London Conference, for the sake of the euro zone as well as our own.