Why Greece should choose euro zone exit rather than dependence

Ray Kinsella: ‘What Greece needed was some protection from self-serving market forces and reform of its public sector. What was imposed was an ideologically-driven cult of austerity’ 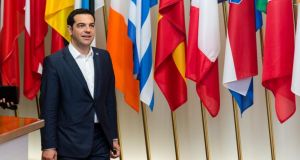 ‘Greece is more right than its critics. One doesn’t have to agree with the politics of the far-left in Greece to vindicate the integrity of the economic case they bring to the table.’ Above, Greek prime minister Alexis Tsipras walks in front of European flags after he participated in a bilateral meeting with European Commission President Jean-Claude Juncker on the sidelines of the EU meetings in Brussels on June 11th, 2015. Photograph: AP Photo/Geert Vanden Wijngaert

The narrative of the euro zone crisis, the epicentre of which is Greece, has been airbrushed. Germany’s insistence that the 2012 bailout programme is a realistic reference point for current discussion is misconceived. Its assertion that debt relief can be discussed only after the completion of the current programme, rather than being the obvious starting point for a new agreement, is profoundly mistaken.

The tenor of the euro zone’s criticism of the government of Alexis Tsipras has shifted from the patronising to the denunciatory, from faux long-suffering indulgence with a brash upstart to near visceral condemnation. The message is that the grown-ups are “exasperated” and “running out of patience” with Greece. Germany’s minister for economic affairs, Sigmar Gabriel, argues that “Greece’s game theorists are gambling the future of their country. And Europe’s too.”

This is revisionist rhetoric. Greece is more right than its critics. One doesn’t have to agree with the politics of the far left in Greece to vindicate the integrity of their economic case. What is true of a relationship is true also for a country: dependence is never healthy. Continued membership means continued dependence. Given the pressures being exerted on Greece, exit rather than dependence would be the better option.

In February German finance minister Wolfgang Schäuble insisted that Greece complete the 2012 programme, regardless of the sea change in politics since then and the evidence that austerity was taking Greece further into recession. He warned Athens not to question the framework of existing agreements or “everything is over”. It was a calamitous misjudgment.

The “negotiations” have demonstrated how big countries behave when small countries step out of line and just how easily history can be rewritten. Tsipras, in an interview with Le Monde, said the euro zone’s dominant players were, by degrees, bringing about the “complete abolition of democracy in Europe” and were ushering in a technocratic monstrosity with powers to subjugate states that refuse to accept the “doctrines of extreme neoliberalism”.

Joseph StiglitzFreefall: America, Free Markets, and the Sinking of the World Economy

The plight of Greece could have been largely avoided if Germany and the euro zone responded differently in the early stages of the crisis. They chose not to do so. This has contributed to the catharsis in Greece. From its initial rejection of the need for a bailout, Greece has been impelled into three successive bailouts, each ratcheting up pressure on the economy, on living standards and social capital.

This is not an apologia for Greece. What Greece needed was some protection from self-serving market forces and reform of its public sector. What was imposed was an ideologically driven cult of austerity embedded in a timeframe that was out of sync with the scale of the reforms required. The IMF’s own data confirms the negative impact of austerity on Greece’s capacity to adjust and reform.

So Germany’s insistence on the 2012 programme as the reference point for negotiations makes no sense. Too much has changed. The IMF is a technical institution. It does not do – or, at least, is not supposed to do – politics or ideology. But it has been “captured” and made an “enforcer” of the political objectives of the euro zone – an intrinsically political construct. The relationship between the IMF and the “European institutions” (the ECB and the European Commission) has been uneasy and, at times, fraught. Syriza understood this. The euro zone leadership lacked the insight to understand.

The issue of debt relief before – as compared with after – the closing-off of the 2012 programme is pivotal. It is the necessary condition to enable Greece to grow its economy, absorb adjustment and rebalance the debt/GDP ratio, so as to avoid continuing dependence. The situation is simple. Greece is illiquid and insolvent and has a level of debt it can never repay. It has a broken economy and a humanitarian crisis. These are, at least in part, the consequence of the anomalies and asymmetries at the heart of the euro zone itself and a failure of leadership.

A wiser leadership within the euro zone would have read the situation very differently back in February. For Greece to remain in the euro zone, an additional bailout programme is required. This would necessitate a very significant debt write-off. The troika and its political masters had the option of transferring the €7.2 billion funding still outstanding and closing out the 2012 programme.

This would have given the euro zone a fresh start with a new and inexperienced government under enormous political and social pressures. It lacked the insight. What compounds the folly is that it is being played out against a backdrop of a €1 trillion quantitative easing programme to mitigate the consequences of austerity on growth and “fireproofing” members of the euro zone against the impact on markets of Grexit. No vision and no common sense.

In the Le Monde interview Tsipras said: “If some, however, think or want to believe that [what is happening] concerns only Greece, they are making a grave mistake. I would suggest that they re-read Hemingway’s masterpiece For Whom the Bell Tolls.” The title resonates with what John Donne wrote: “. . .never send to know for whom the bell tolls; it tolls for thee”. Indeed.