We need a national reality check: the economy is growing, but not soaring 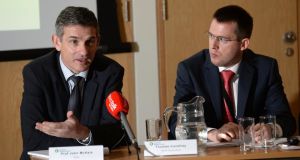 So let’s see what exactly is on Santa’s list of things that the Government has promised us, or various pressure groups are now calling for. We have more tax cuts promised in the 2016 budget, including the latest promise by the Taoiseach to cut the top marginal tax rate on many incomes to 50 per cent in the next budget. Public sector pay rises are back on the agenda – and some unions are calling for a reversal of all the cuts during the crisis. We are promised improvements in public services. There are still objections to paying any water charge – and now talk of a wider campaign against the universal social charge.

Our public debate is now framed by demands to spend more and tax less, with little mention of the obvious issue – where is the money going to come from? We need a national reality check.

Money could be created for the exchequer by an economy that was taking off like a rocket. The Irish economy is growing, creating jobs and doing well by comparison with the rest of Europe. But the figures produced for the first half – and particularly the astonishing 7.7 per cent growth rate in the second quarter – are distorted by multinational activity, as the Irish Fiscal Advisory Council pointed out in a report during the week.

Some big companies with European bases in Ireland are getting goods made overseas by contract manufacturers and the way this is accounted for is boosting their reported activity in Ireland and thus Irish GDP. That is what can happen when you have very big companies operating in a very small economy. If, say, the final outcome for GDP growth this year is 5.5 per cent – roughly what forecasters expect – then, the councilsays , real underlying growth will be closer to 3 per cent.

So the economy is growing, but not soaring. To use the famous Dunphyism, they’re good growth figures, but not great growth figures. We have some room for manoeuvre, but it is limited. But, emboldened by the data and spooked by the local and European election results and the polls, the Government made a crucial mistake. During the summer it started talking up the options that a stronger economy gave the exchequer. It thus set itself up for the inevitable public disappointment after the budget – and helped fuel the dissatisfaction that led to the explosion of anger over the water charges.

Worse still, it sent out the message to the public and the various interest groups that the crisis was over and there was cash to be spent.

When you point out the limited scope in the exchequer, those looking for more spending or specific tax cuts have a range of suggestions. For example, there is a call to “tax the rich”. These arguments ignore the fact that the richest 5 per cent of households – broadly those earning over €100,000 – already pay more than half of all income tax. According to the OECD we have one of the most progressive income tax systems in the developed world. Many talk of a wealth tax, but no one knows how it would work, or what it might raise.

I don’t believe there is a big pot of gold available from the fabled group of high rollers, many of whom are mobile and have very mobile assets. If you want to raise large sums in cash – from any kind of tax – then you need to get more money from a lot of people, and that means hitting the middle earners as well as those at the top.

The next bandwagon appears to be ending the universal social charge. This collects €4 billion a year – no wonder Minister for Finance Michael Noonan said on Friday that it is here to stay. Siptu argues that it should be replaced by something “more progressive”. But what? And how can the unions march demanding an end to the USC and higher public sector wages at the same time?

There are choices, but none are painless. Of course you can argue there are places where new taxes could be raised, or spending cut. This will be an issue for the electorate to decide, ultimately. But pretending there are easy options, when a 1 per cent growth shortfall next year could throw our figures off course, is crazy.

Can the political and interest group system not get its head around the need to manage our finances in a rational way without the troika being around to blame? Growth gives us some options, but we are not in a new era of plenty. There really is no such thing as a free lunch.