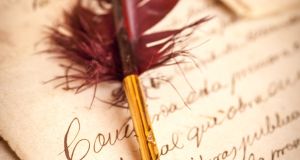 Robert Parsons Persse had been certified to be “of sound health of body and mind” when he handwrote his last will and testament and lodged it with his solicitor in March 1820. Photograph: iStock

Six-and-a-half years before the Court of Chancery in Ireland declared Robert Parsons Persse to be “a lunatic”, he had been certified to be “of sound health of body and mind” when he handwrote his last will and testament and lodged it with his solicitor, John Mahon, in Marlborough Street, Dublin, in March 1820.

The Court of Chancery proceedings were initiated by Persse’s first cousin and heir apparent, Robert Persse, who feared that his expected inheritance was being dissipated by another cousin, Burton Persse, to whom the sum of £13,000 had already been transferred (a sum equivalent to well over €1 million in today’s value).

Robert Parsons Persse was an only child. He helped his father to run the extensive and prosperous Castleboy estate, between Athenry and Loughrea, in Co Galway, before enrolling at Trinity College Dublin in 1803.

He inherited the Castleboy estate when his father died in 1812 and he was still running it prosperously a decade later, less than four years before the certification of the illness that forced him to move permanently from Galway to Dublin, where he remained, bedridden in his Merrion Square house, for the rest of his life.

Intemperance and neglect were blamed for the rapid deterioration of his mind and body.

In the year of his matriculation he had inherited from the uncle to whom he would later advance £13,000 for a pack of hounds with which he established the Castleboy Hunt Club, forerunner of the County Galway Hunt, which became better known as the Galway Blazers, so-named after a blaze that began during one of its post-hunt bibendums destroyed Dooley’s Hotel in Birr, in neighbouring Co Offaly.

More details of his lifestyle were contained in his last will and testament, which came to light after he died in 1829 and which is reproduced in The Persse Family of County Galway, by Gerry Kearney. In it, Persse described a woman named Bridget Cohen as “my present kept girl” and he disclosed that she had borne him a son and a daughter who survived.

He also named four other women who had borne him children (Mary Calnon, Honora Fahey, Mary Knee and Jane Maheron). He left £50 sterling a year to Mary Calnon and Honora Fahy and the same amount each to the daughters they bore him, respectively Nappy Persse and Eliza Persse. He left the same amount to Jane Maheron, mother of his son Patrick. He left no money to Mary Knee, but he bequeathed £50 sterling per year to each of the three unnamed children he had by her.

Bridget Cohen – the “present kept girl” – was the principal beneficiary of the will. She was to get the entire Castleboy estate and its sub-divisions, if neither of his sons, Patrick (by Jane Maheron) or George (by herself) produced a male heir. She was also bequeathed £7,000 (about €659,995 today) and “all my property” in “the Bank of George Latouche and Co”, as well as “the residue of all my property”, excluding the cash legacies.

Various Persse relatives challenged the will – and fought each other for possession of Castleboy – in proceedings that went on for decades.

A special jury at the Galway Assizes failed to agree on Bridget Cohen’s entitlements. Nobody disputed that she had been Robert Parsons Persse’s mistress, or that she was the mother of two of his sons, but it was claimed that he had ceased to cohabit with her before his death. Persse’s solicitor, John Mahon, a witness to the will, said that his client “was greatly given to the society of low women” and that Bridget Cohen (otherwise known as “Biddy”) had initially come to his demesne as a servant. (The Court of Chancery had ruled that she should not be removed from him if she was a faithful and attached servant who brought satisfaction and comfort to him).

The battles for control of Castleboy that began in the Court of Chancery in Ireland in 1828 continued until the final year of the 19th century, despite a definitive ruling in the British House of Lords in 1856 that granted possession to Dudley Persse (a son of Robert, who had initiated the Court of Chancery case in 1828 and the father of Isabella Augusta, the future Lady Gregory).

These and further futile attempts by one of the third generation of Persses to claim ownership of Castleboy echoed in longevity, and in the transfer of wealth from litigants to lawyers, the Jarndyce and Jarndyce proceedings in Bleak House by Charles Dickens.

1 Love Island tribute to Caroline Flack hides the truth
2 Cardiologist saved by paramedics after heart attack at Dublin Airport
3 Two Irish passengers on cruise ship test positive for coronavirus
4 David Baddiel comes to Ennis to meet a Holocaust denier
5 Q&A: How long could it take to form a new government after Election 2020? Could things get messy?
Real news has value SUBSCRIBE