We are still haunted by the ghost of the Celtic Tiger 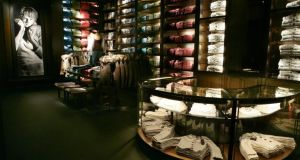 “There’s a bit of a buzz around Dublin at the moment . . . Perhaps it’s a delirium induced by Abercrombie & Fitch pumping out its cologne on Dame Street.”

Ever get the feeling you’re being haunted? A presence that you can sense but not prove? Maybe it’s the Halloween vibe, as bangers explode with greater frequency at night and kids scarper to their flats with stolen trolleys full of wooden pallets for bonfires, but there is a spirit haunting the capital.

The ghost of a healthy economy is stalking the streets, banshee-like, clip-clopping in her Louboutins and rattling Tiffany chains. It’s muttered in hushed tones that, you know, there’s a bit of a buzz around Dublin at the moment.

Don’t say it too loudly! Perhaps it’s a delirium induced by Abercrombie & Fitch pumping out its cologne on Dame Street with an enthusiasm that would make the previous top street-air polluter, Lush, around the corner, blush.

But mind-warping fragrances aside, something is happening. There’s an understandable nervousness that now accompanies economic recovery. It’s not yet a case of “the boom is back, everyone hide”, but you simply can’t ignore the independent businesses that are inhabiting previously dormant retail units or the remarkable restaurant frenzy, as broke 20-somethings are overlooked to target those in their 30s and 40s re-emerging from the hibernation of disposable income.

Life returning
More affordable retail rental prices and flexible leases are bringing life back to the city. South William Street is a fine example of the buzz that’s getting louder. In just a short while, dormant units have been populated with a cheesecake shop, a vintage store, a large restaurant and a make-up store. These affordable luxuries are popping up more frequently than what has been typical in city retail units over the past couple of years – lowest common- denominator discount stores.

Tea shops, cafes and other independent businesses are appearing almost out of nowhere, and there’s a bit of economic omertà going on: don’t talk about it in case you jinx it. I think it was Bill Bryson who wrote that if you saw a tiger sitting calmly in the street, you’d probably be tempted to go up and pet it, at which time it would most likely rip your head off.

There’s a big difference between rebuilding the urban economy and flirting with the Celtic Tiger again – fool me once, and all that. But the ghosts are everywhere. Writing this article in a cafe, I’m listening to two young men having a conversation I don’t understand about the opportunities for software development in the diamond industry and the profits to be made. At the top of Grafton Street the other day, one besuited man said to another that the ATM they were at was only dispensing fifties. “Hmm,” I thought, “that sounds vaguely familiar.”

A few minutes later my toes were nearly removed by a new Ferrari turning a tight corner at speed.

The previous weekend I was in a bar in town, eavesdropping on a conversation outside, with two chaps talking about “Barbados” and “golf” and “jets”. Had I unearthed some strange portal behind a burrito bar? Had the space-time continuum been warped by Bubble Tea outlets? Are faux-vintage sweet shops opening a vortex back to the early noughties?

There’s a danger that, to create economic prosperity again, we’ll look to the superficial cues of the boom as touchstones of success. But there’s a difference between real prosperity and the sequined stuff. When the Celtic Tiger was in full swing, one of the main social articulations of wealth was horrible bars. Places that pretended to be “exclusive” or “VIP” channelled a cheesy and naff aesthetic that was the perfect embodiment of Celtic Tiger idiocy. I don’t think anyone felt at home in those places.

The Irish obsession with refurbishment saw publicans and businesspeople spend hundreds of thousands on fittings. Every- one knows the quality of a nightspot is more about the people in the room than the cost of light fittings or couches. You’d think that after all that rubbish, bars opening now would search for some kind of authenticity, but in that department, glitter, not grit, is the case.

Dangerously familiar
One thing that feels dangerously familiar is the rental market. The days of queueing for viewings are back. Stories of prospective renters being gazumped by the competition turning up with wads of cash to secure apartments are plentiful.

Students, especially, are being sidelined in their search for places to live. In the city centre and its environs, it is incredibly difficult to find a fair-priced rented home without having your head melted by property websites, endless viewings, climbing rents and agents informing you the gaff is already gone. At the same time, there are apartments for sale in Temple Bar for less than €150,000.

There’s not much point in talking up the urban economy. Unemployment and emigration are still heartbreaking scourges. And the ghost of the Celtic Tiger is something to be genuinely scared of. But as the broadcaster Philip King said recently, we can’t keep hoping for a better past. We need a collective exorcism of the Celtic Tiger ghost, and a search for a diff- erent kind of spirit to usher in the future.

1 Covid-19 incidence in the Republic set to surpass that of UK
2 Coronavirus: Non-essential travel from US set to be banned within days
3 Irish in Australia: ‘We are in for a few hard years’
4 ‘Our hearts are broken’ – implications of fresh lockdown sink in
5 German nudist chases wild boar that stole laptop at Berlin lake
Real news has value SUBSCRIBE