Vowels of disobedience – An Irishman’s Diary about typos 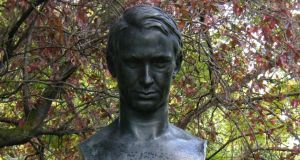 “In January 1960, Tom Kettle’s bust was removed from its pedestal one night by persons unknown. It was missing for 48 hours before a passer-by noticed it at the bottom of the Green’s lake, from where it was retrieved.”

In the inscription on his monument in Stephen’s Green, Tom Kettle is said to have died at “Guinchy” in northern France. But the place in question is “Ginchy” (pronounced with a soft “G”) on maps and roadsigns. So is this a typo, as a number of eagled-eyed readers suggest?

I’m not sure. If it is a misspelling, it’s common enough in archives to suggest there were local variants of the name once. Or maybe it just arose from confusion with another town in that theatre of war – Cuinchy – where Irish regiments also fought. If so, that’s not a mistake you would want to make in a walking tour of battlefields. Ginchy and Cuinchy are 70km apart.

The Kettle monument was itself a bit of a battlefield, in the 1950s and 1960s. And although belligerents included the Literary and Historical Society of nearby UCD, it wasn’t spelling that upset them. The question was whether Kettle should be commemorated as a hero, with opinion splitting on the usual lines, between young Fine Gaelers (pro) and young Fianna Fáilers (anti).

The pro-side laid wreaths every year, anyway. But in January 1960, Kettle’s bust was removed from its pedestal one night by persons unknown. It was missing for 48 hours before a passer-by noticed it at the bottom of the Green’s lake, from where it was retrieved.

FFers aside, suspects might have included the university weight-lifting club, because the bronze was estimated at “six stone” (38kg). In any case, unlike the infamous “Tomb of the Unknown Gurrier”, which had been consigned to the Liffey by students from the other university, the bust was reinstated and is still in place.

Among those who gathered there for Kettle’s centenary last week was Minister for Foreign Affairs Charlie Flanagan, a UCD graduate who recalled that in his student days, the monument was a popular rendezvous spot, a southside Clery’s clock.

Like the L&H wreath-laying, that must have ended when UCD was banished from Earlsfort Terrace to the outer darkness of Belfield. In the interim, having survived the 1960 refurbishment, the monument’s “Guinchy” is probably indelible now. If the spelling is wrong, maybe we should just think of it as a memorial within the memorial, the redundant “U” standing for “university”, now sadly departed.

A more common confusion involving Duns Scotus is his nominative overlap with a philosopher of earlier vintage, John Scotus Eriugena, the man who used to adorn the £5 note.

In Latin, “Scotus” meant “Irish” or “Gaelic”. Thus, John Scotus Eriugena translated, effectively, as “John, the Irishman born in Ireland”, presumably to differentiate him from the many Irishmen (then as now) born in other countries, and subject to reclamation when they prove good at something, such as football.

Duns Scotus is today generally considered a Scottish Scot. But as irishphilosophy.com explains, at least one Scots writer of former centuries claimed many Irish saints for his country, while an Irish scholar retaliated by arguing that all those designated “Scotus” were ours. Even today, there is an argument that Duns Scotus was born in Downpatrick. That would make him an An Dún Scotus.

One correspondent recalled a poster from the rowing club at her university, which read: “Nasty? Brutish? Short? Ever thought of coxing?” Another’s letter centred on an aural typo – if there is such a thing – which also involved a rogue “U”.

I don’t mean Uganda, although that was indeed the scene of the joke. The writer had worked at a university there in the 1960s. And he recalled a local colleague telling him that, in political science lectures, the natives had always understood Hobbes’s warning to be of a life that was “nasty, British and short”.