Vincent Browne: Bertie’s back and so is the silly season

Bertie Ahern achieved plenty, but he has way too much baggage for a comeback 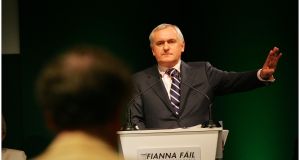 Former taoiseach Bertie Ahern: “He would be skilled in dealing with Donald Trump, partly because neither would understand what the other was on about.” Photograph: Bryan O’Brien

There is and was no prospect of Bertie Ahern returning to electoral politics either via Fianna Fáil or otherwise. This is a silly season story long after the silly season should have expired.

It won’t happen because Bertie almost certainly would not want it. If he did want it, he is shrewd enough to know that it would be a debacle because of his baggage (of which more below). Micheál Martin would not countenance it because of that baggage and he made that very clear last Thursday.

Not that Bertie hasn’t an impressive CV, which would otherwise render him more than qualified for senior office again.

He was central to the success of the Northern Ireland peace process, arguably the most significant event in Irish history since independence. For that alone Bertie Ahern deserves recognition and the gratitude of the nation, although neither recognition nor gratitude is on offer apparently.

He was – and probably still is – a highly skilled negotiator. It was he who negotiated the social partnership agreements in the Haughey era. As president of the European Council in 2004, he was a central figure in the negotiations that led to a constitution for the European Union, a project later aborted by the electorates of the Netherlands and France. And, of course, there is his role in the Northern Ireland peace process.

He would be deft at negotiating a deal for Ireland out of the Brexit shambles. He would be skilled in dealing with Donald Trump, partly because neither would understand what the other was on about.

Were he to return to electoral politics as a Fianna Fáil candidate, he might have a good chance of winning a seat for the party in Dublin Central, where for decades he was the poll topper.

Then again hardly anybody protested at the time, and Fine Gael and Labour would have caused an even greater disaster.

Second and crucially, there is the planning tribunal.

Allegations were made that he had received money from Cork developer Owen O’Callaghan, allegations that were probably untrue, but they were enough to cause the tribunal to investigate Bertie’s finances. What was revealed was baggage, lots of baggage.

First, it emerged that Bertie had got rid of his bank accounts immediately following the breakdown of his marriage in 1987 and dealt only in cash for several years, during which time he was a minister in government and minister for finance from 1992.

The tribunal concluded that Bertie “did not truthfully account” for the origins of £165,000 in lodgments made to accounts held in his name, the name of his then minor daughters and in the name of his then partner Celia Larkin between 1993 and 1995. It took the same view of his explanation for £50,000 that ended up in an account operated for the benefit of Bertie and Tim Collins.

The tribunal was unable to discern from where most of these moneys came, and Bertie still insists that nothing untoward was involved. But even if he did get it all from savings, from his pals, from a few other gifts and from a spot of betting on the gee-gees, does he want all this to be gone over yet again?

The consequence of this is 8,000 people homeless, more than 100,000 families waiting for a house, the exploitation of so many in rental accommodation, the fact that much more than 50 per cent of the population live on taxable incomes of less than €30,000 in one of the richest countries in the world.

During his time as taoiseach the scale of inequality in this society deepened considerably, and his own constituency of Dublin Central remained an impoverished black spot.

But such issues don’t fit the contemporary airhead news agendas in a never-ending silly season. Not even the fact that the best the present Taoiseach and Government can do on regeneration, after all the ballyhoo and photo-ops of a few months ago in the north inner city of Dublin, is a dollop of €8,000 to each of eight community organisations there. As if that would manage even to clean the streets between now and Christmas.

3 Kathy Sheridan: Young Shinners don’t get to decide what is in past

4 Gordon D’Arcy: Where is Ireland’s progress under David Nucifora?