Vatican meeting shows a church incapable of holding itself to account 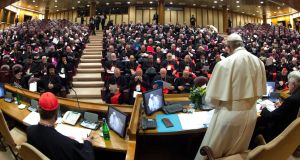 Pope Francis, cardinals and bishops at the opening of a global child protection summit for reflections on the sex abuse crisis within the Catholic Church, February 21st at the Vatican. Photograph: AFP/Getty

It is more than 30 years since the scandal of child sexual abuse in the Catholic Church began to emerge across the English-speaking world.

At first a few isolated survivors told their stories, soon followed by an avalanche of revelations. Regardless of the location, the same patterns appear: disclosures followed by cover-ups, priests relocated to abuse again. The church’s response has been abysmal, and it is only through investigations by the civil authorities that we now know the full truth. In Ireland, the Ferns, Ryan, Murphy and Cloyne reports each revealed the same dismal pattern: children were recklessly endangered to protect the status of the church.

6 ‘Do I have to do everything around here?’ Irish women and the ‘invisible job’

13 Roy Greenslade and the IRA: I was his editor. His admission raises hard questions

14 Steady rise in number travelling further than 10km from home

15 Portrait of 1916 nurse ‘airbrushed from history’ unveiled in Seanad

29 Smother: This is what an Agatha Christie-themed Glenroe looks like

31 Ken Early: Klopp all at sea as Liverpool continue to flounder

33 Stuff happens: Why you have so much household clutter – and how to get rid of it

34 Pandemic savings: How some people have saved thousands by working from home