Varadkar must not let Fianna Fáil define him 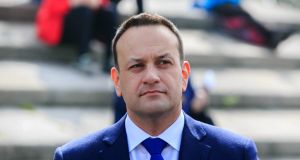 Leo Varadkar during the Good Friday Way of the Cross procession in the Phoenix Park, Dublin. Fine Gael still leads Fianna Fáil in the opinion polls and the Taoiseach is still a more popular leader than Micheál Martin. Photograph: Gareth Chaney/Collins

Chatting about the European elections – as most in a Leinster House winding down for the Easter recess were – one Minister considered the candidacies of Mick Wallace and Clare Daly and allowed himself wonder if Fianna Fáil had a hand in it.

Not, of course, that anyone would seriously suggest that either Daly or Wallace would take their lead from Fianna Fáil. The talk of the European contest this week was all about who was running, who would win, and what it would mean for the Dáil and the next general election if some TDs departed for Brussels and Strasbourg.

The initial calculation was that if Daly and Wallace are both elected to the European Parliament – with Wallace seen as the longer shot – then Fianna Fáil could be the beneficiaries.

If Daly is to leave Dublin Fingal, Fianna Fáil believes its chances of securing a second seat with Lorraine Clifford Lee will improve. The same applies in Wexford, where the party wants Lisa McDonald to join James Browne in the Dáil.

Such is the suspicion – and admiration – among politicians of Fianna Fáil’s skills in the dark arts that our Minister fancifully thought maybe, just maybe, the Independents 4 Change TDs had been encouraged by Fianna Fáil TDs in the Dáil bar to give it a go in Europe, knowing they would benefit in the long run.

It is in that unpleasant yet essential arena of politics that Micheál Martin has achieved his most notable success of this Dáil. Manoeuvring, calculating, spinning, communicating, positioning, attacking – the areas of politics voters say they dislike and politicians profess, with a straight face, to agree with them.

Identifying the likely enemy early, Martin and his party set to work on defining Leo Varadkar in the minds of voters before Varadkar had a chance to define himself.

It started well before Varadkar became Taoiseach, when Fianna Fáil cast him as a minister who preferred to commentate about his own brief rather than focus on matters of policy or substance.

He was also tagged as a metropolitan elitist, an attack memorably summed up by Barry Cowen during the first round confidence and supply talks between Fianna Fáil and Fine Gael in 2016. He said Varadkar, negotiating for his party, wanted to go for drinks in the high-end Marker Hotel in Dublin. Cowen, regaling his parliamentary party with the tale, claimed Fianna Fáil was more interested in “pints with the people”.

All through Varadkar’s honeymoon, when his personal ratings reached heights unseen since Bertie Ahern and Fine Gael climbed to the mid-30s in opinion polls, Fianna Fáil kept at it.

The reason many Fine Gael TDs voted for Varadkar – that he was young and was a good communicator – was steadily being turned against him. It usually takes years or terms in office for that to happen. Varadkar is not yet two years in the top job.

The Taoiseach is not now as popular as he was, which is to be expected of the leader of a party seeking a third term in Government Buildings, but what is remarkable is how Fianna Fáil’s attacks have seeped into the public consciousness. Its success in painting Varadkar as a creature of spin has been a deliberately planned and well executed triumph of spin itself.

Satirists now depict an image-obsessed Taoiseach, while Fine Gael TDs report a belief in rural Ireland that he his indifferent to their cause. In this, Varadkar has not been helped by some of his Ministers.

That the public face of the Government is overwhelmingly focused around the Greater Dublin Area and urban Cork – think Coveney, Donohoe, Harris, Murphy, Doherty and Varadkar himself – speaks to the failure of Ministers appointed to represent rural Ireland to make an impact.

Despite all that, Fine Gael still leads Fianna Fáil in the opinion polls, and the Taoiseach is still a more popular leader than Martin, whose success in damaging Varadkar has not translated into a dramatic swing to his party.

Fianna Fáil has still not been forgiven by large swathes of the electorate for the economic crash, yet Fine Gael seems curiously reluctant to punch the most obvious of bruises. Some in Fine Gael almost seem to be neutered, as if they cannot criticise Fianna Fáil simply because the Government relies on Martin for support under confidence and supply.

The mildest criticism – such as Varadkar accusing Martin of “finger wagging” – attracts horror that Fine Gael is being disrespectful.

Fianna Fáil TDs cannot quite believe their luck. Fine Gael deputies wait: both for the push back against the Fianna Fáil definition of Varadkar, and for Varadkar to define himself and explain why voters should give him and Fine Gael another term.

Perhaps the Taoiseach is playing a patient game of rope-a-dope, keeping it all in reserve for a general election. But by then it could be too late; the damage may be done.

With this Government and the confidence and supply deal in their final months, the time for holding fire may have passed.

5 Air to the throne: Meghan and Harry set to lift lid on royal split in TV interview