Up the pole: The strange phenomenon of Stylites, ancient and modern 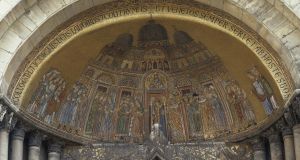 If newspaper columnists had their own patron saint – as opposed to being part of St Francis De Sales’s general writers’ portfolio – it might have to be Alypius the Stylite, a now obscure acetic whose feast-day fell earlier this week.

Not that Alypius was the only, or even best known, of the Stylites, a group of people who sound like a 1970s disco band but who were actually ancient holy men, found mainly in the Middle East between the 5th and 10th centuries.

Their collective name derived from the Greek stylus (meaning pillar) because, as explained by Brewers Dictionary, they “took up their abode on the tops of pillars, which were sometimes equipped with a small hut, from which they never descended”.

The first and most famous was St Simeon Stylites (390-459AD), a Syrian who, to escape his ever-growing number of visitors, spent more than 30 years standing on top of a pillar near Aleppo, the height of which he gradually increased to nearly 20 metres, while still preaching regularly to the masses below.

As for Alypius, who lived in what is now northern Turkey, his feat was even more epic. Having erected a pillar beside his church, it is claimed he stood on top of it for 53 years until his legs gave in. Then he refused to descend, lying down for the remainder of his life, another 14 years, until he died aged 118.

Edward Gibbon, historian of the Roman Empire, took a dim view of the practice, as he did of organised Christianity in general. He doubted whether “the fanatics who torment themselves [in this way] are susceptible of any lively affection for the rest of mankind”. But he wrote almost admiringly of how Simeon maintained his posture for so long without falling: “Habit and exercise instructed him to maintain his dangerous situation without fear or giddiness, and successively to assume the different postures of devotion.

“[His] most familiar practice was that of bending his meagre skeleton from the forehead to the feet; and a curious spectator, after numbering twelve hundred and forty-four repetitions, [stopped counting]. The progress of an ulcer in [Simeon’s] thigh might shorten, but it could not disturb, this celestial life; and the patient Hermit expired, without descending from his column.”

On which note, and on second thoughts, perhaps the patronage of the Stylites would suit only a certain kind of newspaper column: the ones stripped vertically down the page, with the writer’s mugshot on top.

Those are often the preachier ones too, I find, which may be no coincidence. By contrast, the more horizontal format of, say, the Irishman’s Diary, encourages humility and groundedness, even on top of the page. Now that I think of it, really, this is not so much a column as a plinth.

The Stylite phenomenon had died out by the end of the first millennium, but in line with Marx’s theory of history repeating itself as farce, it experienced a revival near the end of the second, with the “pole-sitting” craze of 1920s America.

By then it was nothing more than entertainment, or in many cases an extreme form of advertising as poll-sitters were paid to promote businesses and products. Either way, its greatest exponent was a New Yorker called Aloysius Anthony Kelly (“Shipwreck Kelly”).

A “stocky, blue-eyed, battered little Irishman”, Kelly had been born in the Hell’s Kitchen area of Manhattan, where he was orphaned in infancy. Later he went to sea, changed his first name to Alvin and survived whichever misadventures gave rise to his nickname.

But the best-known chapter of his career started in 1924 when he spent time sitting on top of a flagpole in Philadelphia, possibly as a publicity stunt for a store. Thereafter, for several years, he set and broke records for altitude and endurance, culminating in a 49-day sit at 69 metres in Atlantic City.

Many others imitated him, but Kelly was the prestige brand, touring widely. Then the Wall Street crash happened, and maybe the novelty was wearing off anyway. By 1929, the latter-day stylite fad had peaked.

Agile and fearless, Kelly had managed even to sleep on his precarious pitches, by hooking his fingers into holes in the flagpoles. He dismissed the dangers involved, claiming he ran fewer risks than window cleaners. And as with Simeon, Alypius, and the others, he may indeed have been safer in the air. He died in 1952, at street level, after being hit by a car.

1 Harry and Meghan will no longer be working members of British royal family
2 Netflix: The best 101 films to watch right now
3 Chris Hadfield on the climate crisis: ‘The world has seen much, much worse’
4 Peter Casey on the campaign trail: ‘My ideal job would be minister for health’
5 Dublin gangland figures involved in Drogheda feud that killed 17-year-old
Real news has value SUBSCRIBE