Una Mullally: Your world will change when you come out as the person you are 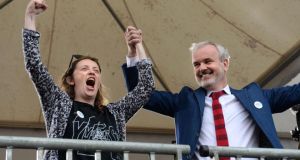 Yes campaigners Una Mullally and Colm O’Gorman at Dublin Castle on Saturday for the results of the referendum on marriage equality. Photograph: Dara Mac Dónaill

My girlfriend, Sarah, tells a story about a lesbian night in Dublin in the 1990s. She had just established the gay society in DIT with her friend Barry, making them the only two members. Lesbian nightlife was thin on the ground, and as far as she was concerned there were just a handful of gay women her age out in Dublin. One women’s club night was on a Saturday once a month, upstairs in JJ Smyth’s on Aungier Street. Entry was £1.50 for the unwaged.

‘Blanket on the Ground’

Blanket on the Ground

“Remember back when love first found us/ We’d go slipping out of town/ And we’d love beneath the moonlight/ On a blanket on the ground/ I’ll get the blanket from the bedroom/ And we’ll go walking once again/ To that spot down by the river/ Where our sweet love first began/ Just because we are married/ Don’t mean we can’t slip around/ So let’s walk out by the moonlight/ And lay the blanket on the ground.”

As the women sang the lyrics at the top of their voices, the penny dropped. These women were married. “Just because we are married/ Don’t mean we can’t slip around.” This night was an escape from their husbands. For a couple of nights a year they would slip out into JJ Smyth’s and be who they were, before returning to the married, heterosexual closet in which they were hiding. Sarah often wonders: where did those women go?

While gay men have born the brunt of physical and legislative homophobia in Ireland, due to an adversity and obsession homophobes have with male sexual acts, the suffering of lesbians was much more insidious. They were made invisible. Women’s sexuality has always been locked away in Ireland, like covering the good furniture with plastic sheeting, so there has always been something slightly more subcultural about female gayness here. It was perhaps easier to hide, but then the prospect of hiding forever became very real.

The act of coming out

When people talk about there being “more” gays and lesbians around in Ireland these days, there are not, there are the same number of gay people, it’s just that now they are able to come out and not be instantly shamed or beaten or arrested or driven out of the country, as is the case in so many nations around the world. This referendum was really won by any Irish person who ever came out, and the person who they came out to accepting them, and giving them the space to live truthfully.

I think over the past few months the LGBT community of Ireland has given the nation a lot to think about when it comes to how to hold yourself; with strength, with dignity, with pride, with resolve, with solidarity and with purpose. But straight people can also learn a lot from the act of coming out, which is not just about self-examination but is also about living a true life. Plenty of people spend their lives doing things they don’t want to do. Plenty of people spend their lives being who they don’t want to be. Coming out is one of the things that exposes us: I am what I am, and that’s that. Deal with it.

When thousands of people were crying and hugging at Dublin Castle on Saturday, myself among them, I couldn’t help but think of all of those who lived secret lives, those who never even had the courage to live secret lives at all and hid forever, and how so much of their potential in society was lost. They never got to know the joy of holding their partner’s hand in the street. They were denied the experience of being protected by the Constitution. They never knew what it would feel like for people to stand up for you. Their love was never going to be public. They hid. And hiding eats away at you.

Whatever about being gay, maybe you’re hiding inside an unhappy relationship. Maybe you’re hiding your real ambition in a job that isn’t satisfying you. Well, look at your gay brothers and sisters and think how they’ve had it. And then come out as your true self. It won’t be as hard as you think. Honour those who never had the privilege of living how they yearned to. Watch how your world shifts when you’re finally in control of it.