Facts and digital literacy must kill off QAnon ‘documentaries’ 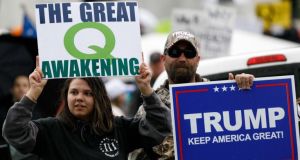 QAnon conspiracy theorists: There are QAnon “documentaries” loaded with false claims and the conspiracy has been gathering followers across social media, particularly on Facebook. Photograph: John Rudoff/Anadolu Agency

Last week, Twitter began suspending accounts that promote the QAnon conspiracy. In May of this year, a small protest took place on O’Connell Street where at least one sign or banner featured the acronym WWG1WGA. That acronym means Where We Go One We Go All, and is one of several mantras associated with QAnon, a conspiracy movement that can be loosely framed as a digital cult, which has been bubbling away online, and increasingly offline, over the past 2½ years.

QAnon emerged from the debunked “Pizzagate” conspiracy theory. In 2016, when WikiLeaks published the emails of Hillary Clinton’s then campaign manager, John Podesta, the instigators of the Pizzagate conspiracy falsely claimed that the emails were loaded with code relating to paedophilia and human trafficking. The garbled conversations across online discussion forums including Reddit and 4chan, culminated in a man turning up at a pizzeria in Washington DC called Comet Ping Pong to free non-existent trapped children from a non-existent basement. The following year, someone calling themselves “Q” began posting false claims on the discussion boards 4chan and 8chan that formed the architecture of the ever-evolving QAnon conspiracy. In broad brushstrokes, the conspiracy attests that a group of paedophiles rule the world, and Donald Trump is the saviour who will put an end to their reign by battling internal forces in the US military and government.

1 Production at Brady’s Ham plant in Kildare stops after 80 staff test positive for Covid-19
2 Scientists uncover biological signatures of the worst Covid-19 cases
3 How a ship abandoned by its owner brought deadly cargo to Beirut
4 ‘I wandered around Dublin wondering: Is this what they call a capital city?’
5 Covid-19 nonsense peddled by celebrities needs to be challenged
6 Caroline Flack died by suicide after learning of prosecution, inquest finds
7 Officials refuse to rule out ‘Midlands lockdown’ following Covid-19 surge
8 Masks Q&A: Who has to wear them in shops and what happens if you don’t?
9 Well-known figures in Irish soccer arrested over €3m heroin haul
10 Fresh investigation into the murder of Michaela McAreavey in Mauritius
11 Coronavirus: Residents in Kildare, Laois and Offaly urged to take extra care after cases spike
12 Scarlet for ya: Paul Mescal does classic Connell in The Rolling Stones’ new video
13 ‘Coming home to Ireland felt like a gamble. I felt safe in Korea’
14 Tributes paid as boy (15) who fell from Powerscourt Waterfall named
15 Gardaí make 160 arrests for drink- and drug-driving over weekend
16 Meat plants Q&A: The lingering coronavirus threat
17 Simon Coveney: Risk of nuclear catastrophe is unacceptably high
18 Two men face fraud charges over £1.2bn sale of Nama’s NI loans
19 Not for the birds: Keep your blueberries for these delicious oat slices
20 Wifi problems? Quick tips to get your home internet out of the slow lane
21 Donald Trump’s problem is that he is not authoritarian enough
22 New York’s attorney general sues to dissolve National Rifle Association
23 Murder accused claims partner died during sex act, court told
24 Suspect arrested as gardaí allege ‘corrupt practices’ at statutory body
25 Unholy war: Frank McNally on controversial memorials of a Dublin cathedral
26 Gardaí surrender 13 people to Polish police
27 Irish Olympian’s gilt-edged former Monkstown home for €3.45m
28 When I think it won’t hurt too much, I imagine the children I will not have
29 Coronavirus: Ohio governor tests positive ahead of Trump meeting
30 Family News, a short story by Naoise Dolan
31 Irish in Canary Islands: Life has changed dramatically
32 When Covid subsided, Israel reopened its schools. It didn’t go well
33 John Hume laid to rest by family and friends in town he loved and served so well
34 Teenage boy dies at Powerscourt Waterfall in Co Wicklow
35 ‘I’ve had my butt kicked for the past three years’: Jamie Oliver on fame and failure
36 Bridie Connaughton obituary: Passionate redhead with great sense of fun and mischief
37 TikTok to invest $500m in data centre and create ‘hundreds of jobs’
38 Taoiseach signals Covid-19 impact on health and housing
39 Covid-19 may spread more easily in schools than thought, US report warns
40 Coronavirus: Community transmission picking up pace as only eight counties see no increase in cases
Real news has value SUBSCRIBE