None more gloriously cynical about creeping commercialisation than LGBT+ community 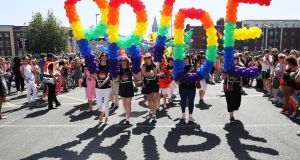 And throughout the parade, this protest continued. It wasn’t the branded floats that drew the most emphatic cheers and hollers, but the blocks within the parade determined to remind people that Pride is protest. There were groups protesting Israel’s treatment of Palestinians; parents calling for full family rights, and the brilliant Radical Queers Resist, a group that sprung up during the Repeal campaign and is still challenging the disgusting anti-choice imagery that litters the city.

I saw one counter-protestor, a lone man standing outside a church with a sign that said “sodomy is sexual abuse”. He was cheered by gay men in the march who stopped to pose for selfies, laughing at the ridiculousness of it all, and obviously the umpteen ironies. For the first time, members of the Defence Forces marched in uniform, including a friend of mine who texted me the previous day saying it was a far cry from her early days as a recruit. In Smithfield, Mary McAleese – a hero to the LGBT+ community – gave a brilliant speech.

As for the commercial and corporate element, no one is as gloriously cynical about such targeting, than the LGBT+ community itself. I absolutely appreciate the positive aspects of visibility across the city, with businesses displaying rainbow flags and bunting. It’s brilliant to feel so included in your town. But one can appreciate the visibility aspects, and also deplore the corporate nonsense that commercialises Pride. As a colleague of mine instructed me in how to deal with PR companies trying to give journalists free things in the hope of coverage when I started out in the Sunday Tribune, “astound them with your ingratitude.”

A week after I joked about try-hard Pride-related bank advertising, a friend of mine replied with the concept “GAYTMS”. Lo and behold, at the weekend, one Irish bank had actually cashed in on the joke unbeknownst to itself, framing ATMs in the city in gold, presumably because gay people respond only to sparkly, shiny things (which is only half true.) Some 60,000 people marched in this year’s parade. That’s a 100 per cent increase on the 30,000 who marched last year. Sure, the weather helped, but Ireland is becoming a much more inclusive place, one where LGBT+ people feel increasingly supported. Homophobia and transphobia obviously still exist, and non-LGBT+ people really need to step up and halt it where they see it or hear it. That’s their responsibility.

I marched with teenagers and youth workers from all over the country, groups from Donegal and Laois and Waterford and Kilkenny and Louth. For many it was their first Pride. The previous day, the world’s first comprehensive National LGBTI+ Youth Strategy launched, the development of which I chaired the oversight committee of for the last year and a half. The Strategy has 59 actions across education, mental, physical and sexual health and more.

At the launch in Meeting House Square in Temple Bar, a lesbian friend of mine who came along said she couldn’t even begin to grasp how it must feel for queer teenagers to be experiencing their lives as they are now, to have access to so many allies among their peer groups, to be out in school, to be able to link in with LGBT+ people their own age, to see political and social support for their rights, and to experience so much visibility. After the young people on stage had spoken so eloquently about understanding each other’s experiences across gender identity and sexuality, and assessing how seismic it must be to be linked in with other people just like you at that age, my girlfriend said to me, “The country that these kids are growing up in! I mean, Jesus, I couldn’t even find someone who liked Prince.”

Rewind three years ago, and there were prominent media commentators, fundamentalist Catholic lobbyists, and politicians who were allowed platforms to say that we were lesser than, that we shouldn’t raise children, that we did not deserve equal rights. Doesn’t that seem so ridiculous now? I think LGBT+ people are still coping with the PTSD from that referendum. Unacceptable oppression remains the reality in the 73 countries – nearly 40 per cent of the world – that criminalise homosexuality, not to mention the countless others that no longer criminalise being LGBT+, but where homophobia and transphobia are rife and where queer people live in fear.

Our queer youth are riotously fabulous agitators for further progress

I have never experienced a Pride march like the one at the weekend. For anyone who thought that the LGBT+ community would rest on its laurels after marriage equality was achieved, they will be heartened to know that the political energy was stunning. For anyone who fretted about the homogenisation of the community, don’t worry, our queer youth are riotously fabulous agitators for further progress. Watching the families gather in Smithfield at the end of the march, I heard a friend say, “we’re a great little country all the same, aren’t we?” Some days, we really, really are.

1 Crowds gathering in Dublin city centre ‘ugly image’ for the capital, say vintners
2 Irish family stuck in Cyprus: ‘We hope our flights home are cancelled’
3 Kanye West says he will run for US president in 2020
4 Fontaines DC: ‘We’ve no licence to speak for Ireland’
5 Vacation once again: A night at a campsite, a five-star hotel and a full-Irish B&B
Real news has value SUBSCRIBE