Una Mullally: Nothing to admire in Healy-Rae’s bluster on climate change 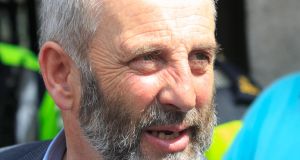 Irish cute hoorism is often applauded in politics. But in Danny Healy-Rae’s case his is devoid of tactical skill, and his particular brand of it – not yet has polished as Michael’s – is stupidity dressed up as self-interest.

At the RDS in Dublin last Thursday night, Naomi Klein asked the sold-out audience, “I was wondering if Danny Healy-Rae made it?… I saw all kinds of people offering him tickets on Twitter.” It is a privilege for Healy-Rae to be mentioned by Klein – one of the great minds of her generation – even if it is as a punchline. Klein was in town for the International Literature Festival Dublin, and spoke mostly about her recent book, This Changes Everything: Capitalism vs the Climate.

Klein repeatedly criticised Irish governments for neglecting and “forgetting” climate change, but also cited several Irish examples that feed into the climate justice movement; the anti-fracking movement in Leitrim, water charges protests, the Shell To Sea protests. She said: “We need to divest from the infrastructure of the past, and invest in the infrastructure of the future.” Klein spoke eloquently about the fact that up until now, the climate justice movement has suffered by being very much against things that were happening, and not necessarily being able to offer up the practicalities of what they are for. That is changing too. She is right in saying that what is happening to our planet is too important to leave to the environmental movement, and that alliances need to be forged everywhere to find solutions to save us from ourselves.

Nobody could be proud of Healy-Rae’s performance in the chamber last week, shouting away to himself while talking absolute nonsense. He might feel like the big man with a platform, sticking the boot into Eamon Ryan – who actually knows what he’s talking about on this issue – but perhaps, in time, Healy-Rae will come to realise that the cartoon version of a rural TD he is selling isn’t in step or tune with those looking on. There was nothing to admire in Healy-Rae’s bluster on climate change, even if you had voted for him and think the Healy-Raes are great value altogether. This was a new low, embarrassing posturing that served no one but wags on Twitter. “If we go back to the 11th and 12th centuries, this country was roasted out of it,” Healy-Rae said, “and in the 13th, the 15th and the 16th centuries we were drowned out of it.” He continued, “I believe that God above is in charge of the weather and that we here can’t do anything about it. Indeed I will say to ye, this last government didn’t do the things they were supposed to do, not to mind, not to mind to regulate or rectify the weather.”

By denying climate change, Healy-Rae is abandoning the interests of the very people he claims (repeatedly) to be representing. Denying climate change is anti-farming, anti-agriculture, anti-rural life, anti-reality. By denying climate change, Healy-Rae is saying that Kerry can go to hell in a hand basket, not to mention the rest of the country, and the world. You have to feel for the constituents of Kerry, especially farmers, who have someone who denies basic science representing them. Above anyone else, it is those who are in touch with the land who understand what is happening. Farmers aren’t part of the problem, they are part of the solution.

Irish cute hoorism is often applauded in politics. But in Healy-Rae’s case his is devoid of tactical skill, and his particular brand of it – not as polished as Michael’s – is stupidity dressed up as self-interest. Danny Healy-Rae is playing to his own stereotype, banking on the idea that nobody wants a change of tune and that if a Healy-Rae started banging a different kind of drum, the rhythm would throw the whole of Kerry off. Doing jigs outside Leinster House is one thing, and painting everyone outside The Kingdom as Gordon Gekkos ready to suck the life out of rural Ireland is another. But speaking as ignorantly as he did is something else altogether.

It’s easy to write off such Healy-Raeisms as colourful eejitry that make for good headlines on Waterford Whispers (although they outdid themselves with their story “Danny Healy-Rae suggests leaving Child of Prague under bush to combat climate change”). We can laugh, but perhaps Healy-Rae isn’t putting this on. Maybe he does indeed not understand the difference between addressing climate change through policy that must be implemented in the aftermath of 2015 United Nations climate change conference, and in his own words a government tasked with “regulating” the weather.

Perhaps he doesn’t understand the difference between “weather” – which is right now, and “climate” – how atmospheric conditions act longterm. Irish governments aren’t in the business of cloud-bursting, but they are required to use policy to address the greatest threat to our planet.

So does Healy-Rae care about the land of the farmers who vote for him? Will he choose prayer over policy when their fields are flooded? Or will he just posture in parliament and shake his fist at the sky? For a man who talks so much about the place he’s from and the people who voted for him, denying the basic science of climate change has catastrophic consequences for his constituents. The people of Kerry deserve someone who understands environmental issues, because they will continue to be hugely impacted by those issues.