Una Mullally: Irish Catholics should not endorse a toxic Church 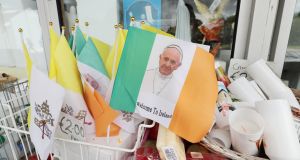 “I truly hate disloyal people.” Eric Trump tweeted, presumably in response to Omarosa Manigault Newman. The former US presidential aide is currently drip feeding damaging – if that term hasn’t lost all meaning when it comes to Donald Trump – and secretly recorded audio in what is one of the greatest promotions in recent history, for her book Unhinged. Loyalty can be a cloudy quality, especially when it comes to people, things or institutions that don’t deserve it. In those cases, it’s loyalty, not disloyalty that compromises you in the end.

Kellyanne Conway, one of Trump’s most senior advisers, has a term for a particular virulent group of loyalists who stand by the president: “the October 8th coalition”. The date refers to those who kept blindly supporting Trump in the wake of the release of an Access Hollywood tape in which the then candidate bragged about sexually assaulting women. That moment, through Conway’s lens, was not a moment for abandonment, but a test of loyalty, a loyalty that was unshakable even knowing and hearing the most grotesque attributes and aspects of the man.

1 Covid-19: Museums, cinemas set to reopen next week as Varadkar warns of New Year restrictions
2 Stir-crazy Dutch holidaymakers set to descend on Caribbean island
3 Bloomberg ranks New Zealand top in fight against Covid-19 - but how did Ireland fare?
4 Alison Curtis: My guilt at not going for a second pregnancy
5 Common disorder increases chances of developing liver cancer – research
6 Opposition withdraw from Dáil business committee as McEntee row deepens
7 How to gift your child a house deposit . . . tax free
8 400 – yes, 400! – Irish retailers for all your online Christmas shopping
9 Tánaiste says third short period of Covid-19 restrictions may be needed in New Year
10 Canary Islands struggle to cope with dramatic surge in migrants
11 BOI customers to be charged twice with bank fees on New Year’s Eve
12 The beginning of the end: 10 things to know about Covid-19 vaccines
13 Fines of up to €500 introduced for breaches of Covid-19 regulations
14 Family in court dispute over hotels in Dublin and Galway
15 Coronavirus: 226 new cases and 6 further deaths reported in the State
16 Irish start-up which developed facial recognition for cows raising over $50m
17 Man sexually assaulted two women in Dublin days after release from jail, court hears
18 Grammys 2021: Fontaines DC get best rock album nomination as Beyoncé leads way
19 Gang moved dealers to other areas when they became known to gardaí, court hears
20 Fintan O’Toole: Our Government should be a fox. It is actually a snake
21 Former barrister jailed for three years for theft
22 The Irish ice-cream maker who was diagnosed with diabetes
23 Brexit: Rush for last-minute deal to let sausages into North
24 Workers have little idea of the cost of retirement income
25 Michelle Gallen and Eavan Boland shortlisted for Costa Book Awards
26 Irish designer of Oxford vaccine: ‘I’ve never worked so hard in my life’
27 Covid-19: Level 5 restrictions likely to be eased in two stages, as planning to roll-out vaccine begins
28 Ryanair warns it may reduce more Irish services and relocate operations
29 Kevin McStay: Maybe a knockout All-Ireland Championship is the long-term solution?
30 Man jailed and fined for not giving evidence in Aaron Brady murder trial
31 Former France and Stade Francais winger Dominici has died aged 48
32 Holly White’s lentil Bolognese: ‘I can’t believe this is vegan’
33 No further players to be called up to Ireland squad to face Georgia
34 Gerry Thornley: Ireland don’t want to box themselves into a corner
35 Irish tax policy is now a human rights issue for the UN
36 Late-night, early morning buses and trains proposed to allow longer shopping days
37 Vitamin D supplement advised for older people
38 Value of gardaí examining RTÉ retirement party queried in Seanad
39 Exiting Level 5: Ministers to push for reopening of shops, restaurants and churches next week
40 Court protection petition for chocolate company prepared ‘in secret’
Real news has value SUBSCRIBE