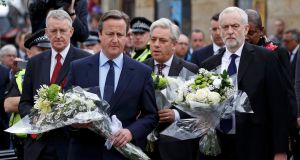 The day before Jo Cox was brutally murdered, I was having a conversation on WhatsApp with a friend about a frequent topic: how divisive public discourse has become.

“You’d think with so much information out there,” I typed, “we’d begin to learn about a broader experience, but we’re all just retreating into smaller spaces with people who think like us.”

The next day my friend messaged me back. “If you give people like Farage what they want, it emboldens the worst people.”

There will always be people who will commit horrific, deranged acts of violence, but even the most outrageous act does not occur in a vacuum. It has a context. Orlando has a context. Jo Cox’s murder has a context. Police officers shooting innocent black men has a context. Sometimes violence appears so grotesque and baffling that we label it “mindless”. It is anything but.

The cruellest of violence is often very mindful of the atmosphere it has been created in. If you fill that atmosphere with hateful language, if you colour rhetoric with disrespect and rage, the actors within that environment, that context, will act accordingly.

For some time now, public discourse has played chicken with decency. As people continue to seal themselves away into echo chambers and filter bubbles or whatever you want to call them, it is increasingly possible to hold extreme points of view and find outlets and people to endorse them.

As traditional media continues to come under serious pressure from new media, as mass media fragments into niches, the reaction from mainstream media has been to participate in this polarisation.

Being reasonable and calm does not a modern columnist make. Being nuanced and thoughtful won’t get you on a television debate. Being open to people’s points of view won’t get you on a radio panel. But more and more, being a controversialist will, being loud will, being dogmatic will. Respect has given way to roaring.

The Brexit Leave campaign and Donald Trump’s ascent have not just scraped the bottom of the barrel of public discourse – they have been inspired by it and, to a certain extent, protected by it.

We see it in the hollering talk radio, the smug and bullish news anchors shouting down opinions that aren’t their own, the recklessly misleading tabloid headlines, the clickbait columns designed not to generate debate but controversy for the sake of reaction, the online trolling and harassment, the comment sections spewing unhinged rants.

Anger is one thing, rage is another. Rage is anger’s unstable relation. Anger feels. Rage retaliates and lashes out.

The atmosphere such discourse creates is a chaotic one. As headlines scream, so do we. We consume this discourse and go to bed seething. We post Facebook rants and get involved in Twitter fights. We fly off the handle about micro-controversies, and send people hate mail. We call people the worst names under the sun. And some people get so angry that it crystallises into rage. And one day they walk out of their house and kill someone.

There is a growing discussion about the parameters of public discourse, yet much of this discussion has been about how wrong people are to be offended. We tell people who are harassed online to toughen up, and scold students for banning offensive speakers in universities. But what about the harassers? They made a choice to harass. What about the speakers with offensive opinions? They are offensive on purpose. What about the words we choose, and the ways we choose to articulate them? Being offended isn’t as big a choice. Being a victim isn’t a choice at all.

So what about decency? What about respect? What about empathy? People scoff about “safe spaces” and “triggering”. But perhaps those things are not about coddling and softness, but rather protection mechanisms in a world where vicious rhetoric now often appears to be the default. The angriest seem to be the most privileged, railing against non-existent infringements, screaming about their rights and positions in a society where they are already top of the food chain.

Cause and effect. You cannot scapegoat people and shrug when they are victims of violence. You cannot absolve yourself of the responsibility for a wildfire by whining “all I did was light a match”.