The Rising reminds us of greatness; a time when political leaders had big ideas 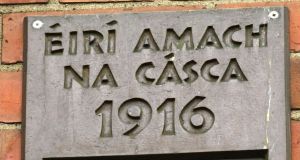 The events that will have the least impact are the ones that people view as the most controversial or divisive, the ones that politicians negotiate over in terms of properness and suitability. Photograph: Frank Miller

Pick your camp. Choose your team. This centenary is going to get divisive. Brothers will be pitted against brothers, mothers against daughters, fathers against sons. It reminds me of something… I can’t quite think of what, probably because according to the next year, Irish history begins, ends and is entirely made up of those six days in April nearly 100 years ago.

Me? I can’t get enough of 1916. For a nation of people who are constantly harping on (sorry) about national identity, we have a strange tendency to disconnect ourselves from it. Our language is ridiculed by many and bitched about as irrelevant, when it’s of essential importance. Our music falls victim to sideswipes about “diddley-eye”, even though traditional Irish music is probably the most famous world music there is.

Our great writers in the English language are strangely absent from our school curriculum, as we defer instead to British ones. We are everywhere, and identify as Irish generations after leaving the place. Yet still, for a cultural identity so omnipresent, many Irish people feign involvement in it through superficial posturing. We celebrate Irishness as an abstract, preferring the stereotype to the substance.

Because we rarely get a chance to reflect on and celebrate our identity – outside of the sporting arena, or when an English newspaper calls one of our actor’s British – what’s exciting about the centenary celebrations is that it allows us just that. A nation of navel-gazers finally has permission to indulge ourselves on our favourite subject: us.

The programme for the centenary has seven categories; State Ceremonial, Historical Reflection, Cultural Expression, Community Participation, Global and Diaspora, An Teanga Beo, and Youth and Imagination. Seven is the magic number in 2016. Seven signatories. Seven celebration categories. What feels like seven years of John Bruton talking about Home Rule.

The events that will work in 1916 are the cultural ones, the ones that showcase our artistic talent, the ones with music, the ones that tingle our skin as their poetry and lyrics and melodies activate those proud sleeper cells in our DNA. People might think it’s fashionable to roll their eyes about the centenary year, but one drop of that good stuff and they’ll be clutching the crests of their jerseys.

I predict that the events that will have the least impact are the ones that people view as the most controversial or divisive, the ones that politicians negotiate over in terms of properness and suitability and protocol and decorum. But what also won’t work is trying to please everyone either.

Maybe the most valid reason to get on board with the 1916 celebrations is recognising how special the big ideas that surrounded it were. Our modern political culture is largely devoid of big ideas and is aspiration-anaemic. The Rising reminds us that political leaders once upon a time strived for greatness, whereas today they reach for mediocrity.

It reminds us that things were different back then, that the aspirations were advanced and sophisticated, whereas today they’re mostly small and rudimentary. The marriage referendum last year remains the one good thing the country has done in years. A big idea. A celebration of The Rising a year early. And that, it’s also worth remembering, was led by the people not the politicians.

The Rising was a golden moment, and when we lost many of its thinkers, we lost a lot of its thinking. For most of the 20th century, Ireland was a theocracy wrapped in a republic’s robes, a situation we still haven’t managed to fully reverse. Reminding ourselves of that once upon a time moment might allow us to imagine a new happily ever after.