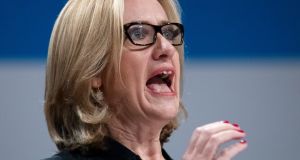 Being Irish in Britain is pretty easy. We look the same, we speak the same language, we share jokes and football teams. We are even, in accordance with the Ireland Act 1949, “non-foreign” in the eyes of British law. And yet, I woke yesterday morning and, for the first time since I arrived in the UK more than a decade ago, I thought: “I am not welcome here.”

On the radio in my Glasgow kitchen, Conservative minister Amber Rudd was being interviewed on BBC Radio Four’s Today programme. The home secretary was outlining a proposed policy that would see companies forced to publish lists of non-British staff in their employ.

The government, Rudd said, wanted to “flush out” firms that were employing too many foreign workers.

I loved Britain and its politics, because its leaders never said things like that. Sure the place has its faults. There are the reserve and the weather and the feeling, sometimes, that it is too much like home but not quite similar enough.

But temperance and tolerance – particularly in public discourse – were never an issue. They are now.

“It is increasingly uncomfortable living and working in the UK,” an Irish friend working in London wrote on social media. She is far from alone.

While many at home in Ireland and elsewhere have watched agog as Donald Trump made race a central feature of next month’s US presidential election, a similar process has been at play in the UK.

Where British politicians once thought twice or three times about scapegoating, they now do so with happy abandon.

At the Tory party conference this week, UK prime minister Theresa May said foreign doctors would have to leave the UK once enough home-grown replacements had been trained. Even Enoch Powell, the notorious racist and one-time South Down MP, said health service workers “are not and never have been immigrants.”

When, a few days before the vote, Ukip leader Nigel Farage stood grinning in front of a poster entitled “Breaking Point”, voters across the UK nodded in agreement. Few knew that the image of refugees queuing at the border was taken in Croatia, even fewer cared.

“Where are you from?” a young woman demanded of me when I was reporting from Sunderland for this newspaper in the run-up to Brexit. Afterwards I asked her why she was voting to leave the EU.

“Because of the immigrants.” Less than 3 per cent of the city is from an ethnic minority background. “Yeah, but we don’t want them to come and ruin here. I have seen what they do on TV.”

The British media certainly has a lot to answer for. The right-wing press has successfully convinced the nation that produced the Enlightenment – where reason trumped emotion – that there be dragons beyond the white cliffs of Dover.

The European Union, those faceless bureaucrats, have been blamed for banning misshapen vegetables, creating reams of red tape, and, most importantly, “flooding” Britain with foreigners.

Rather than calm the fears of an overexcited populace, UK politicians have fanned the flames. In 2007, then newly crowned Labour prime minister Gordon Brown said he wanted “British jobs for British workers”. This week we have seen the logical conclusion of this sentiment.

The Conservative programme for government is essentially National Front-style populism: state intervention for “us”, razor wire for “them”. No more tolerance for those politicians who do not pander to “patriotic working-class voters”, code for those who start sentences with, “I’m not a racist but . . . ”

Of course, this may all be political bluster, hardline language to appeal to the base of the Tory party. But words have real-world effects, as this summer has shown.

This morning my life in Britain looks much the same as it did yesterday. I still greet my elderly neighbour in the stairwell. I still chat to the Pakistani man in my local post office. But how I feel about the country I live in has changed.

Where once I was “non-foreign” in the most commodious sense, I now feel that I might need this legal jargon some day to protect my job or my right to stay here. By which time, I and thousands like me will probably have left.