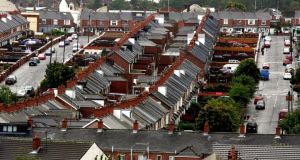 ‘The Housing Executive can be seen as the most solid single achievement of the early civil rights movement. It is now at imminent risk.’ Photograph: David Sleator

The Stormont House Agreement published on December 23rd commits the Northern Executive to discarding thousands of public sector jobs and privatising a range of public assets.

The talks which led to the agreement were launched last October. Then, it was widely assumed that the prime if not the only purpose was to deal with issues left over from the talks chaired by Richard Haass which had ended in December 2013 – flags, parades and the past.

However, the issues that came to dominate discussions were finance and welfare reform, and it is on these that a measure of agreement was reached. There has been no meeting of minds on flags, parades or the past. Instead, again, an array of new institutions is to be brought into being.

A 15-strong Commission on Flags, Identity, Culture and Tradition will be set up by June and will publish a report and recommendations by the end of 2016, at which point debate on the wisdom of what’s suggested will begin to rage.

Among measures designed to soften antagonisms over the past will be an Oral History Archive “for people from all backgrounds to share experiences and narratives related to the Troubles”. Legislation will be introduced to establish a Historical Investigations Unit to take over police and other inquiries into outstanding Troubles-related deaths. An Independent Commission on Information Retrieval will be set up by the UK and Irish governments “to enable victims and survivors to seek and privately receive information about the deaths of their next of kin”. And an Implementation and Reconciliation Group will “oversee themes, archives and information recovery” and, after five years, commission “independent academic experts” to produce a “report on themes”.

It’s impossible to say whether all or any of this will work. What’s certain is that there’s work here for years ahead, and continuing opportunity to remind critics to be careful lest they endanger peace. The most contentious aspects of what’s been agreed on finance and welfare, on the other hand, will come into effect in a matter of weeks, and there’s no confusion about the impact they’ll have.

Legislation to extend to the North welfare cuts already in place in Britain is to be brought to the Assembly before the end of this month and fully implemented by the end of the 2016-17 financial year. True, the local parties won a number of concessions. The “bedroom tax” – a cut in housing benefit to families which an arbitrary formula dictates have more bedrooms than they need – will apply in the North only to new tenants. Benefits will continue to be available fortnightly, not paid only on a monthly basis. These and other provisions will greatly be welcomed by thousands directly affected. But the bulk of the Tory benefit cuts have been accepted.

The agreement requires all Stormont departments to consider “how best to realise the value of their capital assets . . . to realise income and longer-term savings”. That is, to sell off public facilities to fund current and future spending. The assets in question include Belfast Harbour Estate, Northern Ireland Rail, Ulsterbus, NI Water, Donaghadee harbour, forests, office buildings, etc, all set soon to appear on an auction manifest.

Corporation tax may be reduced from the British 21 per cent rate to the 12.5 per cent notionally in force in the South. However, the revenue loss to the treasury would have to be matched by further cuts to public spending. In effect, money transferred from the bottom of society to the top.

It is to be doubted whether parties which had fervently pledged to “fight the Tory cuts” could have gotten away with acceptance of this package had it not come gift-wrapped in a process which just keeps on giving.