While international outfits benefit from our crew and acting talent, homegrown TV drama has yet to translate to an international audience 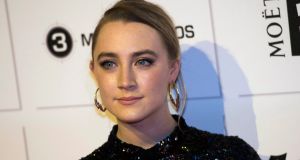 Saoirse Ronan arrives for the British Independent Film Awards in December. “In terms of acting talent, it’s almost ridiculous the extent to which Irish male and female actors punch above their weight internationally.” Photograph: Will Oliver

Before the Oscar nominations are revealed this week, it is impossible not to assume multiple nominations for the Irish. When that happens, you have to imagine a lot of people in the industry internationally will wonder what on earth is going on in Ireland.

The answer is it. It is going on. Twenty years after Neil Jordan’s Michael Collins, Irish film is increasingly expanding beyond the tropes we came to expect from it. We are moving from an inward-looking industry to an outward-looking one.

While everyone is talking about Room and Brooklyn, there is another emerging gem that perhaps best represents a new era of outward-looking Irish film. The Spanish-language Viva, directed by Paddy Breathnach and written by Mark O’Halloran, is set in Cuba, It made the Oscar shortlist of nine titles to be nominated for Best Foreign Language Film. That list will be whittled down to five and there is no reason why Viva shouldn’t be on it.

In Cartoon Saloon, we have a world-class animation studio whose stunning Song of the Sea was nominated for an Oscar in 2015, five years after its The Secret of Kells was also nominated.

Later this month, seven Irish titles will screen at the prestigious Sundance Film Festival, including six features: Sing Street, Love & Friendship, Viva, The Lobster, Mammal and the documentary The Land of the Enlightened. An animated short, A Coat Made Dark, makes seven.

How did this happen? There is certainly an element of the stars aligning for a new generation of film-makers. In terms of acting talent, it’s almost ridiculous the extent to which the Irish punch above their weight internationally. Our A list keeps getting longer.

But this cool era of Irish film also has to do with production infrastructure. Element Pictures has gone from small-budget Irish films to bigger things – Room, Frank, The Lobster, Glassland. Another production company, Blinder Films, is also excelling. Its roster includes The Pervert’s Guide to Ideology and the acclaimed documentary on Panti Bliss, The Queen of Ireland. Blinder most recently produced Love and Friendship, staring Kate Beckinsale and Chloë Sevigny, and Blinder’s Katie Holly is producing an upcoming feature documentary on the singer and icon Grace Jones.

The section 481 tax credit, which incentivises film and television production here, means a production company can claim a payable tax credit of up to 32 per cent on expenditure related to cast and crew working in Ireland, post-production, and other expenses. Amazon Prime’s Ripper Street, HBO’s Game of Thrones, the History Channel’s Vikings, and Showtime/Sky Atlantic’s Penny Dreadful all shoot in Ireland.

When big series shoot here, the productions become a training and a breeding ground for Irish crews. So when those shows wrap, you end up with better cinematographers, better hair and make-up artists, better set designers and builders, better camera crews, better sparks and a better overall infrastructure to provide facilities for big productions.

Curiously, the boom in the Irish film industry has yet to be a boon to Irish television. While international outfits benefit from our crew and acting talent, homegrown drama has yet to translate to an international audience. Most of the hit international television dramas are US and British productions. (Denmark is the obvious exception – Borgen, The Killing and the Swedish co-production The Bridge are all international hits.)

Historically, what you could call “Irish” television successes became so elsewhere, from Father Ted to Sharon Horgan’s brilliant Catastrophe. While the Irish Film Board’s remit has traditionally been film, the lines between the mediums are increasingly blurred. Big name film directors, writers, producers and actors have migrated to television.

Ireland needs to get in on the action of this golden era. If we can make world-class Irish films with Irish stories, Irish directors, writers, producers and actors, then why not television?

Morgan O’Sullivan at Ardmore Studios has been a trailblazer for Irish-made television productions, including The Tudors, Vikings and Penny Dreadful.

RTÉ’s Rebellion, produced by Touchpaper and Zodiak with SundanceTV, is a good sign of looking beyond a local audience in terms of co-productions, but an Irish TV hit remain elusive internationally, especially contemporary dramas.

As we toast our big-screen triumphs with awards and recognition, it would be great to see our industry, its funding mechanisms and production infrastructure focus on the small screen as well.

1 Covid-19: Hairdressers, gyms and religious services could return next week
2 Bloomberg ranks New Zealand top in fight against Covid-19 - but how did Ireland fare?
3 How to gift your child a house deposit . . . tax free
4 Q&A: When will we know more about plans to exit Level 5?
5 The beginning of the end: 10 things to know about Covid-19 vaccines
Real news has value SUBSCRIBE