This is our Bloody Sunday. Help stop the Gaza shootings 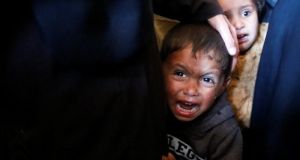 Gaza death: a boy cries during the funeral of Tahreer Wahba, a 17-year-old Palestinian shot during a border protest. Photograph: Suhaib Salem/Reuters

The use of military force to enforce an imposed regime is typical of colonialism. Israel adamantly rejects being deemed a colonial power in the Palestinian territories. Yet reality shows, time and again, that the government of Israel cannot claim to have a morally acceptable vision of the future if it continues using violence against unarmed citizens.

Shooting into a crowd of demonstrators who pose no danger to Israeli citizens or soldiers might prove to be a war crime. It is the duty of the international community, especially European Union member states, to intervene. Such use of live ammunition must be forbidden against future demonstrations.

Nearly a century has gone by since soldiers of the British Indian army opened fire at an unarmed, nonviolent crowd of pilgrims, gathering in a public garden in Amritsar, in Punjab. The crime of the 379 dead and hundreds of wounded was the mere fact that they assembled, in defiance of government decrees. The incident rattled India and Britain. Some historians claim that this point in time, namely April 13th, 1919, was when Britain began to lose its grip on India and, ultimately, its entire empire.

Snipers received orders to shoot live ammunition at demonstrators, in some cases even to shoot to kill. The soldiers were not defending themselves.

Almost 60 years have passed since police forces in disarray fired into a mass of nonviolent demonstrators in Sharpeville, in South Africa. The demonstration was part of a large campaign headed by the ANC (and by its rival, the PAC) against the pass laws, a set of rules, imposed by the apartheid authorities, severely restricting the freedom of movement of most African citizens. The police shot 69 people dead and severely wounded 180 others. That day, March 19th, 1960, was the beginning of the end of the apartheid regime, dismantled 34 years later, when free elections were first held.

On Sunday, January 30th, 1972, British forces opened fire on unarmed demonstrators in Derry. Thirteen people were killed on the spot, and another died a few days later from his wounds, in what would later be known as Bloody Sunday. Many years passed before the Saville inquiry determined that opening fire at demonstrators was unjustified and unjustifiable. The seeds of the Belfast Agreement were planted the day British soldiers shot at unarmed, nonviolent civilians.

On Friday, March 30th, civil-society organisations in Gaza initiated a new course of action: nonviolent protest. Tens of thousands of demonstrators have been assembling each Friday after prayer, at protest centres located along the border fence dividing the Gaza Strip from the sovereign territory of Israel. They will do so again tomorrow.

The Israel Defense Forces were prepared for the demonstrations. Snipers received orders to shoot live ammunition at demonstrators, in some cases even to “shoot to kill”. The soldiers were not defending themselves. Nobody was endangered – neither Israeli citizens nor the soldiers. Fire was opened to deter citizens from approaching the fence separating Gaza from Israel.

Israel’s nightmare is that masses of Palestinians cross the fence and sweep into Israel. The Israel Defense Forces would have no response to that. On the other hand the lives of Palestinians in Gaza are becoming meaningless to many in Israel, for which history will surely judge us. An independent international inquiry must be established to transparently investigate incidents in which live ammunition was fired at unarmed demonstrators.

Yet where is the international community? Why do the protests seem so half-hearted? Why aren’t diplomatic means being used to deter Israel from such direct and brutal violence towards unarmed nonviolent Palestinian demonstrators? Could the European Union and its members, including Ireland, believe that this isn’t the time for a stern rebuke of Israel, as the situation in Syria is boiling to a point of conflict between the superpowers?

These countries might not be pleased with Israel’s conduct but seem to prefer the profitable economic co-operation between Israel and EU member states. Is Ireland, too, among the states that hope the demonstrations will just dissipate, saving them the trouble of a sharp diplomatic rebuke?

What scares Israel about these nonviolent demonstrations in Gaza? The possibility that this form of popular protest will spill over to the West Bank and East Jerusalem, leaving the authorities helpless. Firing live ammunition at nonviolent, unarmed demonstrators is an act of inconceivable brutality, yet standing indifferently on the sidelines is inconceivable, too.