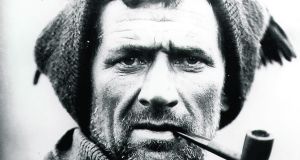 The Easter Rising was not the only historic event launched by Irishmen on April 24th, 1916. There was at least one other notable exploit begun that day, several thousand miles from Dublin.

And in fact the overused word “launch” was more appropriate to it, because it involved a boat.

The voyage of the James Caird, as it became known, took place in what had previously been a mere lifeboat – one of the three on Ernest Shackleton’s doomed ship Endurance, by then abandoned to the Antarctic ice, along with the mission of those who had sailed in her.

Their goal now was mere survival, which required the toughest crew members to make a perilous crossing of the world’s most inhospitable waters, in polar winter, and seek help from the whaling stations of South Georgia.

It is all too tempting to treat the 17 days of “supreme strife” that followed as a metaphor for events back in the homeland of Tom Crean (born in Kerry) Tim McCarthy (Cork), and the expedition leader Shackleton (Kildare, although a Londoner from childhood).

But suffice it to say that by the time they hit land again, on May 10th, the authorities in Dublin were still at sea, and floundering.

Most of the rebel leaders had already been executed – only two remained to face to firing squads.

And before Shackleton, Crean, and the New Zealander Frank Worsley completed their epic mission with a pioneering trek across South Georgia’s interior, James Connolly and Seán MacDiarmada had joined the pantheon of martyrs.

Whatever about its crew, the James Caird itself was a symbol for revolutionary times. Promoted above its station by extreme events, it had been refitted by the ship’s carpenter, Harry McNish, who like Connolly, was both a Scotsman and socialist.

It’s said that Shackleton chose to bring him to South Georgia not so much because of any qualities he would add en route as because of fears he might cause trouble if left behind with the rest of the main crew on Elephant Island.

But as for the Irishmen who sailed in McNish’s improvised vessel, none were obvious sympathisers with the rebellion. Like the rest of the Endurance crew, Kinsale-born McCarthy had sailed from Plymouth in August 1914, just as the war in Europe began.  When he returned home, he promptly joined the Royal Navy and was dead within a year of the Caird voyage, sunk by a German torpedo on the eve of St Patrick’s Day in 1917.

Shackleton also volunteered for military service, although too old, of failing health, and drinking heavily.

He survived the war, but after it continued to court glory and danger, until he died of a heart attack, back on South Georgia, in 1922.

The politics of Tom Crean, if any, are a matter of conjecture, because he never talked about them, or about much else. This despite a post-navy career – as a pub-owner in his native Annascaul – that offered endless opportunities for regaling customers with his heroics.

He was by all accounts a very modest man, and his silence may have stemmed from the same stoicism with which he faced mountainous seas and Antarctic blizzards.

But in 1920s Kerry, silence about past service – even indirect – to the empire was probably judicious. For even if his far-away heroics were uncontentious, there were other sensitivities nearer home.

At the time Crean was taking to sea in the James Caird, 100 years ago this weekend, his older brother Cornelius was also facing a new, more dangerous phase of life. He was an RIC sergeant, in west Cork, where the waters were about to get very choppy for members of the security forces.

When Tom Crean retired from the navy, in March 1920, Cornelius was still safely patrolling the roads around Bandon, but not for long. One evening, a month later, he and two other policemen were investigating an incident near Upton, when they were ambushed by the IRA.

According to the sole survivor, Crean first tried to run for cover, then turned to fire on his attackers. He was found later sitting with his back to a wall, but fatally wounded.  It was April 25th, 1920 – four years and a day since the simultaneous launch of the Rising and the James Caird.

1 Bank leaked my loan request to family who tried to rip me off
2 Why Sinn Féin will not call the State by its name
3 What evidence is there that the IRA still controls Sinn Féin?
4 Spread of coronavirus triggers European travel curbs
5 Brazilian father to be deported days after daughter’s birthday
Real news has value SUBSCRIBE