The Westminster attack is a tragedy, but it’s not a threat to democracy

The terrorists’ aim is not just to kill a few but to terrify a multitude. For politicians and media to overreact would play into their hands 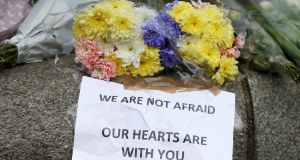 Flowers and messages are left near the scene of an attack by a man driving a car and weilding a knife left five people dead and dozens injured, in London. REUTERS/Neil Hall

The current bout of global terrorism came to the heart of London today in a fatal attack outside the Palace of Westminster. The symbolism is impossible to escape. An assault on the home of democracy induces a peculiar sense of outrage. That people, including a policeman, should die in such an assault is tragic.

As yet, nothing is known of the motive. All that can be said is that the attacker failed to enter parliament itself. Bystanders were killed and injured, but the massive security inevitable for such an institution was effective in protecting its occupants. In a busy modern city there is no way absolute security can be assured, but the police can say that the system was tested and worked. Short of holding parliament in a bunker, there are limits to what more can or should sensibly be done.

Parliament will have been subjected to this test because of its high profile. The initial purpose of such incidents is to kill and wreak havoc. But the culprit cannot have sought simply to damage a wall or cause death and injury. We can assume he anticipated massive publicity for his deed – and thus for his message. His purpose may well have been to spread fear, to test the robustness of democracy and, if possible, make it change its behaviour.

Our response to these incidents must not be to overreact. This week is the anniversary of the Islamic State outrage at Brussels airport , when 32 people lost their lives in a coordinated assault on Belgium’s transport system. It followed earlier attacks in Paris.

The reaction then was extraordinary. Europe’s media and politicians were close to hysterical. For days, BBC reporters on the spot repeated the words panic, threat and menace by the hour. France’s President François Hollande declared that “ all of Europe has been attacked ”. Prime minister David Cameron announced that “ the UK faces a very real terror threat ”. Donald Trump declared to cheering supporters that “ Belgium and France are literally disintegrating ”. Isis could not have asked for a greater megaphone.

The terrorist is helpless without the assistance of the media and those who feed it with words and deeds. In his thoughtful manual, Terrorism: How to Respond, academic Richard English points out that the so-called threat to democracy, about which politicians like to talk at such times, lies not in any bloodshed and damage. It is the more real danger “of provoking ill-judged, extravagant and counterproductive state responses”. But this puts those who choose to be “provoked” in a peculiar and compromising position. Only if the media respond in a certain way can the terrorists achieve whatever spurious ends they may have.

We should recall that Theresa May as home secretary used the Paris and Belgium attacks to champion her “ snooper’s charter ”, the most severe intrusion on personal privacy anywhere in the western world – and described as such by Bill Binney, formerly of America’s National Security Agency. May added that the “terrorist threat” was why we should stay in the EU, as otherwise “they would roam free”. She warned that it took 143 days to process terrorist DNA outside the EU, against 15 minutes inside. Does she still say that? We have to respect those who defend us, but terrorism induces a strange madness.

At the time, the British government also rushed ahead with its Prevent strategy, commanding every educational institution to show it had programmes in place “to counter nonviolent extremism, which can create an atmosphere conducive to terrorism”. The attendant bureaucracy is now massive. Hardly a week passes without the Metropolitan police demanding vigilance – inducing fear, caution and nervousness towards strangers. A recent BBC “drama documentary” titled Attack was ill-concealed publicity for more money for the police.

In struggling to put these incidents into proportion, we need to remember that there are now huge amounts of money in counterterrorism. Now is not the time to say this money is disproportionate, but it is open to the charge of serving terror’s purposes. Everyone involved has, in truth, a sort of interest in it, from journalists and politicians to police and security lobbyists. The paucity of terror incidents in totalitarian countries that censor news shows the crucial role of publicity to terror’s methodology. That said, suppressing such news cannot be justified in a free society. There is even a reluctance to admit self-censorship. When last year the French newspaper Le Monde decided not to publish the names of those responsible for terrorist killings as it clearly aided their martyrdom, it was criticised for denying coverage.

But every decision to publish an item of news involves a choice, a judgment. That is not “censorship”. For those seeking publicity for their misdeeds, there is a world of difference between the top spot on the news and the bottom. If the intention is not just to kill a few but thereby to terrify a multitude, the media is an essential accomplice. It is not the act that spreads terror, it is the report, the broadcast, the edited presentation, the decision on prominence.

All analysts of terrorism reiterate that it is not an ideology. Guns and bombs pose no “existential” threat to a country or society. Politicians who exploit it to engender fear are cynics with vested interests. Terrorism is a methodology of conflict. There is no real defence against madmen who kill, though it’s worth restating that London’s streets have probably never been safer places.

The use of vehicles to convey death is as old as the motor car – or at least since Mario Buda exploded his car bomb in Wall Street in 1920. Recent advances in electronics have clearly taken this a step further, hence the new horror of laptops on board aeroplanes. But planes are safer vehicles than ever.

That is why the response of British governments to IRA incidents in the 1970s and 80s – to regard them as random crimes not quasi-political gestures – was surely correct. IRA terrorism was a much worse threat than anything experienced at present. Some freedoms were curtailed, as in detention without trial and the censoring of IRA spokespeople. They were minor victories for terror. But for the most part, British freedoms were not infringed, life went on and the threat eventually passed. Let us hope the same applies today.

1 Pricewatch: Left on the shelf - what we are no longer buying
2 Coronavirus: Numbers receiving pandemic payment falls as thousands return to work
3 Unidentified man has been in Irish psychiatric hospital for 30 years
4 Prof Luke O’Neill: ‘It’s definitely beatable, Covid-19’
5 Coronavirus: What will reopen in Ireland’s phases to ease restrictions and what are the dates?
Real news has value SUBSCRIBE