The politics of potatoes

How Marks & Spencer’s vegetable department is digging up the past 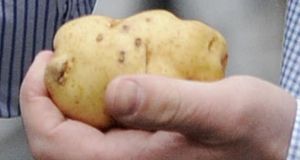 ‘Apart from the novelty factor, the new Lumper’s marketers seem to be depending on its cross-community appeal.’ Photograph: Dave Meehan

It felt all wrong, to be honest. But earlier this week, I paid a visit to the up-market food department of Marks & Spencer in Dublin’s Grafton Street, to buy a bag of Famine potatoes.

Sure enough, there they were among all the other daintily-presented vegetables: squeezed into tiny, one-kilo bags with the stamp our “latest discovery”. They were of course washed. And only by their unglamorous name – Lumper – and by the knobbly appearance that inspired it might an 1840s peasant have recognised them.

I noticed too, in passing, that the Lumpers were displayed alongside another potato variety called “Saxon”. Naturally, the Saxons were smoother-skinned and more regular in shape, which made the juxtaposition by a British supermarket chain almost provocative. Even so, I bought a bag of those as well.

Not that, all joking aside, there is or ever was anything intrinsically Irish about Lumpers. Even by potato standards, they were recent arrivals here at the time of the Famine, having first appeared here around 1810.

But their prolific growing powers, regardless of soil quality, made them rapidly popular. So from the south-west, where the earliest crops were sown, they spread north to Connacht and across the Shannon into Leinster. Only the east and Ulster were unconquered by the 1840s. About a third of the population was completely dependent on them when disaster struck.

During the comparatively minor catastrophe with which modern Ireland has been struggling lately, overseas commentators have often succumbed to the temptation to draw analogies with the Famine.

One of the more overwrought theories I’ve seen was a suggestion that the Irish might be innately vulnerable to monocultures: that just as so many people had lumped on the Lumper once, so did early-21st century Ireland decide that property was the only crop worth growing.

But a somewhat forgotten aspect of the Famine – I read about this while waiting for the potatoes to boil – is that it also led, indirectly, to a banking collapse: the worst in Britain until recent times.

It came to pass because, after the Famine-impelled repeal of the Corn Laws, which was supposed to allow cheap grain imports, prices went up instead of down. Then so many grain merchants gambled on their continuing rise that, when it didn’t happen, companies went bust and took banks with them.

It’s ironic that the Lumper’s re-entry into the Irish market after a 170-year gap should come from the north-east – Antrim, specifically – the part of Ireland that most resisted its homely charm first time round. In any case, it’s unlikely to achieve anything approaching its former dominance on this occasion.

Apart from the novelty factor, the new Lumper’s marketers seem to be depending on its cross-community appeal. That's to say the belief that it can unite those usually-irreconcilable strands of Irish opinion, potato-wise: those who like flour and those who prefer wax. I suspect this divide is a largely urban-rural one. Most Dubliners I know seem to prefer waxy spuds, whereas country-born people tend the other way.

It’s no secret, as long-time readers of this column will be aware, that I'm a floury man: almost militantly so. I will go to great lengths to find Golden Wonders, the non-pareil of floury varieties. And I cross the street to avoid those ghastly soap-balls that so many restaurants now serve under the sentimental description of “baby potatoes”.

I am not, however, a complete bigot on the issue. So it would be nice to think that the new Lumper might be a root-vegetable equivalent of the Alliance Party, uniting both sides of potato-eating Ireland in a common cause. Which – heavily paraphrased – seems to be the growers’ claim.

But I regret to say that, based on my experience, there’s a bit too much wax in the Lumpers agenda to make it acceptable as a genuine cross-community initiative. At best, it’s only a basis for talks (for which, of course, I remain available).

I don’t know what I expected from it, mind you. By all accounts, the reinvented Lumper tastes a lot better than it did the first time: even with the survivor’s guilt that is now inevitably part of the flavour. But it carries an awful lot of baggage for a vegetable. And no matter what the growers did with it, it was almost bound to be disappointing.

I tried the Saxons too, by the way. Which are, if anything, even waxier. I also found them slightly oppressive on the palate. But that was probably just the lingering effects of post-colonialism.