The Mary Robinson Centre is no vanity project 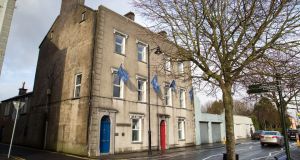 The Mary Robinson Centre in the former president’s home town of Ballina, Co Mayo, is no vanity project as some, including UCD history professor Diarmaid Ferriter, have suggested.

The truth is the idea for the archive and the centre being in Mayo originated, as did the Robinson presidency, with the grassroots. The genesis of the idea came from the community in Robinson’s home town of Ballina. The west coast town has considerable pride in her outstanding career and on-going global leadership and sees the proposed centre as a living institution which will focus global attention and, working in collaboration with the National University of Ireland Galway, will continue the conversation on topics of fundamental importance.

The idea was first mooted by the then Ballina Town Council as far back as 2008. In partnership with local community and business interests they approached Nick and Mary Robinson to discuss the idea of a centre which would tell the story of a remarkable Irish woman and would also provide an innovative addition to the visitor attractions in Co Mayo.

Robinson was initially extremely sceptical saying she neither needed nor wanted her archive to be accommodated “in some form of mausoleum” and it took several years of gentle and consistent persuasion to convince her to take the risk involved in breaking with the tradition of presidents donating their papers to conventional institutions such as the National Library, the National Archives or one of the national universities (and as called for by Prof Ferriter).

The idea that the experience and value of her archive isn’t enhanced by this geographical context is short-sighted. It also fuels the prejudice that all national development has to be in the Pale. Ballina is very accessible by road, rail and bus and is served by an international airport nearby.

The Mary Robinson Centre too has established connections with NUIG and it was Robinson’s work with the International School of Human Rights at the Galway university which brought Dr Jim Browne into the discussion on the centre. His leadership was key to the academic partnership which is at the core of this project. The work of persuading the current owner of the family home to move and sell the property was the final element which allowed the project to be formally initiated and the support of the Ireland Funds, which has led the charge on international fundraising, has made it possible to get the project to the point where lectures, public events and the education programme are already under way and the construction element will shortly go to tender.

The reality is that the Mary Robinson Centre will be Ireland’s first presidential library – and the world’s first such library dedicated to a female president. It is being developed in partnership with Mayo County Council and the National University of Ireland Galway to preserve and provide public access to Mary Robinson’s legacy as a politician, as a transformative Irish president and as a global champion for human rights, gender equality and climate justice.

The Mary Robinson Centre has been active since 2014, holding a wide range of events, exhibitions and academic activities in Ireland and abroad including three international human rights lectures welcoming to Ballina globally renowned speakers such as Nobel Laureate, Prof Muhammad Yunus and Mary Robinson’s fellow Elders, Hina Jilani and Graça Machel, widow of Nelson Mandela – this lecture was attended by more than 900 people. There have also been two international symposiums – the first in NUI Galway on women’s empowerment in Africa and the second, in July 2016 in Ballina, on sustainable development goals, which was attended by 150 people.

Ferriter is right in one point in his article that Mary Robinson’s legacy stands tall in the world and does not need any memorial. But this world certainly needs a centre as envisioned to give leadership in troubled times and Ballina and Mayo are proud to host it. He can experience the centre himself next year if he accepts our invitation to attend the Fourth Mary Robinson Human Rights Lecture in Ballina which will be given by former US senator George Mitchell.

1 Coronavirus: Non-essential travel from US set to be banned within days
2 Are we really facing the death of the office?
3 Google to roll out software fix to remedy issue with Covid app
4 ‘Our hearts are broken’ – implications of fresh lockdown sink in
5 Portlaoise locked down: ‘Our older clientele haven’t been back’
Real news has value SUBSCRIBE