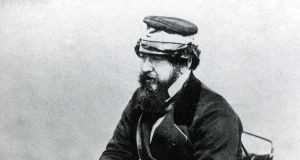 His epitaph in the crypt of St Paul’s Cathedral in London states: “The first and greatest war correspondent”. And while William Howard Russell, an Irish reporter with the Times of London, may not have been the first of the modern war correspondents, he is regarded as a father-figure, breaking new ground with his graphic reporting of conflicts spanning the Victorian era.

Born 200 years ago on March 28, 1820, in Jobstown (also known as Lily Vale) in Dublin’s Tallaght, he was the son of John Russell, whom he described as a “large-limbed, solid, joyous man”.

Shortly after his birth, his father’s business collapsed and his parents left for Liverpool, leaving their son in the care of his grandfather, Jack Kelly, known as “Captain Jack”, master of the Tallaght Foxhounds.

The young boy’s earliest memory was of horses and hunting: “There were hounds all over the place and men on horseback galloping, blowing horns, cracking whips, tallyho-ing, yoicksing and general uproar”.

Russell was educated at Dr Wall’s in Hume Street, Dublin, where according to one report, he was flogged with “distressing frequency”, but moved to Dr Geoghegan’s where he spent a happier time. Attracted by military life, he enjoyed watching soldiers drilling and tried to enlist, although his grandfather prevented him. Instead, he and a friend joined battle with boys from other schools, later writing “Black eyes were as plentiful as blackberries, and I had my share”.

He read for his entrance examination at Trinity College but fights continued among the undergraduates and he failed to obtain a scholarship. Fate intervened when a cousin who worked for the Times engaged Russell as a reporter for the forthcoming Irish elections. He impressed the editor and was offered a job in London. In 1843 he was sent back to Ireland to write about Daniel O’Connell’s “monster” rallies as part of the repeal campaign. But his work did not please O’Connell and on one occasion he referred to Russell as “a liar”.

Over a hectic 30-year period he covered wars and rebellions, and during the Crimean War wrote about the infamous Charge of the Light Brigade. This failed military action – the result of a misinterpreted order – claimed the lives of more than 100 cavalrymen, some of them Irish, who galloped into the Russian artillery guns at the Battle of Balaclava in October 1854. Although he saw little of the first-hand fighting, Russell was skilful at interviewing, and from soldiers obtained exclusive stories exposing their sufferings. With his inkpot and caustic quill pen, he described being appalled at the casualties and the bungling of the war, criticising the British commander Lord Raglan for incompetence.

Queen Victoria was displeased with the Times’s attacks on Raglan, while Prince Albert called Russell “that miserable scribbler”. A former secretary for war, Sidney Herbert, stated, “I trust the Army will lynch The Times correspondent”.

Russell survived these personal attacks and was soon on the move, heading east again to cover the Indian Mutiny which erupted in 1856. He saw considerable action, and as well as being wounded, suffered the added discomfort of mosquitos at night. The rebellion, against the rule of the British East India Company, was suppressed by brutal methods, including the indiscriminate execution of prisoners.

In March 1861, he sailed west from Cork on the steamship Arabia to report on the American Civil War and the First Battle of Bull Run, named after a stream southwest of Washington.

By now a celebrity, Russell found doors opening for him and was introduced to the newly elected President Abraham Lincoln at the State Department. Lincoln greeted him in a friendly manner saying: “I am very glad to make your acquaintance, and to see you in this country. The London Times is one of the greatest powers in the world; in fact, I don’t know anything which has more power, except perhaps the Mississippi. ”

Russell later sent dispatches from the Franco-Prussian War (1870-71) and was present at the Battle of Sedan, which resulted in the capture of Emperor Napoleon III, and the Fall of Paris. At his final campaign in 1879 he reported for the Daily Telegraph on the Zulu War in South Africa. A prolific writer, he published numerous books, including four diaries in which he recorded unique glimpses of the conflicts he witnessed.

By any standards, from the fertile fields of Tallaght to the battlefields of Europe, Asia, America and South Africa, he had a glittering career. Known to Thackeray and Dickens as “Billy”, the name William Howard Russell is synonymous in the annals of famed war correspondents.

His Crimean War work formed the basis of a series of poems by Ciaran Carson in his collection Breaking News in 2003.

Through his unflinching writing, Russell inaugurated a new genre of journalism based on professional investigation. Influential in shaping public attitudes to the mismanagement of war, he brought its realities home to readers leading to a transformation of wartime medical treatment. Unswervingly true to himself, he is remembered for the ideals he held and for infuriating the Establishment.