The British are bluffing: a bad Brexit deal is better than no deal 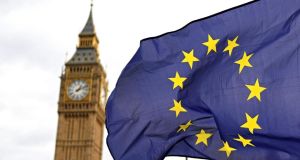 No deal is better than a bad deal. That is the negotiating position Britain is adopting as Theresa May prepares to trigger article 50 and start the formal process of Britain’s exit from the European Union. The implicit threat is that Britain is prepared to walk away and crash out of the EU with no deal rather than bow to unreasonable demands from EU negotiators.

The weakness in the British position is that everyone knows that an exit with no deal would lead to massive economic disruption and cost for everyone, but above all for Britain. And unfortunately Ireland would be badly caught in the crossfire of such a hard Brexit.

The triggering of article 50 is an event which has been built up beyond all reason. The modern-day media and political cycle is struggling to deal with the fact that Brexit is not going to happen for a few years yet. And so the precise date of the triggering of article 50 has been imbued with great significance. There was even some discussion, when it appeared that article 50 would be triggered a few weeks ago, that pretty much all our Ministers might be away at St Patrick’s Day events when it happened. It was as if the country was about to be invaded.

In fact, nothing much is going to happen next Wednesday, beyond some loud political noise from London. Europe will immediately start to formulate its response with a draft negotiating position being circulated to member states by Friday. But formal talks will not start until late May or June. And Britain will not actually leave for another two years. This is a long game.

Britain’s problems, as it enters the talks, is that while all sides would pay an economic price if it crashed out of the EU without a deal, the costs to it would be huge. It is the one of the two countries most at risk. The other one is Ireland.

Michel Barnier, the lead EU negotiator, outlined his view this week of what a “no deal “ scenario would mean. There would, just to take a few examples, be long queues of trucks at Dover, he said, chaos in air travel, disruption to nuclear shipments as Britain leaves Euratom, the EU nuclear agency, an uncertain future for British people who have retired to Spain, Romanian doctors and Polish students in the UK. And so on.

“ I can multiply the examples,” Barnier said. And the more you think about it, the more it is clear that a hard Brexit would bring almost-unimaginable chaos. Look at financial services, for example, and the issue of regulator and counterparty risk, regulation in the pharma sector and a dozen others, how Britain’s trade is managed with countries outside the EU – where it is currently part of EU deals – not to mention what happens within the EU.

What about the British car industry, where parts and finished vehicles cross between Britain and the continent? Or the factory in Wales which makes Airbus wings for assembly in Toulouse? The Guardian calculated that the total cost Britain exports would have to pay on tariffs on EU trade, in the event of no deal and a hard Brexit, would be £7.6 billion (€8.8 billion) a year, not far off Britain’s existing annual contribution to the EU.

So it is very difficult to think of any kind of Brexit deal which would be worse than no deal. Theresa May talks of a bright new future with Britain as a low-regulation, low-tax economy building trading links around the world. And maybe some day it might be. But getting from here to there – without a Brexit deal – would involve huge disruption, uncertainty, delays and costs.

If these talks start to move to the kind of brinkmanship and late-night drama typically seen in EU negotiations, this is going to get very sweaty. It could even start to have the kind of impact on economic confidence which was expected after the Brexit vote but never really happened. We must hope a calm and constructive approach can prevail. However, when you see the mood music over the first topic on the agenda - the exit Bill - you realise that this could quickly get rocky.

Ireland’s interests stand particularly exposed. We need the future of the Border to be sorted in the context of an overall deal, even if it is hard to see a situation where the current free flow of people and goods can be completely protected. The bilateral issues between the two countries - the common travel area and the common labour market - would be best sorted alongside wider EU/British negotiations.

And this is before you consider the potential disruption to trade in both directions if there is no British-EU trade deal and a hard Brexit and the wider hit this would have on the British and Irish economies. Dublin Port has warned, for example, that a yard of three hectares would be needed if checks had to be carried out on commercial and passenger traffics arriving every day. Food exporters, in particular, would face punitive tariffs sending products to the UK. There would be no guarantee on a continuation of the clear passage for Irish goods moving through the UK to continental markets. There would be massive disruption to the supply chains crossing the Border and the Irish Sea. And on and on.

No deal would be chaotic for Britain. But it would also be dire for Ireland. What we need is for the two sides to sit down at the table and stay there until a deal is done. For Ireland, as for Britain, almost any deal is better than no deal.

5 What’s the oldest woman you’ve delivered a baby to, I ask the doctor. Fifty-two, he says