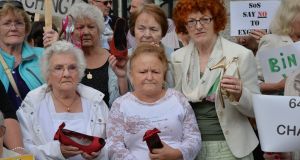 Survivors of Symphysiotomy chairwoman Marie O’Connor (far right) with members and supporters of the group: The State recently claimed to the UN Women’s Committee that in many cases consent was obtained before the pelvis-breaking procedure was performed. Photograph: Alan Betson

In 2014, the UN Human Rights Committee found that the practice of symphysiotomy constituted torture and involuntary medical experimentation. Ireland has now perfected a strategy for dealing with survivors, beginning with “delay until they die”; commissioning a narrow and restrictive report in place of an independent and comprehensive inquiry; heading off litigation with an ex gratia redress scheme accompanied by a waiver that prevents legal action; and, latterly, fighting elderly survivors to the death in court.

Two years after Dr Jacqueline Morrissey revealed the practice of symphysiotomy in this newspaper in 1999, Ireland’s Chief Medical Officer looked to the Institute of Obstetricians and Gynaecologists – the voice of the speciality responsible for these operations – for a report. The institute’s response, a one-page letter, set the foundation myth: that symphysiotomy was the norm for obstructed labour until it was “replaced” by safer Caesarean section. This falsehood continues to be repeated ad nauseam by the State to this day.

Symphysiotomy was never a norm anywhere, at any time: doctors refused to practice it because of its dangers, except as a last resort. An earlier if contradictory myth, that symphysiotomy was performed to avert the dangers of repeat Caesarean section, also endures. History shows that religious fundamentalism and medical ambition drove the surgery.

Demands for an inquiry were stymied by successive ministers for health Micheál Martin, Mary Harney, James Reilly and Leo Varadkar. Unsuccessful attempts were made to commission “reviews” from known proponents of symphysiotomy, by the Department of Health in 2003 and by the Institute of Obstetricians and Gynaecologists in 2010. All avenues led to the institute, as Survivors of Symphysiotomy discovered. The medical body was subsequently involved in the commissioning of a review whose terms of reference excluded unpublished data and survivor testimony. Hospital data detailing the clinical circumstances of these operations were not examined by the 2012 review headed by Prof Oonagh Walsh, so the basis for its conclusion that symphysiotomy was “clinically appropriate” is unclear.

As time went on, hospital records became more difficult to access. Following parliamentary questions in 2014, thousands of hospital records were “discovered” in Dublin, Cork, and Waterford. Such records may relate to women who remain unaware, even today, that they were subjected to the surgery. Having earlier supported a Bill designed to prevent the law on limitations from blocking women’s access to the courts, the government did a U-turn. The then minister for health, James Reilly, later refused to settle survivors’ legal actions, preferring instead to introduce an ex gratia payment scheme calculated to save the State €60 million.

On October 14th of this year, the Court of Appeal dismissed a case involving a symphysiotomy performed in the Coombe Hospital in 1963 on a 24-year-old woman, twelve days before the birth of her first child. She has suffered grievously since that day, like so many other women, yet all the State had to offer by way of compensation was a scheme that carried no admission of wrongdoing and forced survivors to indemnify their abusers as a condition of payment.

The truth is that symphysiotomy destroyed lives. Relationships were damaged, and marriages occasionally buckled. Many women walk with a permanent limp and live out their lives in chronic pain. As one 85-year-old survivor of symphysiotomy in Wicklow said: “every time I look at a crucifix, it reminds me of me. It’s been a daily crucifixion”.

Still promoting the view that they were acceptable, the government now denies that these operations were involuntary. In a fresh falsehood, the State recently claimed to the UN Women’s Committee (CEDAW) that in many cases consent was obtained, as though any woman would knowingly consent to having her pelvis broken as an alternative to Caesarean section.

The UN found that 1,500 of these operations had been carried out without patient consent. These operations breached women’s constitutional and human rights, yet no person or agency has ever been held to account. This lack of accountability fosters a climate in which wrongs come to be regarded as acceptable, and society minimises its perception of the damage done to victims. The Irish Human Rights and Equality Commission will now be asked to reconsider its decision not to hold an inquiry, and Survivors of Symphysiotomy is preparing to appear before the UN’s Committee Against Torture and CEDAW. Ireland’s culture of impunity must end.

Marie O’Connor is a contributor to “Irish Women Reflect: A Century of Change”, edited by Alan Hayes and Máire Meagher and published by Arlen House. She is Chairperson of Survivors of Symphysiotomy

4 What is unionism without the union? The question has us spooked

5 Scramble to fix problems with vaccination and mandatory quarantine programmes