As the final battlefield of the 1916 Rising, it deserves its national monument designation 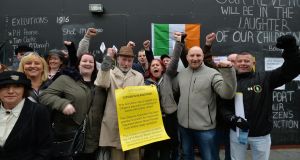 The Save Moore Street 2016 campaigners celebrate the High Court verdict designating the street as a national monument. Photograph: Alan Betson

If it wasn’t for the National Graves Association, along with relatives of those involved in the 1916 Rising, the Save 16 Moore Street campaign and some committed politicians, the whole area would have been demolished long ago.

The High Court accepted this view of the last “battle site” of the Rising in delivering its judgment last Friday that nearly all of the buildings on the east side of Moore Street as well as the laneways leading into it collectively constitute a national monument.

This writer is as surprised as anyone by the judgment, as I feared that the campaigners were on a hiding to nothing in taking their case to the High Court at this stage. The last thing I anticipated was that they would win hands-down, leaving the Government in a serious quandary.

Mr Justice Max Barrett’s extraordinary ruling is monumental in itself, running to 73 chapters over 399 pages, and the judge clearly entered into the spirit of things as the centenary of the Rising is about to be commemorated, capturing the zeitgeist.

Like Judge Liam Hamilton in the equally contentious Wood Quay case years earlier, Mr Justice Barrett visited the Moore Street site before hearing the case, and it made a deep impression on him. This is obvious from his description of the room in No 16 where the 1916 leaders decided to surrender.

“The stark simplicity of the room . . . resonates with history,” he wrote. “To think that Connolly once lay wounded in the far corner, with other members of the provisional government, all of them signatories to the Proclamation, gathered around him for a council of war sends a chill down the spine.”

The judge, previously a corporate lawyer, began his judgment by reconstructing the events surrounding the republican combatants’ evacuation of the GPO – by then “completely in flames” – to seek sanctuary on Moore Street, relying heavily on a nearly contemporaneous account by nurse Elizabeth O’Farrell.

He also drew extensively on witness statements made to the Bureau of Military History years later by surviving combatants, before concluding that the whole area was a battle site deserving of protection under the National Monuments Acts.

Mr Justice Barrett noted that eight republican combatants were killed in the area as well as four British soldiers and 11 civilians, including a nine-year-old child.

The O’Rahilly was one of the casualties. “The path where he lay is gone but it was not difficult to think of him lying there, callously left to bleed, his life ebbing slowly from him.”

The judge gave short shrift to claims made on behalf of acting Minister for Arts and Heritage Heather Humphreys that plaintiff Colm Moore, a nominee of the 1916 Relatives Association, was engaged in an “abuse of process” in taking his case for a more extensive definition of the area needing protection, beyond the four buildings covered by a 2007 preservation order.

It was claimed that Mr Moore “has no real gripe against the State, and that his true intention is to frustrate Chartered Land in its development of a plot of land and properties sometimes referred to as “Dublin Central”. Notwithstanding that this is a most serious contention to make, no evidence has been advanced by the Minister’s legal team to support it.”

His judgment also made it abundantly clear that national monuments do not require ministerial designation; once they fulfil objective criteria relating to architectural, historical or cultural value, they already constitute monuments. The Minister’s only role is to make preservation orders, or not to make them.

In the Moore Street case, ministerial consent permitting the demolition of buildings on either side of the four covered by the 2007 order – made by then minister for heritage Dick Roche – required that “substantive works shall commence on site within three months of approval of the revised project design”.

Mr Justice Barrett rejected a claim by Gráinne Shaffrey, principal of conservation architects Shaffrey Associates (acting for Chartered Land) that this condition had been complied with, saying that a letter she wrote indicating that “Phase 1 works” would start several months later was “something that glinted in the great coal-pile of affidavits”.

“As the consent of July 2013 is conditional upon the commencement of substantive works by 30th July 2014, that consent – as varied in April 2014 and purportedly revised in September 2015 – must and does fall,” the judge ruled. As a result, if any work is to be carried out on the site, a new ministerial consent would be required.

Chartered Land’s proposed commercial redevelopment of the Carlton site on O’Connell Street will also need to be substantially redesigned in the wake of this judgment because it would “effectively obliterate the laneways and buildings of this battlefield site, leaving only Nos 14-17 Moore Street standing”, the judge noted.

Dealing with why only these four buildings were subject to a ministerial preservation order, he agreed with the view that this was intended to minimise impact on the Carlton scheme. As for the cost – €4 million for their acquisition and some €6 million to turn them into a commemorative centre – he said “no cost criteria” applied to national monuments.

Dr Lynham warned that the Chartered Land scheme would “radically alter the street pattern of the area”.

Humphreys – or, indeed, Chartered Land – may appeal to the Supreme Court, although this would be perceived by many as swimming against the tide.

Furthermore, a large vinyl banner in front of 14-17 Moore Street marking the 1916 centenary must be taken down after Mr Justice Barrett ruled that it was unauthorised, in a final slap in the face to the Minister.

1 Can I eat, drink, hug? How to visit a person’s house safely from June 8th
2 How an exercise programme facilitated the spread of coronavirus
3 Kenneth Branagh: ‘It’s a challenge, Irishness in cinema’
4 Former Kilkenny hurler dies after bike struck by tractor
5 Why you still can’t have a European holiday this summer. Or can you?
Real news has value SUBSCRIBE